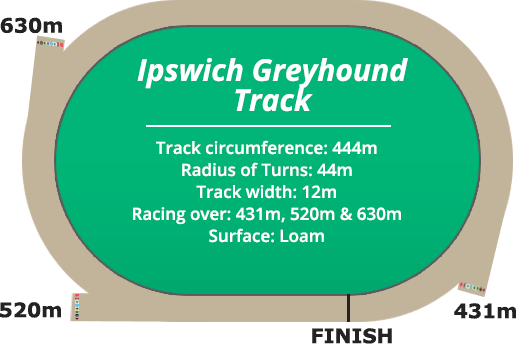 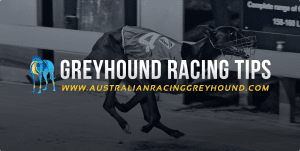 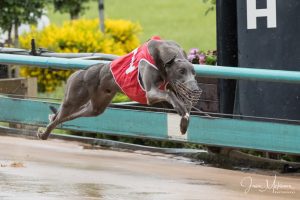 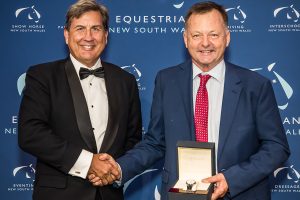 The Ipswich course would currently rank as the second most important in Queensland. Racing is conducted on a two-turn loam track at the Ipswich Showgrounds over distances of 431, 520, 630, and 732 metres.

The first meeting in Ipswich was held on the Bundamba racecourse behind a mechanical hare on April 9 1928 and conducted by the Greyhound Coursing Association. Ten races were run over ‘about’ 500 yards (457 metres). A whippet race over 220 yards and a goat race over 440 yards completed that first race meeting.

When the Queensland government banned mechanical hare racing, ‘speed coursing’ was introduced. This consisted of ‘trained’ hares being used as the lure instead of a mechanical device. The Ipswich greyhound participants transferred their race meetings to a course built at the Brassall Coursing Club in Brassall, with the first meeting held in December 1928. Racing was held over 300 yards on this track until the end of the 1940s.

At some point a lure was permitted for use, although it had to be pulled by a horse. Records suggest the first Ipswich meeting behind what was termed ‘the dummy hare’ took place at Brassall on March 12 1951.

Late in 1954 the Queensland government passed a bill which permitted the re-introduction of mechanical lures on Queensland racetracks.

Around 1973 a new track was built at the Showgrounds and greyhound racing has been conducted here ever since.

How to bet on Ipswich greyhounds

Ipswich, like many Queensland greyhound tracks, has got wagering available upon their races at all the leading greyhound racing betting sites, with these bookies having many different bet types available. For instance you can place win/place bets, quadrellas, trifectas and even things like same race multis, which are a relatively new dogs bet type.

Punters can access these online bookmaker facilities via several different methods, including via mobile betting apps, which is probably the no.1 way Australians wager in 2022. Having said this, it is also possible to wager on greyhound racing held at Ipswich, if you are based overseas, with betting sites in places like the UK, USA, Ireland and New Zealand, just some of the places that have extensive markets available on this sport.

In summary, Ipswich betting sites will take a few minutes to sign up at and as long as you have a bank account, or access to a bookie deposit method, you can begin wagering within minutes.