A quadrella, more commonly known as a quaddie, is one of the most popular forms of exotic bets with many leading online bookmakers, requiring punters to correctly identify the winners of four designated greyhound events at a single meeting. Horse racing punters will be familiar with the quadrella with it being one of the most popular types of bets for those chasing a big pay day.

While it sounds simple, landing the quaddie can be an extremely tough challenge with variables such as early speed, strength, box draw, tenacity, recent form and running patterns all affecting the results of each race. Because it is so tricky to land all the winners, most punters select more than one greyhound for each leg, any of which are able to win for the bet to be successful.

While this increases your chances of landing the winning bet, it is important to note the more greyhounds included in the bet, the more it will cost to secure a full percentage of the winning dividend.

An example of a well-placed greyhound quaddie

The following quaddie has five selections in the opening leg (or race), three in the second leg, just one in the third leg and five in the final leg.

The winning dividend is announced after the running of the last leg and is calculated by splitting the amount of money invested in the total quaddie pool between the successful punters.

Things to consider when placing a quaddie bet

Study your form:
It is nearly impossible to fluke the quaddie at any given greyhound meeting. While you may be lucky enough to back an occasional winner without looking at the runner’s statistics; quaddies require punters to know plenty about the greyhounds in each race as you will only receive a payout if you can identify all four winners. 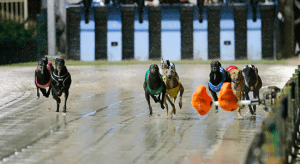 To pick the winners it is important to understand each greyhound’s traits – box manners, early speed, draw, fitness, tenacity, strength and whether they are a railer or a wide runner all play a part in determining the finish and which greyhound will cross the line first. While you are never going to be able to pick the winner every time, you will be far more successful if you learn how to study and analyse the form and interpret that in the context of an upcoming race.

Also, while quaddies can pay handsomely, they can also result in a pretty measly payout if there are no roughies among the winners as more people would have put the favourites into their numbers. Say for instance your quaddie costs you $120 to put on and at the end of race eight you have a winning ticket, if three of the four legs resulted in favourites winning, the dividend may only be around $100 itself – meaning that it has actually cost you money to have a bet, even though it was successful.

Include some value:
While it would be very rare for 50/1 shots to win each leg of a quaddie, short priced favourites don’t necessarily win each race either. With so many variables in the sport of greyhound racing, there is value to be found and this should be reflected in your quaddie numbers accordingly. Studying the form will help you to spot greyhounds that may have a genuine winning chance, even if the market does not suggest so.

Watch out for jackpots and special offers:
Because quaddies are so popular, it is not uncommon for there to be special jackpots at certain meetings. For example, more money may be added to the betting pools on feature nights such as the Golden Easter Egg at Wentworth Park. More money in the pools results in a greater amount that can be divided up between the winners, while it also attracts more punters trying to snare the extra cash, pushing the total amount in the pool up even higher.

Don’t be late!:
All quaddie bets for a particular meeting must be placed prior to the commencement of the first leg. When placing a quaddie, punters must selected their chosen runners for each of the four legs after which they will be given a percentage of the dividend based on the amount of money which is outlaid for the wager.

After all the hard work is done picking your numbers, all you have to do is sit back and cheer on your runners – hopefully you will have plenty to celebrate after the fourth leg is run and won.