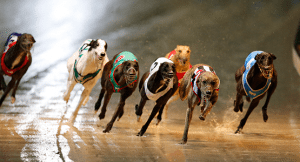 NAMED after the most iconic race caller greyhound racing has seen, Paul Ambrosoli, the Group 3 Ambrosoli is a sought after trophy run on Golden Easter Egg final night each year.

The race is essentially a consolation of the Egg itself, with greyhounds which placed third and fourth in the Egg semi finals the week prior gaining a start in the $25,000 to the winner event.

We have all the information on the race below, including its history, past winners and the best bookies to bet on the feature with.

More often than not, the Ambrosoli is packed with as much quality as the main race of the night, so there is always a lot of betting interest in the final.

As such, many of our recommended online bookmakers will have fixed odds betting available in the lead up to the race as soon as the final field has been decided and the box draw has been conducted.

All of the below bookmakers offer betting on the Ambrosoli as well as some fantastic sign up offers to help give you more bang for your buck.

With the 2020 final not being run until April, it is far too early to have an idea on the market for the feature, however we will ensure this page is kept up to date with the latest news and betting information in the weeks prior to the jump.

A history of the Ambrosoli

Formerly known as the Golden Easter Egg Consolation, the race was run and won for the first time in 2004 and has been of group 3 status since its inception.

The event was renamed The Ambrosoli in 2009 to recognise the contribution of race caller Paul Ambrosoli to the sport and in particular at Wentworth Park. Despite now being retired from calling, ‘PA’ is still commonly referred to as the voice of greyhound racing, with the living legend also a member of the Australian Greyhound Racing Association Hall Of Fame.

True Kihael won the first running of the race after it was renamed the Ambrosoli, scoring in emphatic fashion to register a blistering 29.82 success.

The following year the race was taken out by a true champion of the modern era in Cinder Shelby which would later retire as a three time group 1 winner – a testament to the quality of greyhounds which contest the race. Trained by Kel Greenough, Cindeen Shelby clocked a faster time (29.91) than Cosmic Rumble (30.12) which came out and won the $250,000 Golden Easter Egg later that night.