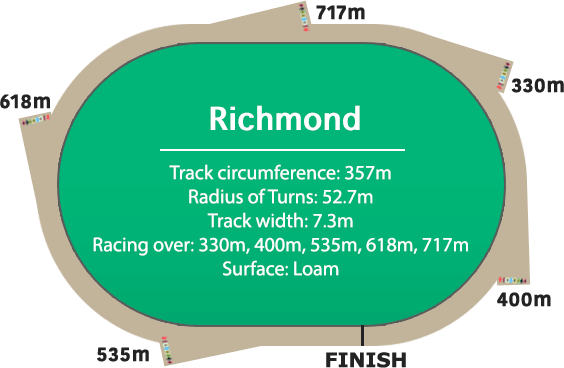 Richmond is one of the leading provincial greyhound tracks in New South Wales racing on Saturday nights and Wednesday evenings throughout the year. The track is a two turn loam circuit racing over 330, 400, 535, 618 and 717 metres.

The track, based at Londonderry, was first opened as a thoroughbred and harness track and held its first meeting on December 17, 1912. Aside from four years during the depression, the track has continually held race meetings until the present day.

Until the late 1930s, the club usually held between 4-5 race meetings a year with saddle horses competing against those driven in sulkies.

The gallops ceased racing at Richmond in 1952 and the Club then operated solely with its trotting licence until October 1955 when greyhound racing was introduced on the straight track on site on Saturday afternoons.

The 110 acre property that the racetrack was built upon was purchased by the Club in 1958 for £17,500. Shortly after the purchase, the Londonderry Trotting and Race Club limited was established. Nine years later, the club changed its name to the Richmond Race Club Ltd and continued on with conducting both trotting and greyhound races.

Richmond developed a new grass circle track for greyhound racing in 1968 and started holding non-tab race meetings on it until the March 28, 1969, when the track was granted full TAB coverage.

It was an additional two years until harness racing at Richmond also received TAB coverage.

Thanks to the administration of Elwin Holmes, John Varley and Frank Kennedy during the 1970s, Richmond became the leading provincial track in the state. Kennedy was responsible for Richmond becoming the first greyhound club to have their races shown on television when Channel 7 showed replays of events on a show Kennedy hosted, Punter’s Post Mortem.

In 1987 the Richmond Club Committee met with the NSW Harness Racing Authority to discuss the future of the current grass track and changes they wished to make. Subsequently, the harness track closed for six months in August 1987 before re-opening on March 28, 1988. Ten years later, on December 30, 1997, the last harness meeting was held at Richmond.

What were the racing distances on the Richmond straight track and did Zoom Top win there and hold the record?

Richmond has a 324m Straight