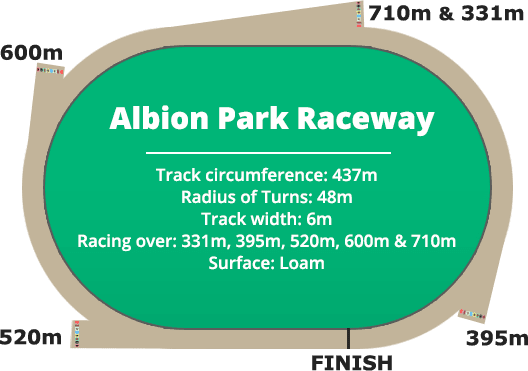 The Albion Park track held its first race meeting on February 11, 1993. Previously, night racing in the Brisbane area had taken place at the Gabba, where racing commenced in 1972.

The Gabba track shut down in the early 1990s when the Queensland Government decided to increase the size of the Gabba sporting ground. The track, built on the outside of the existing sporting oval, was relocated to Albion Park, with the Gabba later redeveloped to became then home of Sheffield Shield, Test cricket and the Brisbane Lions AFL Club.

There was no downtime for city racing between the closing of the Gabba and the opening of Albion Park, with the Gabba hosting its last meeting on February 4, 1993.

Unlike the old grass surface at the Gabba, the new two-turn Albion Park track offered a sand surface which allowed for greater use under vigorous racing conditions and more durability in inclement weather conditions.

The only major works to have happened at Albion Park commenced in October 2014 and included upgrades to the existing racing surface, with all regular meetings conducted at the track moved to the Ipswich Greyhound racing club to allow the works to be completed.