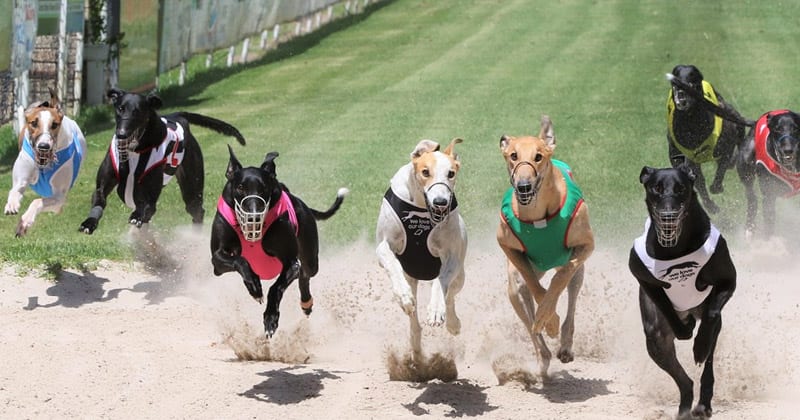 The Capalaba Coursing Club Proprietary Limited was established in 1947 with grounds for racing set up on land owned by John Federicks and leased by him to the club. This first venture was a straight track over 290 yards (265 metres), although races were run to 280 yards. The new club was associated with the National Coursing Association (NCA). There were 12 dogs drawn for each race and events included hurdles. In order to keep the racing competitive, handicapping was introduced. The starting boxes were staggered and incorporated a series of ropes coming together at one central point where a lever was pulled to allow all the boxes to open together.

The first meeting took place on 28 February 1949. First prize money was £5 ($10) and the first race, which consisted of a field of only nine runners, was won by Lucky Ring, trained by Frank Fielder, who later became the treasurer of the Queensland Greyhound Breeders, Owners, and Trainers’ Association. There were eight straight races and one hurdle, for maidens.

In 1950 a breakaway group of owners and trainers obtained a licence to build another track, under the auspices of the Incapacitated and Wounded Sailors, Soldiers, and Airmen’s Association. The track was built where Smith Street is today. It was also a straight course, over 300 yards, that ran parallel to Redland Bay Road and held daytime meetings every Tuesday and Saturday. It held its first meeting on 23 June 1951 and had the honour of being the first greyhound track in Queensland to set up a photo-finish system. It also had the first female bookmaker’s clerk, the wife of the bookmaker G. H. Macdonald.

At this first meeting, officials from the National Coursing Association watched from the roadway and all greyhounds which took part in the meeting were subsequently disqualified from racing on tracks controlled by the NCA.

A couple of weeks later this second Capalaba track was subjected to a ban by the NSW Greyhound Racing Control Board, who issued a notice to NSW owners and trainers in August 1951 warning them from nominating greyhounds under threat of a ban by the National Coursing Association of Queensland.

Both Capalaba tracks had up to 25 bookmakers on course.

At this time the only states allowing mechanical lures were NSW and Tasmania. In Victoria and Queensland the government ruled there could be no mechanical devices used as lures, and so live hares were used instead. Queensland had banned the use of the so-called ‘tin hare’ in 1930.

The hare was given a 200 yards head start, but if it stopped before reaching the escape pen, children with cans were employed to make enough noise to get the hare moving again.

The non-NCA Capalaba track closed in early 1952. The current Capalaba website suggests this was because ‘there were not enough greyhounds to service both courses’. In reality, the fierce opposition of the NCA and apparent anomalies in the accounts of the Incapacitated and Wounded Sailors, Soldiers, and Airmen’s Association helped in its demise, after only six months or so of racing.

In 1951 fields were reduced to 10 starters only and live hares were discontinued. Instead, a horse pulled a rope that was attached at one end to an artificial hare. The rider had the other end attached to a car tyre which was wrapped around his waist. The rope was pulled around a pole sited in the old escape area and the horse was ridden off at a 45-degree angle allowing the rider to control the speed of the lure.

In the mid-1950s the government finally permitted mechanical means to be used as lures.

In 1987 the track moved to its present site, closer to Tingalpa Creek.

Racing is now conducted only over the 366 metres distance, up the straight on a grass track. Major events are the Capalaba Cup, Capalaba Derby and Capalaba Futurity. None of the feature events held at the course have either Group or Listed status.