Warrior King (7) has proven the old saying true by taking out the Group Two Bendigo Cup on Friday night; the cream always rises to the top.

Warrior King was the most experienced Group performer in the race and as race leader Senor Socks (8) turned for home, all eyes were on the fast finishing 35kg red brindle dog as he careered around the home turn to set off after Senor Socks.

Talented youngster Luca Neveelk (4) was sent to the boxes as favourite but he didn’t begin as well as he needed to and finished fifth.

Pippa Shiraz (1) won the start but was soon headed by kennelmate Senor Socks (8) and eventually dropped out to last. 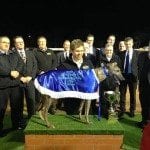 Third placegetter White Spyro (5) began well enough but couldn’t get to the rail. Once she did, Warrior King was already upon her and the best she could do was hang on for a minor placing. Elite Devil (6) filled out the top four.