THE voice of Western Australian greyhound racing, Peter O’Neill, will pick up the binoculars and microphone to call his 10th Group 1 Perth Cup at Cannington on Saturday night.

The 47-year-old has a burning passion for for the sport shared by few others, with many sure to be surprised that his background was in the thoroughbred and harness racing codes.

“I was brought up on a wheat and sheep farm until I was 15 and when I was a child my father was a racehorse trainer and amateur jockey in Narrogin,” O’Neill told Australian Racing Greyhound.

“From a young age I used to get on a swing that had a wooden plank in the middle and I would get my dad’s whip and I would ride the swing and call the race as if I was the jockey and also the commentator which worked out well because I would always win the race.

“Back then dad was also a casual trot race caller around the country areas such as Narrogin, Wagin and Katanning.

“I used to go to the trots with my dad and sister at a young age and we used to tape his race calls onto a cassette and we would sell them to the trotting trainers for a few dollars to make some pocket money.”

In the early days, O’Neill desired to become a jockey, however that dream was short-lived and he found himself in the city throughout his teenage years.

“I went to school in the city and got a job at a bank and while I was working there I did a phantom call of the Melbourne Cup using the staff as the jockey’s names,” he recalled.

“As it turns out one of the ladies I was working with, her uncle was a trot commentator so she introduced me to him and at 17 years of age I went to Gloucester Park and started calling trials and I would go to the country tracks with him and call one race per meeting.”

Alarmingly, while he was still working at the bank, O’Neill was involved in a hold up which subsequently saw a change of direction when he was transferred to Kalgoorlie. However, it turned out to be a blessing in disguise with O’Neill quickly making a name for himself calling the country race meetings around the area.

“I was there for two years and then I moved back to the city and Craig Evans, who was the greyhound commentator at the time, needed a back-up caller,” he said.

“For the next three months I went and tried to call the greyhound races but I just couldn’t put it together, they were too quick for me.

“One day it just all clicked and from there I have gone on to the stage where I am at the moment where I call 50 per cent of the greyhound meetings.

“I call the metropolitan track at Cannington and Ryan Levitzke calls Mandurah and Northam.”

O’Neill says he never expected to fall for greyhound racing, but they are now very close to his heart.

“I just love the animals and watching them move and I love being able to describe some of the amazing things they can do to the people who are listening,” he said.

“People sometimes say I own greyhounds because I am passionate towards some of them when I call them, but the thrill I get watching certain dogs is almost like I do own them.”

While he has seen a plethora of greats during his time behind the microphone, O’Neill rates WA star Reggemite, a winner of 34 races and the inaugural Sandown Shootout, as his all time favourite, while he also loved the mighty Miata, Australia’s former highest stakes earner who is often regarded as the best greyhound to have come out of the West.

“When Miata came along everyone in Western Australia claimed her because she kept breaking records and we hadn’t seen anything like her for a long period of time,” he said.

“At that time the greyhound racing industry had been through a bit of a downturn and she came along and lifted it back up again.

“Because of that she is definitely one of my favourites, but I just love seeing greyhound trainers and owners breeding a greyhound, raising it and bringing it through to the track and having that success — whether it is a maiden or a group 1 race.” 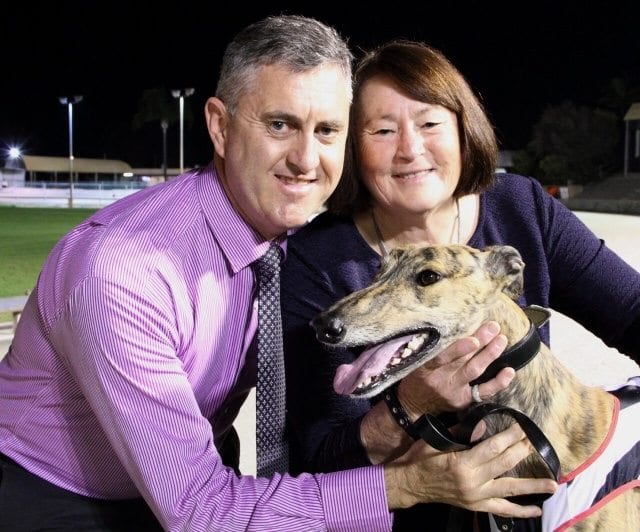 Peter O’Neill with his mother Maxine cuddle up to a greyhound at Cannington.

And O’Neill hasn’t just seen all the former greats on the track, but has also experienced some colossal changes to the sport during his time at the helm of broadcasting, most recently with the closure of the old Cannington track followed by the re-opening of a brand new $22 million complex earlier this year.

“The track itself has been a real commitment by Racing and Wagering WA and Greyhounds WA to commit to having a metropolitan track because at one point it looked like we were going to lose our city venue,” he said.

“While the live baiting was on the east coast, it still effected us in a dramatic way and to go through all that at the same time as losing our metropolitan track, it was huge.

“It was a difficult time for the industry over here, but now that the new track is up and running it is very positive.

“The track is very different from the old Cannington as Greyhounds WA have designed it to be softer after doing research over in America that there are less injuries on softer tracks.

“It was great for WA to see 24 Eastern States greyhounds over here for the heats – it was a bit of uncertainty whether we would see the likes of Jason Thompson and Andrea Dailly sending their greyhounds across.”

Saturday night’s race will mark the first running of the Perth Cup and Galaxy at the new venue, with O’Neill offering his thoughts on the leading contenders in each race.

“Keith Harding has the favourite in box one for the Galaxy which is a dog by the name of Seeking Justice,” he said.

“He formerly raced in the eastern states and was a very strong greyhound so he is suited by the track here as the sand is heavy.

“Keith Harding is like the Bart Cummings of staying trainers here in WA and he won the race in 2008 with Elecktra as well as the first running (in 1982) with Afro Freeway.

“Other dogs to watch out for include Hodor which was bred and is now trained by Jamie Marsh and he was having his first start over the 700 last week when he won his heat, while Sean Kavanagh’s Alka Casey only finished a couple of lengths behind Seeking Justice in his heat and he got severely checked going down the back straight.

“And then of course you also have Lioness Lulu for Mark Giddings. Mark’s father passed away recently and his funeral was on Monday so for him to be able to win would be pretty special.”

And as for the Cup, O’Neill says it is very open.

“There is a lot of speed in boxes one, two and three and you could probably make a case for every runner in the field on Saturday night,” he said.

“The way the track is playing out we are finding it is difficult for dogs to come from behind in sprint races and swoop like they do at other tracks.

“Because the sand is soft the dogs seem to be staying down on the fence so instead of being three and four off the fence they normally just two wide and that results in greyhounds coming from behind running into dead ends.”

With the bias favouring dogs racing on the speed, O’Neill has selected the two red rugged runners to salute in Saturday’s main features.

“No dogs won from box one in any of the heats last week, but I will be tipping both Seeking Justice and Ima Wagtail ($4.50 with Sportsbet.com.au) for the two group 1s on Saturday night as I think they can both lead and if they do I think they will be very hard to run down.”

And as for his favourite final, O’Neill quickly identified the 2008 Galaxy, won by former WA marvel Electra, as one of the most memorable races he has called.

“She was an old greyhound who came across from Victoria and she was trained by Keith Harding,” he said.

“I said two months out to Keith and a number of other trainers that she would win the Galaxy and they all laughed.

“She had a massive following here in WA because she would fall out of the boxes and tail off last and then start weaving her way through the field.

“In the final she did exactly that and myself and the crowd picked her up going down the back straight starting to make ground and when she got up and won my excitement levels were extreme.”

With the pressure mounting ahead of this year’s races, O’Neill says he will just be treating both features like any event to ensure the nerves don’t get the better of him this weekend.

“I went across to Melbourne in 2007 and I watched Betty’s Angel win the Melbourne Cup and I asked Paul Bartolo whether he would bring her over to Perth which he did and she became the first Melbourne Cup – Perth Cup winner,” he said.

“That was the first Perth Cup I called and I remember I went to the beach that morning to make sure I was relaxed, but as soon as I arrived at Cannington I was a mess, I started sweating and shaking.

“After that I learnt just to take it as it comes. I got told by a friend once to try and make all races the same and I try to do that, although there is always that little bit of extra excitement going into a group 1.”

Sign-up with Sportsbet and claim up to $501 in bonus bets to place on the Perth Cup and Galaxy finals.

Loved his calls of miata’s races.
And his call of Sweet It Is winning the national distance final in perth will never be forgotten.
Great work Pete.

Peter is an outstnding racecaller and a credit to his profession. Don’t know if he has a bet, but if he does you would never know by his call, which is the sigh of a true professional.
Very well written Kat, great tribute to a great caller.

Loved his calls of miata’s races.

And his call of Sweet It Is winning the national distance final in perth will never be forgotten.

Peter is an outstnding racecaller and a credit to his profession. Don’t know if he has a bet, but if he does you would never know by his call, which is the sign of a true professional.

Roger Clark Hi Roger, We met Peter in Venice recently. I want to make contact again as we owe him a Supper!, is it possible you could help me with his email address in Perth or that of Fox there. Many Thanks, Chris Norman  chris.norman@btclick.com