BESSY Boo broke a 16-year-old record when winning his 26th race at Wentworth Park on Wednesday night, eclipsing the existing feat for the most amount of wins at the Ultimo circuit.

The benchmark was formerly set by Stately Bird, with the son of Black Shiraz and Dollar Bird accumulating 25 victories over the 520m trip between May 1999 and October 2000.

Beginning well from box one, the son of Bekim Bale and My Black Bess was able to punch up on the inside in the run to the line on the first occasion, assuming the lead around the first turn. Out on the bunny it was a case of times and margins, with the powerhouse chaser charging clear to score by three and three quarter lengths in a sizzling 29.71.

Alan Proctor, who trains the evergreen greyhound with his wife Christine, was in awe of Bessy Boo following the run.

“He is one in a million,” Proctor told Australian Racing Greyhound.

“I have had dogs for 45 years and I have never had one like him – he just loves racing and he is very competitive.

“Amazingly he has never had a spell and he has never been injured – pretty impressive considering he has been racing top grade dogs for most of his life.

“The scary thing is if they had a 600m start at Wentworth Park like every other metropolitan track in Australia I think he would have picked up another 10 wins because the middle distance is his forte.”

Bessy Boo’s wins at Wentworth Park have been spread out over both distances, with 23 victories over the sprint and three over the testing 720m staying trip.

“I put him over the 720m when he was young because he was coming out slow and getting knocked around and he won three races in good time,” Proctor said.

“But I decided to drop him back to the 500 and I am glad I did because he is just so competitive and he has had a remarkable career.”

Tipping the scales at just over 30 kilograms, Bessy Boo (pictured right with Christine and Alan) has now had 119 starts for 36 wins and 42 minor placings, his most notable victory being a win in the 2014 Group 1 Peter Mosman Classic at Wentworth Park. 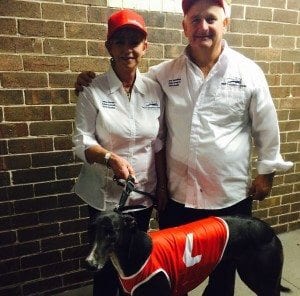 Despite giving the Proctors their first win at the highest level with that triumph, Alan said Wednesday’s victory was even more special.

“I won the Ladies Bracelet with Lucy Lawless and she won 20 races at Wentworth Park herself and we also won the Peter Mosman with Bessy earlier in his career – but I think this is the biggest achievement of them all.

“To get a dog to win more races than any other dog on a city track – it’s just incredible for the dog.

“It’s not like he is a dog which jumps to the front and on the bunny – that would have made it a lot easier for him – but he is a back marker and he comes from the back nearly every start.”

It has also been a whirlwind experience for owner Ashley Wilson, who was given Bessy Boo as a wedding present when he was just a pup. Not knowing their gift was a male, Wilson and her husband Hayden named the youngster Bessy Boo – and the rest is now history.

Proctor says Bessy Boo’s owners have been terrific supporters of the greyhound throughout his career.

“Ashley and her husband are there all the time – they are great supporters – and even though they both work full time they were both there late last night cheering him on,” he said.

Despite turning four years of age last month, Proctor has no plans of retiring his grand campaigner and says he will let Bessy tell him when he has had enough.

“I can see in his face he is starting to get a few grey hairs – but at the moment he still loves to race and he loves going out and winning,” he said.

“It doesn’t knock him around and he doesn’t pull up distressed at all.

“I actually couldn’t hold on to him this morning. When I got him out of his kennel he nearly knocked me over – all he wants to do is go – so he has pulled up well.

“For now we will keep going with him, but we won’t push him. He will let us know when he has had enough and when that day comes he will be retired.

“It is going to be a very sad day when he finally does retire – but at the same time we are very thankful for everything he has done for us and at least we have had him to enjoy the ride.

“He is a wonderful animal and he will have a home here with us for life.”