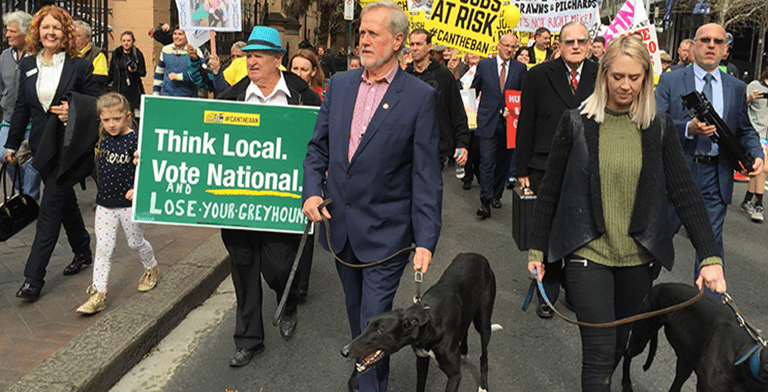 SHOOTERS, Fishers and Farmers Party MLC Robert Borsak has accused the government of attempting to “ban the greyhound industry by stealth” following its response to the recommendations put forward by the Greyhound Industry Reform Panel.

The government announced on Tuesday that it would be adopting 121 of the 122 recommendations made by the panel, which was led by former Premier Morris Iemma.

In a press release, Minister for Racing Paul Toole said the “government is absolutely committed to a sustainable future for the greyhound industry and these reforms will help ensure confidence and integrity is restored”.

The release also detailed plans for the industry to receive $41 million in funding from the state government over the next five years in order to implement the recommendations put forward by the panel.

However, Borsak has condemned the announcement, claiming it does not do enough to ensure the future viability of the NSW greyhound racing industry.

“The government has yet again failed the greyhound racing industry in its attempts to re-structure the industry.

“Nothing has been mentioned to address the needs of the industry in the future as far as sustainability is concerned – Mr Iemma recommended that the industry be re-financed, but the government has completely ignored that and told a terrible lie that they actually support that recommendation – nowhere in what they have given us today does it say that they will actually do that.

“The $41 million package they are talking about over the next five years does nothing for the future sustainability of the industry.”

Borsak said the government has ‘noted’ recommendation 118 of the reform panel’s report, which suggested it ‘consider intervening to increase revenue to support the greyhound industry meet the additional welfare, integrity costs and operational costs of the integrity commission and industry’.

However, he said neither the government or the opposition are committed to overturning the intercode agreement or the tax harmonization scheme.

Borsak fears the lack of dedication by the major political parties may force the greyhound industry’s closure if nothing is done to rectify the current funding arrangements.

“We have had discussions with both Labor and the Government and neither have the appetite to adjust the intercode agreement… nor would [the government] accept an adjustment to the tax harmonisation arrangements that were put in place in 2015,” he said.

“We are at a loss to understand where the industry is going to get the extra revenue it is going to need just to continue functioning at current levels into the future.

“Everybody knows that there will be extra requirements put in place on trainers, owners and breeders for the future – so where is the extra prize money going to come from that is going to generate a return which will allow for this money to be spent?

“The reality is the government haven’t addressed that in any way, shape, or form – what we see this being is a ban by stealth – the government is setting up the greyhound racing industry for long term failure yet again.

“The industry can’t continue to function at current levels without the opportunity to grow and increase its revenue.

“Any growth that may occur in the future, whatever extra revenue which may be derived, will be siphoned off into new animal welfare requirements and into new regulation requirements and the industry won’t have the chance to do what it needs to do.”

Borsak did concede the industry is better off with the $41 million than without it, but said there is currently no way of knowing whether the funding will be enough to complete the re-structure of the industry to get greyhound racing back on its feet.

“It is made of two parts – $30 million relating to capital works on various tracks around the state and other animal welfare issues, but we would say that nobody knows what that [monetary] figure should be,” he said.

“That figure should not be committed until such time as the commercial arm of the industry has been set up and there is the opportunity to evaluate what the financial requirements of the industry will be in the future.

“There is also $11 million which we are told will be used to set up the Integrity Commission – but once again we have no idea if that amount will be adequate to restructure the industry.

“At the end of the day the industry is getting an additional $41 million – but you can see where that money is going to be chewed up and there is not going to be anything extra which will allow the industry to get any greater return than it was getting before.

“You could argue that after the five years is up, unless a new package is going to be put in place, the industry will have less revenue and will then be forced to commercially be downsized.

“This will lead to the demise of greyhound racing in New South Wales, which is what Mike Baird and Troy Grant wanted all along.”

The Shooters, Fishers and Farmers Party had previously announced plans to block the repeal bill in an effort to ensure the greyhound industry receives proper funding. However, Borsak says his party will now be attempting to make amendments concerning the sport’s viability to the new legislation.

“The Shooters Fishers and Farmers Party will be amending any legislative measures that come before Parliament to make sure that greyhound racing has a future in new South Wales.

“It’s clear that the Coalition Government and the Labor Opposition don’t have the guts to take on the powerful horse racing industry and change the inter-code agreement,” Borsak said.

“It’s a complete Furphy that the Government has no power to change the inter-code agreement. The New South Wales Government meddles in private commercial arrangements all the time.

“Instead we will introduce adjustments to tax harmonization payments to benefit greyhound racing. This is a sustainable, market-based solution that will not harm the horse racing codes and will keep greyhound racing financially viable.”