Chariot Supreme has tonight been announced as one of the inaugural 36 inductees in to the Victorian Greyhound Racing Hall Of Fame.

Kevin and Robyn Richards’ Blue Gums Stud was the “Home of Champions”.

The husband-and-wife team bred, reared and raced a host of future stars from their picturesque 35-acre greyhound complex nestled among the rolling hills of Neerim South.

But one greyhound, in particular, still tugs at their heart strings – Chariot Supreme.

The Richards’ first laid eyes on Chariot Supreme as a pup, rearing a July 1981 litter for the Rounds family of Pearcedale.

But little did they realise Chariot Supreme would eventually make his way back to Blue Gums Stud.

“He injured his hock shortly after winning the Silver Chief and I thought it would be a good opportunity to buy him,” said Kevin Richards, now living in Mornington.

“Alan Lester, a Traralgon businessman, had commissioned me to buy a dog, so I approached Ray Rounds. 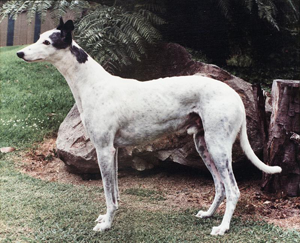 “We took a punt on him, and he went on to win a Sale Cup and Warragul Cup, and make an Australian Cup final. In all, he won 19 races from 30 starts,” Richards said.

“He wasn’t a good beginner, but he had unbelievable mid-race acceleration… He was a speed dog,” Richards said.

“His greatest win was the Silver Chief, but for me it was the Warragul Cup as I was a director of the club for more than 20 years.”

Initially, Chariot Supreme wasn’t all that popular with breeders and Richards had to promote him heavily at stud to get him off the ground as a sire.

But the ever astute Richards had mated his brood matron Shining Light with Chariot Supreme while he was recuperating from his hock injury.

And the resultant progeny – Shining Chariot, Chariot Of Gods, Chariot Of Light, Chariot Power and Supa Dupa – set him on a path to stud stardom.

“Quite simply, he threw early pace into his pups.”

Chariot Supreme, who passed away on December 15, 1992, was buried on the Warragul GRC premises.

Richards said the induction of Chariot Supreme into the Victorian greyhound racing Hall of Fame was a “great honour”.

“It’s fantastic to see him recognised… When Jan Wilson (Greyhound Racing Victoria chairman) informed us, Robyn cried. In fact we both were in tears.”