Greyhound Racing New South Wales (GRNSW) have announced a return to metropolitan greyhound racing at Wentworth Park on 6th June 2020, but in a controversial move greyhounds trained in the greyhound heartlands of country NSW will not be allowed to race there.

GRNSW CEO Tony Mestrov has announced the merger of the Southern, Hunter and New England racing regions in to one large Metro/Southern, Hunter and New England region. This will enable greyhounds trained in this merged region to race at Wentworth Park, but greyhounds trained in the Riverina, Western Districts and Northern Rivers have been left out in the cold.

GRNSW CEO Tony Mestrov said, “This is the next phase of GRNSW’s plans to re-emerge to a more normal racing pattern, and a decision we have made in line with NSW Government’s restrictions and all health and safety advice.

“I thank participants for their understanding in difficult times for their compliance with the initial regional zoning plans that allowed us to continue racing under safe conditions during the COVID-19 pandemic.

“Working with GWIC, we are of course remaining vigilant on all health and safety measures to protect the wellbeing of participants and all communities.”

To alleviate the exclusion of country greyhounds from metro racing, GRNSW have planned to run Saturday City prizemoney equivalent races weekly at racing programmed at various regional venues in the Riverina, Western Districts and Northern Rivers zones. However while Wentworth Park will be running weekly, country participants have only been offered four metro prizemoney equivalent meetings in June; two meetings in the Northern Rivers, one in the Riverina and one in the Western Districts.

Mr Mestrov said he was pleased that racing has been scheduled to return to Wentworth Park on 6th June.

“The return to Wentworth Park has been something I know that has been eagerly awaited by participants,” he said.

“In this next phase, Wentworth Park will be available for all participants within the Metro/Southern, Hunter and New England regions.

“For participants in the two other zoned regions (Riverina/Western Districts and Northern Rivers) we have decided to schedule meetings at tracks within those respective regions that carry Saturday City prizemoney levels.” 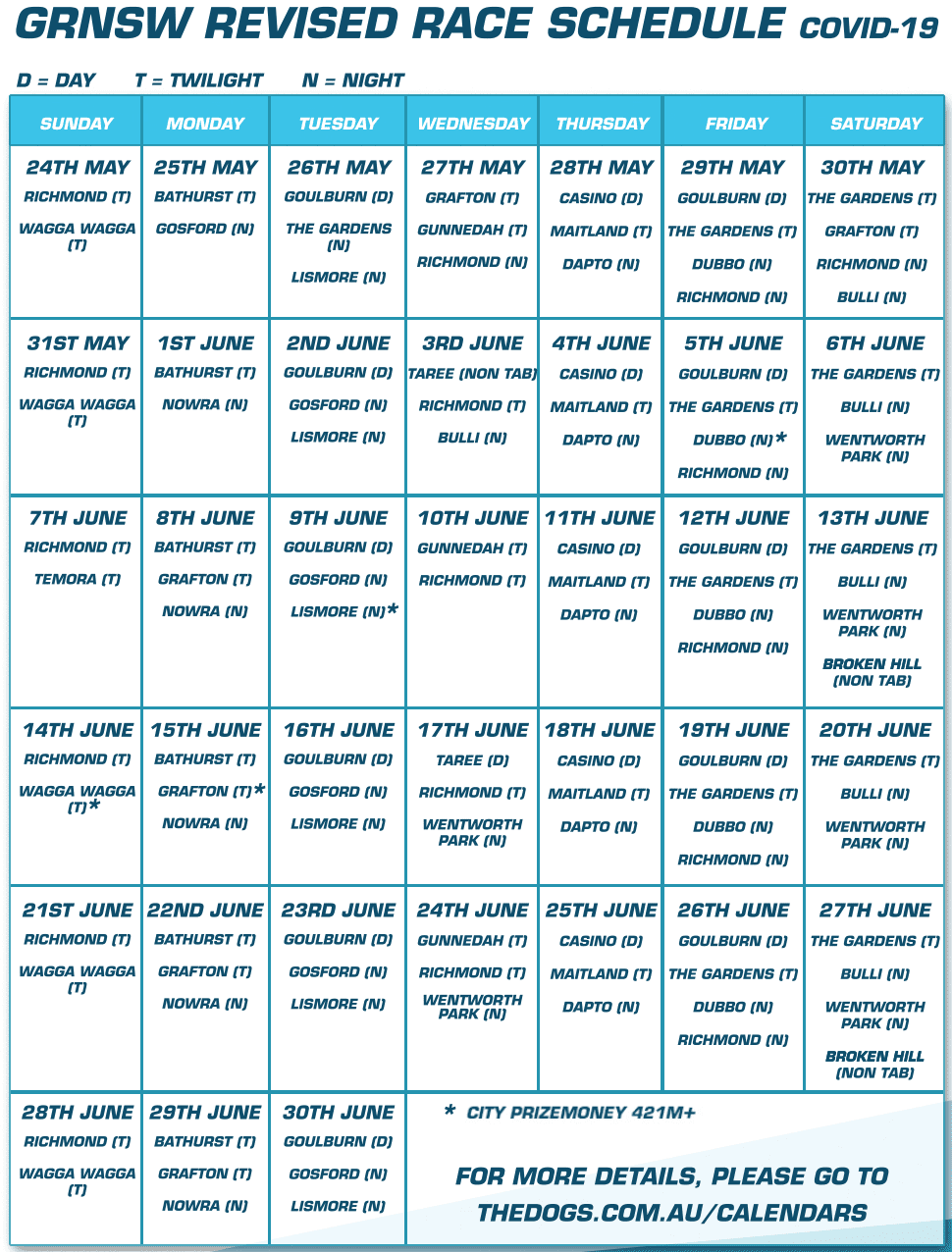