The 23-year-old (pictured with his father Gerald and Zipping Billy) will put the polish on talented youngster Zipping Quinsee, a winner of five of his 15 starts, which is set to jump from box three in the $25,000 feature.

The blue dog qualified for the final courtesy of a strong second placing behind powerhouse performer Dyna Keitaro on Tuesday, but it wasn’t all smooth sailing.

Jumping well from box eight, Zipping Quinsee put himself into a beautiful spot on the fence in his heat before the lure broke down approximately 150m after the start.

All greyhounds were then vetted and lined up for a second attempt at the race, with Lanigan relieved to have qualified for the feature after the ordeal.

“I really think he might have won the first race, he got to the fence where he loves to be and he was sitting third behind the leaders ready to go bang,” Lanigan told Australian Racing Greyhound.

“I was a little bit worried lining up for the second time because he was a bit puffed from the first run, but he came out alright and even though he got into trouble and had to race three wide the whole trip he was able to make it through to the final.

“We didn’t expect it to happen, but it was a good shock and a nice surprise.”

The son of Don’t Knocka Him and Tricky Gypsy will jump from box three in the decider on Sunday night, with Lanigan giving him a few quiet days after the hard run.

“He was pretty flat when we got home, but that’s to be expected because it is a six hour drive each way and he pretty much had two runs and it was the first 500 he has had in over two months.

“He is a lot better today. He has been sleeping inside with my mum on the couch, so he is being very spoilt and is being given every chance to recover from the trip.

“He is the only dog in the field having his second look at the track, so I am hoping he can improve off his heat run and if he can find a couple of lengths then we might be in with a chance.”

Although he is drawn on the inside of the speedy Fabregal (box four), Lanigan is hoping his star performer will be able to put himself into the final with a clean beginning.

“Box three is better than four, five, six seven or eight, the closer he is to the rails the better.

“The one and the two both want to get off the track a little bit, so I am hoping he can jump well and get a clear run into the bend.

“It’s only a short run into the first turn and they do tend to jam up a bit, so I am hoping he can stay out of trouble.

“If he is in the top four going down the back, I really think he could go close if he gets a clear run.

“At the end of the day, where he finishes doesn’t really matter, as long as he gets around safe and comes home alright – I am pretty proud of him as it is.”

A fourth generation greyhound trainer, Lanigan says he has always had a passion for greyhound racing.

“Mum always tells the story that I only learned how to count by counting the dog rugs at the races – which is probably the reason why I can’t count past 10,” he quipped.

“Greyhound racing is in my blood and it is something I have always loved.”

Having received advice from leading trainers such as Jason Thompson, Anthony Azzopardi, Jason Mackay and Marty Hallinan, Lanigan says he is very appreciative.

He is also extremely grateful for the support of his family who all play a massive part in his new found success. 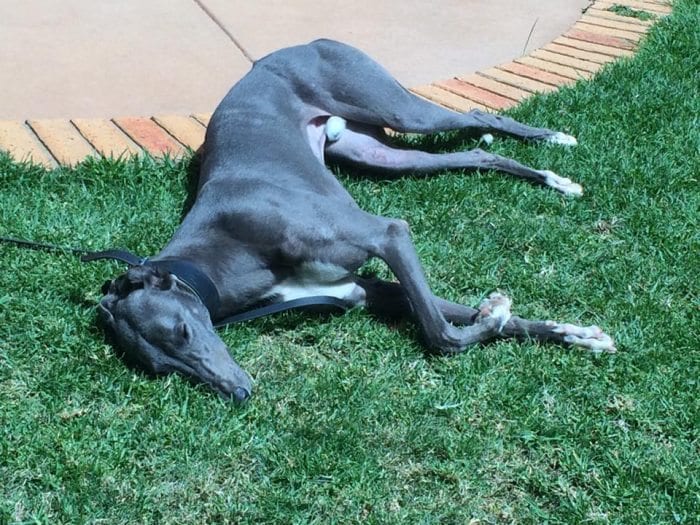 Zipping Quinsee relaxing following his second in a heat of the Gawler Cup.
“I am very fortunate to have a special team behind the scenes. My dad, who I have owned dogs with for five years, he is my best mate and he is very good with dogs, so it is special to be able to share this journey with him.

“When I was younger we lived at Gippsland and he won a couple of the trainer of the year titles – so he knows what to do and he is always giving me advice.

“My girlfriend Nicole is also a massive help. Nicole and I have been together for five years and back then she didn’t like dogs at all – she wasn’t an animal person whatsoever.

“Now she loves the dogs as much as I do and she is an enormous help. When I go racing she is always at home feeding the others and looking after them and she loves cheering them on.

“My mum Sue is very good as well and even Nicole’s family are there to help out – her little brother Ryan is 12 and he is absolutely mad about them – he knows everything there is to know about every dog at home.”

When asked what it would mean to win this week’s race, Lanigan was quick to respond.

“I think I would have a stroke or a heart attack – I get very nervous – but it would be absolutely unreal.

“I would love to do it for my dad, it has been quite a difficult 12 months for my family, so to win a race like this and to say we have won a group race would really mean a lot to both of us.

“The prize money would be nice too, but to be honest I don’t even really care about it, I just want to do it for my dad, he is my best mate, so it would be very special.”

The Group 3 Gawler Cup is race eight on the card this Sunday night and will jump at 8:57pm.

Should be a top night.