THIS week’s review of litters from the Victorian Litter Registrations for the week ending April 22 is one of 10 pups, registered by Merbein South breeder Jamie Quinlivian, by the highly rated stud prospect Banjo Boy (April 2011 Vee Man Vane x Off Springer).

She is from a litter of three named which included Railway Roger and Railway Ruby, with their dam having 12 other named offspring from three litters, whelped in July 2008 by Elite State, March 2009 by Where’s Pedro and February 2012 by Surf Lorian.

Rustic Reeba didn’t do all that much racing by today’s standards, with her 19 starts resulting in two wins and five placings, wins over 390m at Ballarat (23.12) and 400m at Mt Gambier (23.90) where she had her five placings.

She has one previous litter on file, whelping three dogs and five bitches in June 2014 by Cape Hawke, with all eight named, and all but the first named, Assaulted Pepper, not having raced yet, with the other seven winning, their names are Bear’s Gold, Bessie Belle, Jaxqui Blax, Moneter Foxy, Signal Peak, Silverband Falls and Sweet Savage. 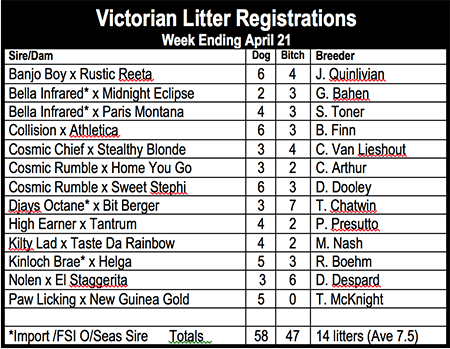 TWO litters on the list this week by the successful US sire Bella Infrared* (July 2009 Kiowa Mon Manny x Bella Ionic) who is currently 18th on the Victorian Metropolitan Sires list with four individual winners who have won 13 races, with 10 placings and five of the 13 wins registered at midweek or Sunday provincial stake meetings.

Worth noting though that his 13 wins have all come from the one litter, whelped in March 2014 from Fyna Bale (October 2009 Bartrim Bale x Amelia Bale) whose dam is by Sonic Flight* x Evonne Bale (Light Of Fire x Frosty Bale) and interesting to note that Frosty Bale is by the US sire By Tar* x Dior Bale).

Gone are the good old days when a top class dog on the track was retired to stud he would have a full book of 14 services every month, often for the whole first year which would give him 168 bitches, whereas last year’s most used sire in Victoria was Barcia Bale with 42, then in NSW Cosmic Rumble was the most used with 81 services.

There are many potential top sires who never get to achieve anything like their full potential at stud, with fewer litters being bred, in all states, and the easily accessed availability of frozen semen from almost any dog in the world you choose.

She is from a litter of five named which included Boddy Rox, Hot Grille, Sneaky Feet and Summer Wind, with their dam, Entrenched, producing winners from each of her three other litters, whelped in October 2004 by Bombastic Shiraz, February 2006 by Hallucinate and April 2007 by Surf Lorian.

She is from a litter which included Hewitson, Lavaliere, Mysterious Lola, Stunning Pedro and Where’s Bull, with their dam’s only other litter on file, has three named, whelped in July 2005 by Puzzle Prize.

NEXT we have a very well bred litter of 10 pups registered by Johnsonville breeder, Todd Chatwin, by the highly rated US bred sire Djays Octane* (December 2006 Flying Penske x One More Secret).

Bit Berger is from a litter of three named, which included Alice Shiraz and Yaranyacka, then their dam has winners on file from her two other litters, whelped in January 2009 by Big Daddy Cool and January 2010 by Meticulous.

She is from a litter of five named, which included Dodging Hooper, Cho Chang, Rookie Traveller and Tricky Lass, with their dam also producing winners from her other litters, whelped in October 2003 by Knockabout Wok, May 2004 by Token Prince, December 2006 by Malfoy and Octpber 2008 by Slater.

She has one previous litter on file, four dogs and three bitches, whelped in December 2013 with two named, Avatar Hope and Son Of Helga, both early winners, and it appears she missed in a mating to Farley Blitz*.

The three dogs and six bitches are from the well bred bitch, El Staggerita (December 2014 El Galo x Flossy) whose dam is by Primo Uno x Instructed First (Puzzle Prize x Decliro Park) and I would suggest with six bitches, these well bred youngster will get plenty of interest from prospective buyers, with future breeding in mind.

El Staggerita is from a litter of four named which included Pop Wright, Shanae Roae and To The Galo’ and their dam has four other named offspring on file, Jetta Can Run, Manilla Express, Money Come Back and Pepper Assault, who were whelped in March 2012 by Bekim Bale.

She is from a very successful litter which included Mario Chief, Stagger, Stagger Uno and Stomp Stomp, with their dam also producing winners from her four other litters on file, whelped in February 2007 by Primo Uno, January 2008 by Elgrando, September 2008 by Train A Journey, March 2010 by Velocette and October 2010 by Surgeon.

Flossy raced nine times for one win, over 460m ay Warragul (26.42) where she was also placed, and placed over 390m at Warrnambool and 410m at Horsham.

She has three previous litters on file, two listed in the previous review of her Nolen Litter, and she also has one bitch on file whelped in November 2014 by Melbourne Cup winner Dyna Tron.

From the mailbag – R.I.P Razldazl Pearl

IT is with a heavy heart and much sadness that we relay news from Ireland of the passing of the legendary brood bitch Razldazl Pearl* July 2004 Larkhill Jo x Lughill Rose) whose dam is by Brickfield Blaze x Crory Country (Manorville Major x Crory Flavour). 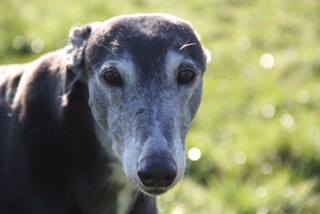 History shows that her progeny contested classic series with great success, and they won numerous championships including the Irish Derby, with Pearl producing five derby finalists and won the accolade of Irish Brood Bitch of the Year.

From the time she finished racing, Pearl was an ever present house guest, and enriched our lives so much that when she became a proud family member, Queen of our home, shared with three loyal companions who had so much respect for her. Her life was full of great moments, she was the leader, she communicated through her deep expressive eyes and whatever she demanded, she got.

She lorded it on the couch, when she entered the sitting room the other dogs quickly vacated her place, she had free reign, with Liam it was different, she had a unique special bond a mutual Gra, she loved sharing her couch with him. She always greeted him at the door, in truth she owned him, he was her servant, and they shared many trips and ice-creams together.

She threw champion after champion and as befitting a champion, she deserved everything she got in life, she enjoyed her retirement and a great time living life to the full, she had honorary membership at the Keadean Hotel where she chilled on their manicured lawns daring cats to appear. Many of you will be familiar with photos taken of Pearl on the Curragh, she loved her walks across the plains, as she did her trips to McDonalds and the time she spent at the tables, where she was given an exemption to run around the arena.

Pearl always got her way as was evident when we holidayed at Dunloe Castle, she got to stay in the hotel room overlooking the Gap of Dunloe.

Memories of you Pearl, with your soulmate (and servant Liam) – I will treasure forever, the void you leave, for us, will never be filled.

Let her epitaph record – She was bred to be special and special she was. Sleep well our queen, you will never be forgotten.

LISTED below are the AGRA breeding rankings for the four months to the end of April for both sires and brook brood bitches, with rankings determined by a points system applied to all Group races on a sliding scale from first to eighth.

STUD service figures for January 2016, released by GRV last week, show that Fernando Bale was the most popular sire with breeders for the month with seven services, followed by another recent retiree, Dyna Double One with five, Banjo Boy, Barcia Bale, Hostile, Magic Sprite and Bolen with three each, then Echelon, Fabregas, General Destini, Jagger Swagger, Kinloch Brae*, My Bro Fabio, Paradise Madison*, Premier Boloney, Stagger and Vee Man Vane, with two each completing the list of sires with multiple registrations for the month.

Bred to win – Dogs to watch

WITH HELD (Black Dog June 2014 Bekim Bale x Velocity Cloud) Fifth at first two starts, both over 520m at Ipswich beaten around the six length mark in both in average 31.80 times. Had box one at first Victorian start at Sandown (SAP) on Sunday May 15, beaten five lengths in actual time 30.45. Will improve when he settles in here and with more experience.

JOHNNY BRAVO (Black Dog El Grand Senor x Sunset Sky) Having his 13th start at Sandown, (SAP) on Sunday May15 when third, from box three, beaten by 5.49 lengths in the race won by Smokester, who ran 29.72. Prior to Sandown he had been second there the previous week, 2.5 lengths behind Jay Tee Pee, after winning by fourteen lengths in 27.41 BOD quail over Lord Somersby on May 2. About to get closer to his peak and will be very hard to beat next start.

NEXT week we can resume NSW litter reviews, which actually arrived just as I was finishing this week’s column, and we will also have the NSW Stud Service figures for January, and anything from the mailbag.