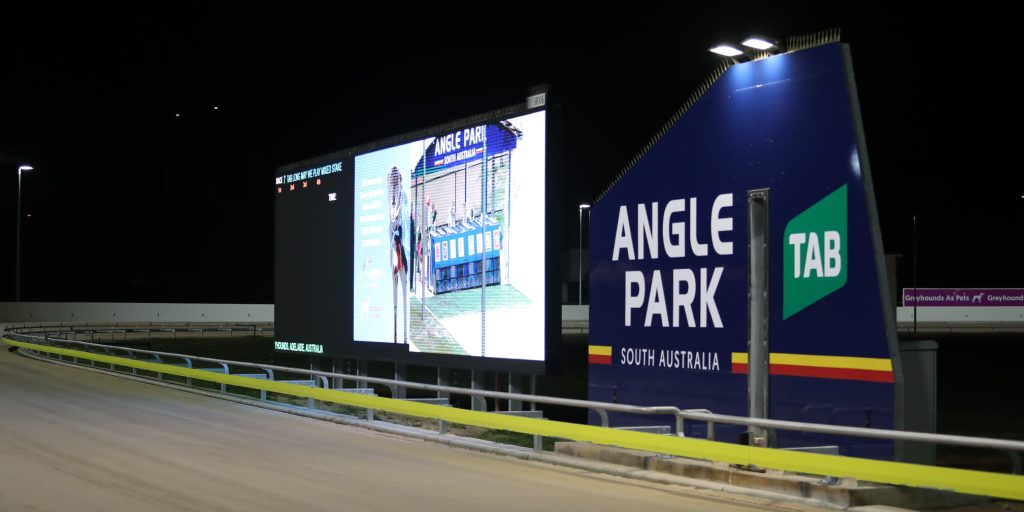 In front of a handy crowd at Angle Park Thursday night Victa Grosso for trainer Tony Rasmussen landed another feature race win when he won the Shane McQueen Feature final in good fashion.

The son of Fernando Bale and Victa Victoria has been a model of consistency in feature events and added last nights premier middle distance victory to his 2021 Group 3 Gawler Cup win back in October last year.

After winning his heat last week he was sent out a strong second favourite behind interstate raider Starlight Tyson for Janet Cottrell with another interstate visitor, Spanish Miss for Diane Ireland on the third line of betting with Spring Harbour for Ben Rawlings.

As the start was affected most thought Starlight Tyson would show sufficient speed to cross to the lead form box four however he showed terrific speed but so did Victa Grosso who drove hard from box 2 to hold out Starlight Tyson in the drive to the winning post of the first occasion.

The two market leaders already opened up a gap to the chasing pack with Spring Harbour, Danyo’s Mercy for Lauren Harris and Spanish Miss challenging for third spot.

Into the back straight and Starlight Tyson had a slight advantage however Victa Grosso continued to drive hard to his inside and shortly after assumed control of the lead.

Spring Harbour was holding third with Spanish Miss getting to the inside and making good ground with the remainder of the field too far back to challenge for the placings.

Off the back straight and in a twinkling of the eye Victa Grosso accelerated away and opened up a two length break from Starlight Tyson who was doing his best to hang on to the leader while Spring Harbour and Spanish Miss were battling out third spot.

Into the front straight and Victa Grosso had taken full control of the event and raced away for a four length win in a blistering 34.06 for the 595m journey from Starlight Tyson who just held second in front of a late finishing burst from Spanish Miss.

“He’s a very handy dog and he never gives up,” Rasmussen said.

“He just keeps on chasing. He is the star of the kennel at the moment. He finally drew the rail where he wanted to be.”

Victa Grosso is owned by the My Four Girls syndicate managed by Susan Schadow and has now won 22 races with 26 placings from 59 starts with career prizemoney around $120,000.

The race is named in honour of ex GRSA CEO Shane McQueen who was a greyhound administrator in WA and SA until his untimely passing in 2003.

Shane McQueen was and still is a popular name in greyhound racing and Rasmussen paid tribute to the man.

“Shane McQUeen was a man that we all respected and he did a lot for our industry,” he said.

Another SA highlight of the night was another win to the Ossie Chegia trained, Fantastic Radley over the 730m.

Paying $1.30 with online bookmakers, he started brilliantly again to get the win by three lengths to the Rasmussen trained Victa Haydn.

The son of Fernando Bale x Fantastic Dotty has now won 25 timesover 42 starts and massed up $99,000 in prizemoney.