BARKING Bad will be aimed at the heats of the Group 1 Paws of Thunder (520m) at Wentworth Park on January 14 after scoring a sensational victory in Tuesday’s Group 2 Gosford Gold Cup (515m).

Starting from box seven in the $40,000 feature, Barking Bad got a clear run to the first turn on the outside of pacemaker Knight Sprite (box six) before unleashing a powerful finishing burst to score by one-and-one-quarter lengths in 29.35.

Race favourite Ando’s Mac (box one), which won last year’s Group 1 Melbourne Cup, was far from disgraced in third, three-and-one-quarter-lengths off the winner.

Michael Eberand, who trains Barking Bad for first-time owner Brad Crawford, was elated with the victory, his first group win in more than two decades of training.

“I knew that he could run the times to win the race, but being able to run the times and getting luck in running to be able to do it are two different things,” Eberand said.

“He was a bit tardy away, but he has got tremendous pace and he just got a real nice run on the outside of Knight Sprite.

“Ando’s [Mac] didn’t come out as brilliantly as he can so my bloke was able to get a nice sit on the outside of the leader down the back.

“Once he got into that position I knew he was a chance because he has got a really big motor.”

An interesting fact about the victory was that Barking Bad achieved the feat wearing blinkers, a rarity in greyhound racing. Eberand believes his greyhound benefited from a series of ‘finish on’ trials at the track six months ago.

“He is probably the only dog to have won a group race wearing blinkers – he can lose concentration which is why we use them,” Eberand explained.

“Gosford trialled the use of the hoop arm and follow on trials throughout last year and he had three weeks in a row of follow on lure trials during that period.

“He is a pretty smart dog and I think he remembered where he was – it gave him a confidence boost in order to put his best foot forward.” 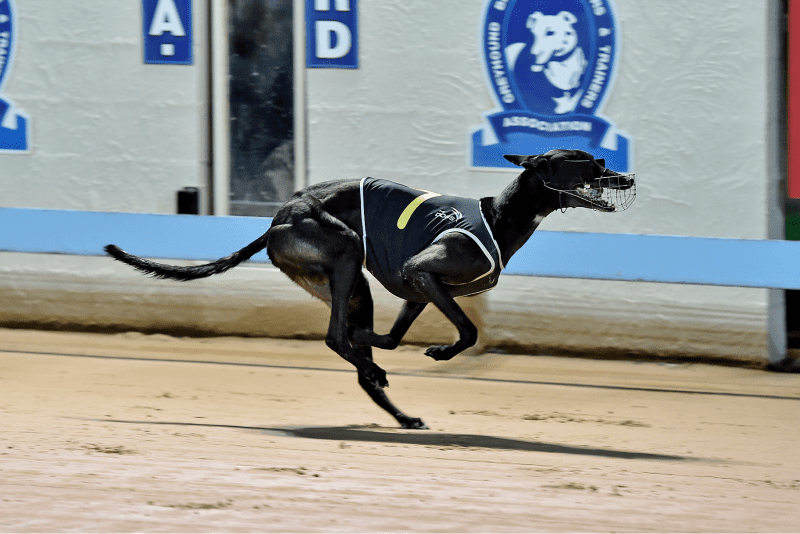 Barking Bad strides clear to win the Gosford Cup in blinkers.
A son of Bella Infrared and Ebby Miss, Barking Bad has now won 14 of his 40 starts, with an additional 16 minor placings.

Tuesday’s win was the highlight of Eberand’s training career and was extra special given he bred Barking Bad.

“I have been in and out of the dogs for 25 years and about seven years ago my son Brad remembered the dogs from when he was smaller and wanted to get a greyhound.

“We went and looked at a litter and there was only one pup left – I was going to leave her there, but he insisted that we get her so we took her home and she grew up to be Ebby Miss.

“We raced her throughout her career and she was a very nice stayer – she made the final of the Sandown Cup and Summer Cup and ran second in the Sydney Cup.

“It is a massive thrill to have her produce pups which are just as good as her and which are able to go one better.

“It is an amazing buzz because we whelped him, reared him and have done everything with him – he is part of the family.”

Barking Bad will now be aimed at the Paws of Thunder, with the plan being to keep him fresh heading into the series.

“He tends to race better while he is fresh – he went into the [Gosford Cup] series with three or four weeks off with no trialling.

“We’ll focus on the major races with him whilst trying to keep him fresh – he’ll have 10 days off and then go into the heats of the Paws of Thunder.

“After that we’ll probably have a look at something like the Bulli Cup – he made the final of that race last year.

“At this stage I think we will just focus on races in NSW – I think he is a dog which likes to be at home – we have sent him interstate twice before with mixed success and he doesn’t travel overly well.”