Bold Trease has tonight been announced as one of the inaugural 36 inductees in to the Victorian Greyhound Racing Hall Of Fame.

When Warrnambool trainer Norm McCullagh was educating [breaking-in] a greyhound called ‘Roy’ in the winter months of 1985, he had no idea that this pup was about to take him on the ride of his life.

“Roy didn’t break-in too flash. I thought I might eventually win a race or two with him so I spelled
and then put him back into work a few weeks later”, McCullagh revealed.

To say that Roy improved in the ensuing months would be a massive understatement, and McCullagh recently spoke about the pup’s first race start when he lined up in a sprint race at Warrnambool as Bold Trease.

McCullagh resisted temptation and refused to sell Bold Trease, who went on to win eight feature races including achieving the unthinkable, capturing Australia’s premier distance event, the Group 1 Sandown Cup, an incredible four years in a row from 1986-‘89. 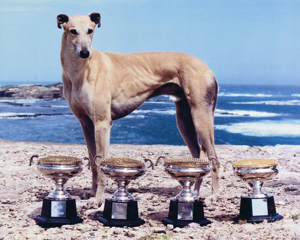 Two years of racing is considered a lengthy career these days and perhaps three years was back then, but winning any race four years in succession let alone an event of such prestige is probably the greatest feat any greyhound has ever accomplished.

“Roy had a pretty big motor and a great will to win. He would just keep going and would have run 1000 metres if I had let him. And he was so consistent being unplaced only 12 times in 104 starts”, McCullagh said.

While racing at the top level for such a long period, Bold Trease came across some quality stayers and, as such, rivalries were forged.

“His greatest rivals were High Intensity and Pharaoh’s Mask. But stayers of that calibre would come and go and Bold Trease sometimes had to go six weeks without a run because there weren’t enough people willing to race their dogs against him”, McCullagh said.

A lack of racing made it difficult for McCullagh to maintain Bold Trease’s fitness levels, and he was feeling pressure from the legions of fans who had built such high expectations of the greyhound that race caller Ron Hawkswell had dubbed “The Warrnambool Warrior”.

“There was a bit of pressure trying to get him up all the time”, Norm admitted. “The whole town of Warrnambool was behind him including the local council, and he would draw huge crowds to the races. He’d sometimes have up to 20 people queuing up to get a glimpse of him when we arrived at the races for kennelling. He was a real icon.”

Bold Trease’s fan base spread not only beyond Warrnambool, but right across the country.

“He brought so many people through the turnstiles in Tasmania that the crowd spilled on to the racetrack when he broke the track record in the Launceston Cup. He had fans all over Australia and I still get a Christmas card each year from a family in Adelaide who followed his career”, McCullagh said with a smile.

However, he did endure his share of injuries during his five year career.

“He broke his hock twice and missed a total of eight months of racing. The first break occurred after 12 straight wins. Then he won 11 races in a row and broke it again”, McCullagh said.

A son of Roy Trease and Irish Temptress, Bold Trease was bred by Ned and Maureen Bryant and sold to McCullagh and a group of his mates as a young pup.

Bold Trease’s legacy is still a part of the Warrnambool Greyhound Racing Club, as evidenced by the club naming its bar the ‘Bold Trease Bar’.

As for McCullagh, he is still a successful greyhound trainer and each year he brings a new batch of pups through the ranks in the hope of unearthing another champion. But as for finding another greyhound that could win four Sandown Cups, even Norm would agree that such a feat will never be emulated.