For the past eighteen months Victorian Country Cups have been dominated by the magnificent sprinting trio Paw Licking, Ronan Izmir and Black Magic Opal however with two retired and the other on the sidelines the time is right for an emerging star to step up to the next level and the TAB Bendigo Cup to be run next Friday night may just produce that runner.

After mixed fortunes for some of the fancied pre post runners in the heats an intriguing final has been compiled for the 425m event worth $45,000 to the winner.

One of Victoria’s most promising up and coming sprinters Luca Neveelk could not have been more impressive in a determined heat win clocking a slick 23.87 however he must contend with an awkward box four draw in the final if he is to claim his first black type trophy.

Luca Neveelk’s victory took his record to twelve wins from just thirteen career starts and he could not have been more impressive after having to work hard in the early stages to gain clear galloping room before proving far too strong for the smart Universal Size in the run to the line.

The fastest heat time was recorded in the eighth and final heat when Zipping Snoopy uncharacteristically exploded out of the boxes and clocked slick sections en route to an effortless 23.68 victory and like Luca Neveelk he will carry the same rug in the final as he did in the heat – the white.

Coincidentally four of the eight finalists will line up in the final carrying the identical rug colour to their heats after Warrior King and Senor Socks drew seven and eight respectively in both heats and final.

Warrior King proved too strong for the free rolling Matt’s Entity and Top Secret over the concluding stages of his heat when he clocked 23.84 while Senor Socks looks ideally drawn out wide after using the eight alley to perfection registering 24.06 in his run off.

Senor Socks is one of two finalists for trainer Robert Britton who will rug up the “wing” runners with Pippa Shiraz, a 24.07 heat winner drawing nicely in box one.

Bendigo track specialist Flying Bolt showed a glimpse of his old form when running down the highly talented and odds on favourite Harry Keeping in 23.92 and he will start from box two in the final.

Recent Wagga Cup winner White Spyro never gave his more fancied opposition a chance when he flew the lids and ran away with a 23.78 heat win from box eight however he moves to box five for the final and Elite Devil moves from the suitable inside draw of box two where he saluted in 23.85 to a tough box six draw.

The Group 2 TAB Bendigo Cup final will be race seven on Friday night at 9.10pm and will highlight a card of racing that includes the $10,000 to the winner 3BO FM 93.5 Winter Cup final over 660m, the GRV VBIS Maiden Series final over 425m ($7,500 to the winner) and the Bendigo Advertiser Super GOBIS final over 500m. 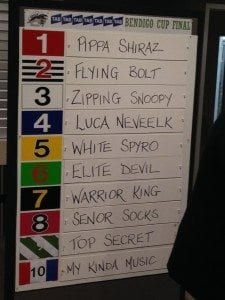