It’s that time of year again when the annual Group Racing Calender is released by the Australian Greyhound Racing Association. As expected, Victoria has taken top honours with an astonishing fifteen of their Group races receiving prizemoney boosts. New South Wales came in second with two and both South Australia and Queensland received one increase each. Unfortunately for Western Australia they didn’t receive a single prizemoney increase to any of their Group races which should come as a disappointment for their array of talented trainers.

Victorian participants will be ecstatic with the changes to their Group racing schedule with several increases across the board for their Group Two races. This also includes the introduction of a trio of Group Three races each worth $15,000 to be run and won at Sandown Park throughout the year.

New South Wales prizemoney levels have been a topic of hot discussion over the past year with the Dapto club positively responding by elevating their invitational Megastar race to an enormous $75,000 first prize and therefore gaining Group One status. Despite the Group Two Richmond Derby suffering a $5,000 downfall, this was added to the recently run Group Two Richmond Oaks, boosting previous years winners cheques to a healthy $20,000.

GBOTA revolutionised their annual main event, the Golden Easter Egg series by introducing two new races; the Group Three Ultra Sense and Group Three New Sensation that brought in specific terms of how many starts a greyhound has had, to give those inexperienced youngsters a chance to build a foundation towards the following years Group One Easter Egg final.

Unfortunately for South Australian participants, the biggest disappointment of the 2013-14 calendar was the drop in prizemoney for the Group Three SA Sprint Championship by $10,000 and with no Group race increases, gives little faith to the States owners and trainers.

The National Championships for both sprint and distance will be held at The Meadows during August year, with what could be said as the leading Australian state in greyhound racing, guaranteed to put on a memorable show as qualifiers will travel from all over Australia to fight for the $75,000 first prize on offer. 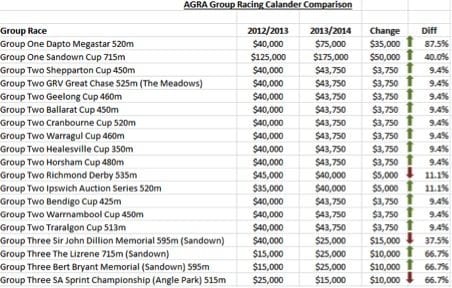