DESPITE having a background in thoroughbred racing, journalist Michael McGill recently found himself immersed in the world of greyhound racing when making the decision to adopt a new family pet.

McGill and his wife Loretta as well as his sons Reyes, 9 , and Harry, 6 , wanted a dog which would fit in perfectly with their family, with one of McGill’s racing industry connections putting him onto the idea of a retired chaser.

“I know a lot of people in the greyhound industry, in particular jockey Brenton Avdulla, who has owned a lot of very good greyhounds,” McGill told Australian Racing Greyhound.

“He is always putting on Facebook that once they retire his greyhounds go to GAP NSW so I looked into greyhounds as pets a bit more and I found out that they don’t bark much, they don’t moult, they don’t get smelly like a normal dog and they are pretty much just lounge lizards which was perfect for what my family wanted.”

Once the choice was made to give a retired greyhound a chance at a loving family home, the McGill family started pouring over the GAP NSW website in the hopes of finding the right dog.

“We went through the GAP website and we knew we wanted a female and we narrowed it down to three particular dogs and by reading our sons the bio on each dog and by showing them the pictures we all agreed on a dog named Tia,” McGill explained.

“When we went to the adoption facility at Wyee the lady who was running it told us she had picked out a couple of dogs but that there was one in particular she thought would be perfect – as fate would have it she had picked out Tia as well.

“Her name on the track was Special Two and she had 17 starts for two seconds, two thirds and two fourths – her career highlight was running second at 40-1 at The Gardens.” 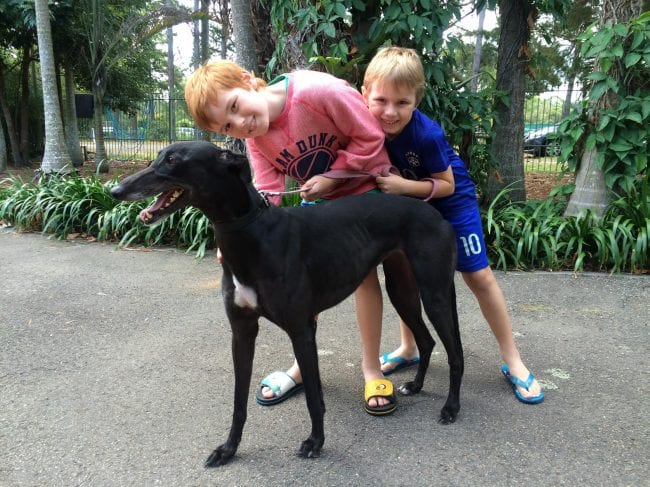 Tia shares some cuddles with Reyes, 9 , and Harry, 6.
Tia joined the McGill family just over two months ago. Despite having a lacklustre career on the racetrack, McGill says she has made a superstar pet.

“Having two young boys, the family has a pretty structured routine but Tia has slipped right into it.

“She is great with kids – one of my sons had his birthday party here last weekend and she was in the back yard with them – she got excited and wagged her tail at first but she soon went and laid down on the porch and didn’t bat an eyelid.

“My youngest son Harry is six and he has a special bond with her already – she follows him down stairs at 6am every morning and feeds her and lets her outside.

“All he has to do is touch the little ring on her collar and she just follows him – she loves the attention.”

And McGill says Tia is adapting to normal sights and sounds outside of the house too, with the black greyhound recently making a new canine companion.

“My sister in law lives two streets away and she has a Boxer x Alsatian and they met each other at the park a couple of times and got along really well – now she goes over to her house once a week for a play date and Tia loves it.

“Little dogs still worry her a bit because they go underneath her legs which she doesn’t like, but now when we go to the park she sees the other dogs running around and it doesn’t bother her.”

Overall, McGill said it was a fantastic decision to adopt Tia, with the daughter of Cosmic Rumble and Quick Mint now much more than just a pet to the entire family.

“We love her so much that my wife and I are forced to share a two seater so she can sit on the three seater.

“She will be fast asleep and all of a sudden her little feet will start running – almost like she is dreaming of when she used to race.

“She has been the perfect addition to our family and now every chance I get I am telling people how great they are as pets – all my friends know and even my neighbour has said he will get a greyhound – it’s amazing.”

NO WAY ITS ME