The New South Wales based trainer, who is a welfare officer with the Greyhound Breeders, Owners and Trainers Association, misses the characters of the day.

“I grew up with some of the characters in Sydney and you don’t see them today,” Colless told Australian Racing Greyhound.

“They looked after their greyhounds, they did things with their dogs that they don’t do today, you don’t rub the dogs down and massage ’em and brush ’em these days.

“Back then, they always looked a picture.

“There was the old saying: you always picked the old bloke with the hat.

“You always backed his dog, any old bloke with a hat who walked onto the track with a dog that looked the picture, you backed his dog.

“They need to make changes, I know that, but what changes they’ll make is another thing,” Colless said.

“I’ve read about the inquiry. At least the government is taking a look.”

Mr Colless said issues with grading and lack of prize money had hurt the industry in New South Wales, forcing many trainers to send their dogs south.

“I used to do a bit of grading in the non TAB stuff and I thought that was pretty fair, but I think it’s a personal thing.

“I think now they just sort of set the guidelines, put it through a computer and forget it, but equal opportunity is what you are after.”

“We just want to improve our sport and get better prize money,” he said.

“I think Victoria, they’re going (ahead) in leaps and bounds. They get a lot of money from the government.

“And now we’re trying to get the government up here to do the same thing. They take so much out of the dollar and they take too much out.

“Vic dogs get a better deal than we do.

“Lots of our guys (New South Wales trainers) send their dogs down there because there’s more prize money.

“No wonder we’ve got a shortage up here.

“I remember when all the dogs used to come up from Victoria to Wentworth Park, you’d back the Victorians. And I can’t answer that one now, because they never come here.”

You could sit and listen to Colless talk for hours.

His aging voice tells tales of yesteryear, like they happened yesterday.

“I’m glad I got introduced to it (greyhound racing) by accident,” he remembers.

“I met a lady – who I later married – and my father in law got me interested in dogs.

“I’ve had no disappointments whatsoever.

“It’s all money now, there’s too much greed today.

The most dogs he’s ever had under his care is four.

He now has “just the two”, as arthritis in his hands makes it tougher to look after the dogs, and he does all his own vet work on his animals, picking up the tools of the trade over the past four decades.

“I learnt the hard way from old trainers and I still believe in it,” he said.

“I’ve only got two. You can’t spend the time with them if you have any more.

“I can’t understand blokes with 20 dogs.

“They just don’t have the time to do it right.”

Snow Shiraz is his darling at the moment, with two wins at Wentworth Park and a recent second at Gosford.

“He’s a very honest dog and he’ll make a bloody good pet when he eventually retires,” he said.

“I’ve had a hell of a lot of winners, I can’t complain.

“I’m not making a million, but I’ve got a little bit of money put away.” 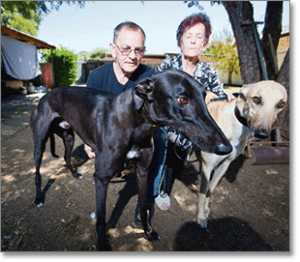 Next time you’re at the track, and you see the old fella with the hat, with a dog that looks a million bucks, it’ll probably be Barry, ready to send his next winner home.

More details have emerged about the review into the NSW Greyhound Racing Act, 2009.

A spokesman for the New South Wales Office of Liquor, Gaming and Racing said the move was a five year statutory review.

Under the legislation, the Minister for Racing is required to review the Greyhound Racing Act to:

The spokesman told Australian Racing Greyhound the reviews and any recommendations would be tabled in the NSW Parliament by May, next year.

The spokesman said the OLGR had produced a discussion paper to help people make submissions on the review.

We previously reported it was available on the OLGR website, but it is set to be published in the near future.

“The discussion paper poses questions about matters of specific interest, however comments or suggestions may be made on any aspect of the industry,” the spokesman said.

“Advertisements seeking suggestions to improve greyhound racing are also scheduled to be placed in the media to widen the recruitment of ideas.

“OLGR invites individuals and organisations interested in the review to make submissions.