On the track he raced 69 times for the outstanding record of 31 wins and 22 placings which earned connections more than $357,000 in stakes, with his major wins being the Group 2 Gosford Cup and Group 2 Harrison-Dawson at Sandown, with two placings at group 1 level in the Temlee and Topgun.

He was also a finalist in the Melbourne Cup, Albion Park Winter Cup and Geelong Cup, and proved his brilliance and versatility with a career win average of 44.5% and overall placings average of 76.8% which is not achieved by many greyhounds.

She is from a litter of four named, which included, City Of Angels, Off The Canvas and Smashville, with their dam also producing winners from each of her three other litters, whelped in December 2009 by Knocka Norris, May 2011 by Western Land and March 2013 by College Causeway*. 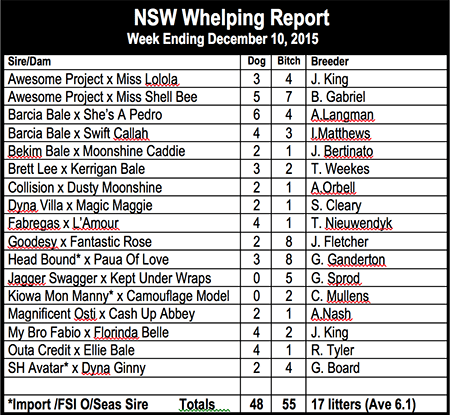 She is a proven producer with good winners from her first two litters, whelped in July 2012 by Dyna Lachlan, then February 2014 by Swift Fancy and she has a litter of two dogs and five bitches on file by Barcia Bale, whelped in October 2014.

Miss Shell Bee is from a litter which included Blackout Shelby, Darby Day, Hallux, Jaypee Shelby, Mouldy, Opalised Shelby, Paper Man, Royal Strike and She Knocks, with their dam, Ima Shelby producing winners from each of her three other litters, whelped in March 2010 by El Galo, September 2011 by Where’s Pedro and October 2013 by Magic Sprite.

She has two previous litters on file, with handy winners from the first litter, whelped in October 2013 by Fabregas, with five named, Londonderry Lass, Ma Cushla, Moonwalker, Nite Dragon and Sharp Shooter, which was followed by a litter of one dog and four bitches, whelped in June 2014 by Spring Gun.

This really is a beautifully bred litter and with seven bitches I would suggest there will be plenty of interest from prospective buyers with future breeding in mind, who should also take into account Miss Shell Bee’s wins over 600m at Gosford.

She is from a litter which included, Big Wave, Complicit, Corby, Glamma, Group Lodge, My Girl Cookie, Satin Surf and Snoopy Collins, with their dam also producing winners from her other litters, whelped in July 2010 by Knocka Norris, August 2011 by Lochinvar Marlow and September 2012 by Premier Fantasy*, then she has one named from her April 2013 litter by Collision.

Her breeding career has got off to a very good start with her 12 named offspring from two litters all winning races, starting with her November 2012 litter by Fabregas, which produced, Fabulous Boy, Just Fab, Kiddie Cuts, Opus Forte, Upney Lane, and Wuxi, which was followed by a July 2013 litter by Magic Sprite, which produced, Allgaier, Biffle, Defaulter, Fraudulent, Miss Eldora and Remember Irene.

NEXT we have a lovely litter of 10 pups, registered by Appin breeder, Jason Fletcher, by Goodesy (November 2007 Collision x Frosty Fruits) which should attract plenty of attention from potential buyers with future breeding in mind.

Going to the fourth line of the pedigree of Fantastic Rose, you will find Brett Lee, Elusive Rebel, Malawi’s Prince, Playground, Light Of Fire, Magic Riddle, Elle’s Commando and Gotta Return, which combined with the excellent pedigree and stud record of Spiral Nikita* and you can see the potential in the pedigree of this litter for future breeding.

Fantastic Rose is from a 100% winning litter which included Fantastic Blaze, Fantastic Mick, Fantastic Nikita, Fantastic Pete, Fantastic Sid and the prolific winner Fantastic Spiral, with their dam, Light Fantastic also producing winners from her two other litters, whelped in September 2013 by Goodesy and April 2014 by Swift Fancy, so the line through Goodesy’s pedigree has already been proven.

On the track, Fantastic Rose raced five times for one win and two placings, winning over 457m at Goulburn (26.24) with placings over 520m and 600m at Dapto.

She has one previous litter on file, consisting of five dogs and one bitch, whelped in January 2015 by Barcia Bale, so she certainly has some well bred pups on the ground to boost her record as a brood bitch.

This is another litter that should create plenty of interest amongst potential buyers with future breeding in mind, with the three dogs and eight bitches, from the beautifully bred, lightly raced, proven producer, Paua Of Love (May 2009 Bombastic Shiraz x Paua To Burn) whose dam is by Awesome Assassin x Alice Dooley (Barrantes x Impish Dancer) and worth recalling, Alice Dooley’s sire Barrantes is by Curryhill Brute* x Bush Ballad (Brother Fox x Drop Of Wine).

Paua Of Love is from a very good litter which included, Bangkok Ritza, Paua Of Darkness, Paua To Rock, Pyro Girl, Queen Debello, Ritza Debbie and Unrelenting, with their dam also producing winners from a second Bombastic Shiraz litter, and three others, by Brett Lee, Spiral Nikita* and Velocette.

She has been an instant success as a brood bitch, with her first litter, whelped in May 2013 by Brett Lee, producing Black Bear Lee, Black Bordeaux, Body And Soul, File The Writ, Luxury Liner, Martial Law and Power For Lee, then she has five named from her April 2014 litter by the under-rated stud prospect, Zulu Zeus which are just starting to race now.

OUR final litter for review from the NSW list this week, is one of five bitches, by highly rated stud prospect, Jagger Swagger (December 2010 Premier Fantasy* x Surpassing).

Registered by St. Marys breeder, Greg Sprod, these well bred young ladies are from the beautifully bred, lightly raced bitch, Kept Under Wraps (February 2013 Fabregas x Lily Eve) whose dam is by Molotov* x Elite Monelli (Elite State x Elusive Rebel) and as far as I can recall this is the first litter from a daughter of the outstanding young sire Fabregas, who is must be remembered, will only be six years old in October.

She is from a litter which included, Magic Carpet, Parmi Parma, Simultaneous and Tarma Lass, with their dam, Lily Eve also producing winners from both of her other litters on file, whelped in April 2011 by Brett Lee and November 2011 by the US sire Lonesome Cry*.

TURNING our attention to the Victorian Litter Registrations list for the week ending March 16, our first litter review is one of eight pups by 2010 Group 1 Silver Chief winner Enry Walt (January 2008 Primo Uno x Awesome Saint) who is now eight years old and to my surprise, when I checked the data base, has only 80 named offspring.

She is from a litter which included, Derrell’s Diva and Tiger Martin, with their dam having winners on file from her two other litters, whelped in June 2006 by Texas Gold and March 2008 by Droopys Puzzle.

She is already a proven producer, with winners from her first litter, whelped in April 2012 by Velocette, which produced, Black Tilly, Brindle Mist, McNutso, McThumpa and Where’s Wallace.

The pedigree of this litter is probably better than it first looks, with Primo Uno being an under-rated sire, and Enry Walt not having been given much of a chance to prove himself, then there is plenty of depth on the dam side through another under-rated sire, Moonambel Prince (Fox Hunt x New Bow) and of course, Black Shiraz (Ginger x Dark Horizon) sire of Rainyjane Oscar’s dam Civil Action, and also her dam Civic Way (Walkabout Sid x Civic Lee).

She is from a litter which included Busy Pedro, Fib A Lot, Path To Plenty, Pedro’s Busy, Pedromatic and Where’s Bizzy, with their dam also having winners on file from her other litters, whelped in October 2008 by Brett Lee, September 2011 by Dyna Lachlan and August 2012 by Collision.

Spud Regis won the 2013 Group 1 Adelaide Cup and Group 1 Australian Cup, along with wins in the South Australian Derby and The Ambrosoli, at Wentworth Park.

She has one previous litter on file, with one dog and one bitch, whelped in March 2015 by Collision, so she has done much better this time and I would think this litter will attract plenty of attention if any of them are advertised for sale.

Cranbourne breeder, Connie Sofra has the other My Bro Fabio litter, which unfortunately is low on numbers with just the one dog and bitch, from the beautifully bred, unraced bitch, Pretty Larkhill (November 2006 Larkhill Jo* x Pretty Portrait) whose dam is by Black Shiraz x Prima Portrait (Moral Standards* x Polly’s Portrait).

Paddy Whacker’s sire, Heart Rumble, is by Smooth Rumble (Ginger x Follow Through) from Beaming Heart (Spiral Nikita* x Slippy Heart) so there is plenty to like about his pedigree from the Australian perspective.

She is from a litter which included Cosmic Zeus, Foot Bolt, Niagra Mist and Supreme Token, with their dam, Kilby Supreme producing winners from her other litters whelped in February 2007 by Big Daddy Cool, October 2007 by Surf Lorian, and February 2009 by Where’s Pedro, which produced Don Chendo, Kilby Wish, Out There Pedro, Pedro Sanchez and Rind Supreme.

She has winners on file from her first two litters, whelped in November 2011 by Big Daddy Cool and February 2013 by Bekim Bale, then has a litter of two dogs and two bitches, whelped in July 2014 by Bookkeeper, which shouldn’t be far off racing. 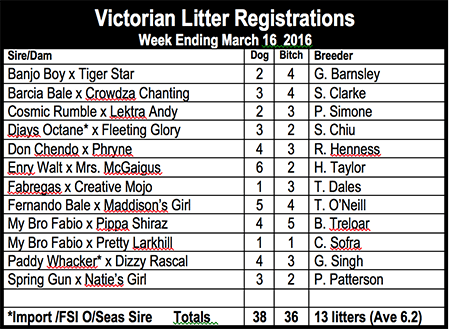 OUTSTANDING young sire Barcia Bale increased his lead on the Victorian Metropolitan Sires list at the end of March after his offspring won 20 races on Melbourne’s two city tracks during March.

Barcia Bale now heads the list with 64 wins after three months, followed by Cosmic Rumble with 46 wins, Magic Sprite 37 wins, Kinloch Brae* with 35 wins and Fabregas, up five placed from tenth to fifth, with 32 wins.

Looking at the top five after deducting Sunday and Midweek provincial stake meetings, the top five are Barcia Bale with 37 wins, Magic Sprite 26 wins, Cosmic Rumble with 25 wins, Turanza Bale with 22 wins and Fabregas with 20 wins.

Just outside the top 20 at the end of March with seven wins each were, Lochinvar Marlow, Swift Fancy and Razldazl George*, then on six wins each, Dyna Steal, Djays Octane*, Razldazl Jayfkay and Nolen, then on five wins each, Kilty Lad, Oaks Road, and David Bale.

Winners for the top three March sires and their dams, on Melbourne’s two city tracks were as follows:

BELLE DEITY (June 2014 Black Bitch, Collision x Miss Bel Air). Owned by the Showmah syndicate and trainer at Langwarrin by Lyn Smith, this well bred youngster impressed with a first up third from box one at Sandown on April 9 behind the far more experienced Pee Cripps who won by 7.5 lengths. Needs more experience and will be better for the run.

VICTOR METTI (April 2014 Fawn Dog, Djays Octane* x Giacometti) owned by G. Collins and trained by Ray Henness at Heathcote, he ran on nicely when stepping up to 595m at his second race start when beaten 3.25 lengths in the race won by the improving Dundee Calypso who stopped the closck at 34.44. Previously fourth from box four over 515m, beaten 6.5 lengths in the race won by Unapologetic who ran 29.74. Greyhounds by overseas bred sires often take a little longer to mature than our locally bred stock, so I am sure this one won’t take much longer to reach the winner’s list.

We’re in the money

We also had Lilly Of Laguna in the same race, who didn’t have any luck, contacting the running rail and falling at the first turn, however she wasn’t seriously injured and will serve a seven day injury layoff.