Their dam, Sweet Fancy also has some very good winners on file from her other litters, whelped in January 2009 by Where’s Pedro, March 2012 by Larkhill Jo*, a second Brett Lee litter whelped in January 2013, then a December 2013 litter by Cosmic Chief, with a total of 33 named offspring from her five litters. 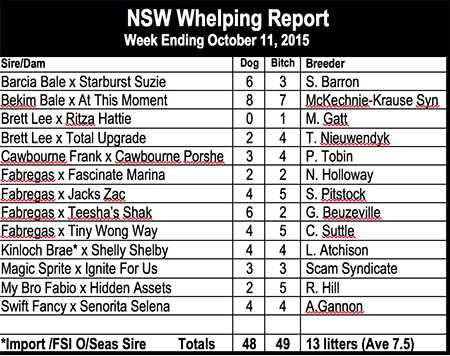 She is from a handy litter, which included Abbie Claire, Chance Taken, Hug Me Hugo, Perfect Chance, Riley’s Chance, Unreal Chance and Wayne’s Chance, with their dam’s only other litter, whelped in August 2011 by Mogambo also producing winners.

She has had instant success as a brood bitch, with good winners from her first litter, whelped in January 2014 by Premier Fantasy*, including Elusive Chance, Extreme Chance, Notorious Chance, Rear Chance, Shifty Chance and Took A Chance.

Our Layla is from a handy litter, which included Boston Bound, Fast Summer, Fluer De Pettigo, Hurricane Razor, Miss Louise, Simply Wonder, Tuscan Storm and Where’s Pettigo, with their dam’s only other litter on file, whelped in December 2007 by Bond, also produced some good winners.

This is her second Cosmic Rumble litter, after she whelped the first in July 2014 which resulted in two dogs and seven bitches, after she had a litter of three dogs and five bitches by Take The Kitty in February 2013.

TWO litters on the list this by the 2010 Melbourne Cup winner El Grand Senor (April 2008 Where’s Pedro x Elgrando Gold) with 10 pups in the first of the two litters, registered by the Will Obey syndicate, from Silverdale.

Blow The Doh is from a handy litter which included, Chelsea Who, Gotcha Good, Groovy Andrew, How’s It Maggie, Lady Arabella, Maggie Addis and Take That, with their dam also having a July 2013 litter of three named on file, by Vee Man Vane, with one named in each of two other litters, whelped in November 2012 by Take The Kitty and May 2014 by Cape Hawke.

She is from a litter of four named, which included Doo Wop Hooligan, My Big Digger and Unorthodox, with their dam having winners on file from each of her four other litters, whelped in November 2009 by El Galo, July 2010 by Bombastic Shiraz, May 2012 by Cosmic Rumble and September 2013 by Magic Sprite.

According to my breeding records, she has one previous litter on file, one dog and three bitches, whelped in March 2015 by Cosmic Rumble so keep an eye out towards the end of the year.

Megsy Anna is from a litter of four named which included, Graceful Miss, Rampart Lion, and Soviet Missile, with their dam also producing some handy winners from her four other litters, whelped in May 2009 by Spiral Nikita*, July 2010 and December 2012 by Mogambo, and May 2012 by El Grand Senor.

She is from a litter which included Boopa Louie, Dusty Moonshine, Mack Station, Moonshine Pearl, Moonshine Taylah, Moonshine Whippy and Wild Moonshine, with their dam also having considerable success from her other litters, whelped in December 2009 by Brett Lee and May 2012 by Collision, which included the outstanding sprinter Shakey Jakey.

Moonshine Lani has one previous litter on file, one dog and one bitch, whelped in November 2014 by Collision.

She is from a handy litter which included Kasey, Lollipop Cody, Luaki, Proper Glory, Proper Image, Remarkable Alice, Sofey and Tough Linc, with their dam’s only other litter on file, whelped in August 2013, by Fabregas, producing Davey, Defy Emotion, In The End, Jeanie, Katey, Kimmy, Lillipop Pop and Merly. 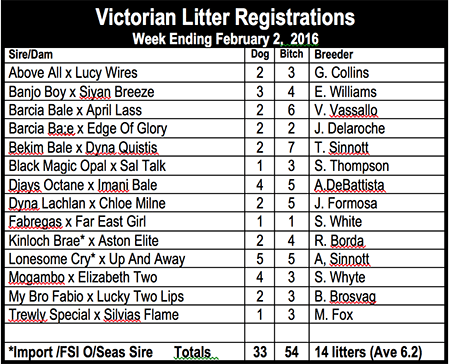 TURNING our attention to the Victorian Litter Registrations list for the week ending February 4, first up we have a beautifully bred litter of five pups by the New Zealand bred, Group 1 Hobart Thousand winner and outstanding stud prospect, Above All (July 2012 Magic Sprite x Kara Jinx) whose dam is by Fashion Thief (No Intent x Token Fever) from More Than This (Shining Kev x Little Girl Lost).

Lucy Wires won the Group 3 Sydney Cup at Wentworth Park and was placed three times at Group 1 level in a career which spanned 32 starts and resulted in 13 wins and nine placings, which earned connections just short of $130,000 in stakes.

This is her second litter, after she whelped a nice litter of six dogs and one bitch, by Mogambo, in January 2015, and I cannot wait to see the first of her offspring reach the track towards the end of this year.

NEXT we have a nice litter of nine pups, registered by Toolleen breeder, Aaron Debattista, by the highly rated US sire Djays Octane* (December 2006 Flying Penske x One More Secret).

She has two previous litters on file, one dog and nine bitches, whelped in March 2014 by Turanza Bale, then three dogs, whelped in January 2015 by Barcia Bale.

The two dogs and four bitches are from his beautifully bred, proven brood bitch, Aston Elite (December 2008 Bombastic Shiraz x Elite Oriental) whose dam is by Elite State x Oriental Angel (Knockabout Wok x Anniston) and it is worth rememberning, Anniston is by the US import, Fortified Speed x Goddess Of Fire (Light Of Fire x Tranquil Flame).

Elite Oriental has also produced winners from each of her other litters, whelped in July 2009 by Where’s Pedro, March 2010 by Pure Octane, November 2011 by Collision, and July 2012 by Made To Size, and has one named from a july 2013 litter by Outa Credit.

OUR final litter for review this week is 10 pups by the beautifully bred, veteran US sire, Lonesome Cry* (June 2001 Gable Dodge x Jabberin Jackie) who has done well at stud here from limited opportunities.

Yambuk breeder, Ann Sinnott, has this litter of five dogs and five bitches, from the 2010 Group 1 Sandown Laurels winner, Up And Away (March 2009 Where’s Pedro x On Shore) whose dam is by Waterview Star x Bally Kay (Fitzroy Express x Springress).

Up And Go is from her dam’s first Where’s Pedro litter, which included Across The Drink, Another Jim, Boy It’s Sandy, Sure On Pedro, To Shore and We’re Sure, and in addition to winners from the second Where’s Pedro litter, whelped in December 2012, On Shore also has a very good March 2011 litter by Meticulous, her own successful January 2012 litter by Lonesome Cry*, then has four named, all winners from her most recent litter, whelped in September 2013 by Velocette. 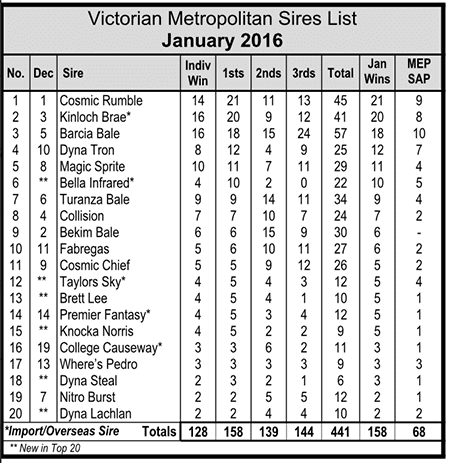 Kinloch Brae* had another good month with eight wins, to hold down third spot, but the other big mover was Magic Sprite, whose 15 February wins takes him to fourth on the list, ahead of Dyna Tron who completes the top five.

Just outside the Top 20 on the Victorian list at the end of February, all with four wins but less placings, are Kilty Lad (4-5-3), Lochinvar Marlow (4-5-3), Razldazl George* (4-2-3) and Kelsos Fusileer* (4-2-2) followed on three wins each by Dyna Lachlan, Stagger, Cape Hawke, Nolen, Djays Octane*, Razldazl Jayfkay*, David Bale and Farley Turbo*.

Winners for the top two Victorian metropolitan sires during February, and their dams, were as follows: 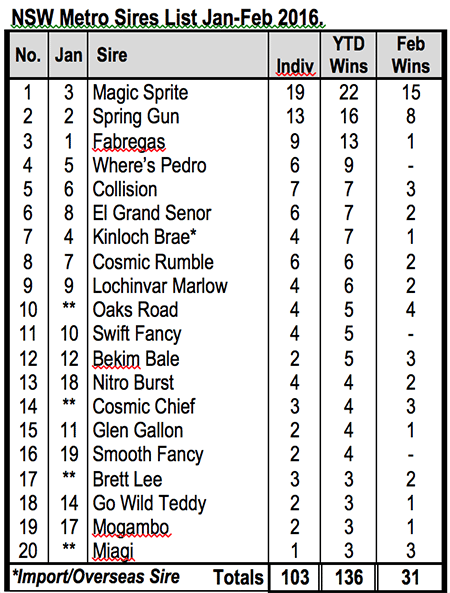 THE NSW Metropolitan Sires list, covering all meetings at Wentworth Park for the two months to the end of February has also seen a turnaround, after Magic Sprite’s offspring won 15 races in February to take him to the top of the list, with 22 wins, six wins clear of Spring Gun, whose offspring won eight races for the month, taking him up to 16 wins.

February winners for the top two NSW metropolitan sires, with their dams are as follows.