NSW trainers Eileen and Gary Robertson made a lucky escape on Thursday afternoon, as one of the state’s most menacing bushfires loomed ominously close to their house and property.  The Robertsons are located on Cabbage Tree Road at Williamtown, which has been heavily affected by the fire- with the Williamtown Airport closed until further notice and residents asked to evacuate the area.

“We have been affected by the Heatherbrae fire”, Eileen Robertson explained, “We are on Cabbage Tree Road, between Nelsons Bay Road and Masonite Road. They had the normal fires on Sunday where they were doing back burning, but this one apparently was deliberately lit- so we’ve been told”.

“We went out yesterday, I was supposed to be going into town to get some stuff for the dogs and Rachael (Eileen’s daughter) said, ‘Oh mum I have a funny feeling. How about if we get in my car and just go around and have a look and see what the other things have been doing since the fire on Sunday’”.

“We had only gone from here; we went through to Tomago, went up to Heatherbrae and came back through. We got to Masonite Road and I got the emergency call on my phone to evacuate now”

“Within the hour we had to get 38 dogs off the property. Connie Honnery text me and said ‘are you ok’ and I said ‘no if you can get down here with trailers, I have 38 dogs to get out’”.

“I had to wait for people to come. Connie Honnery and all them were three quarters of an hour away.  They got so close and then they got turned away. They said that they couldn’t go up there”

The Robertsons had to battle the approaching blaze as they loaded up their precious chasers, before taking them to Unibet Gardens.

“We just had to bundle dogs in cars and trailers and get them out. I had about nine of them in the back of the car, four in the trailer and one in the front seat. I had dogs everywhere, there was about three or four car loads”.

“All the grass and trees next door got burnt, but we were very very lucky. When we looked down the back and the winds were blowing a gale you could just see this big red fireball coming and we still had more dogs to get out- we thought we were in big trouble”.

“You couldn’t see- all you could see was this red and blue smoke. I have never seen a big fireball like it and it was just there. I was picking up dogs and chucking them in cars and making sure every dog had a muzzle on because there were dogs that hadn’t been with the other dogs and I had to make sure they weren’t going to fight”

The Robertsons were assisted at the Gardens by track manager, Kayla Spliet, as well as some other local trainers willing to lend a hand

“Kayla did a fantastic job with me yesterday, getting water bowls and everything like that to look after the dogs in there and she was taking them out and emptying them out for me”

“I couldn’t thank anybody enough- Terry Callen came over and he had a bag of kibble and bowls and god knows what else.”

“People have still been ringing this morning saying are you ok? Can we do anything? It’s just a real good feeling to know that people still care about you “.

It was great news for the family this morning. After a terrifying night, they found out their house had been spared.  However, it has still left its mark on the property and surrounding area, acting as a reminder of how close they came to losing everything

“It has all worked out for the better”.

“I was expecting to come home here and not find the house. I was that down. As soon as I got in the car I thought ‘I’ve lost my bloody house’ and I started to get all worked up. I knew I had to calm down because the dogs would feel that I was getting upset and that makes them all upset”.

The Robertsons should be able to take their greyhounds home tomorrow. For now they are being lovingly looked after by Sonya and Garry Greene, Natasha and Michael Benhard and Connie and Peter Honnery.

The experience also highlighted the wonderful people we have within our sport. In one familiy’s time of need, the greyhound racing fraternity united to do everything they could to help out, proving just how kind-hearted greyhound racing participants are

“We get a bad report from the 7.30 report saying all us dog people are bad people and I thought they need to know this side of the story- how all these people came to give a hand. It was unbelievable. I had people offering me clothing and that sort of stuff- but I said I was right- the main thing I got out was the dogs and the dog papers”. 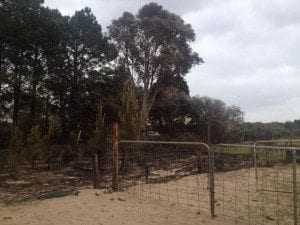 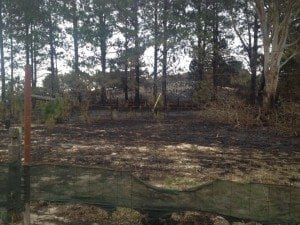 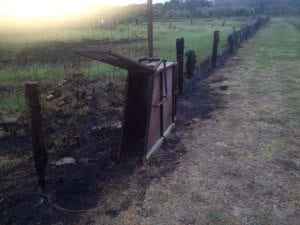