SCOOTER is the quintessential ‘pet’ greyhound.

Living on a diet including takeaway and spending much of his life inside the house, the black pooch is as spoilt as they come.

However, this Friday, the 33-kilogram dog will give his owner/trainer Terri Morris the chance to win a whopping $420,000 when he contests the world’s richest greyhound race, the Group 1 Melbourne Cup (515m) at Sandown Park.

Known as Jesaulenko on the racetrack, the son of College Causeway and Elite Fairy is one of the top sprinters in the country, having won 25 of his 50 starts, including his past three in a row.

His most recent run was a fast 29.31 performance last Friday when winning his heat of the Cup, convincing Morris that her chaser is ready to compete in the big final.

“He was a little bit underdone going into the heat because he had only had a couple of 440m races at Sale leading into the series, which probably wasn’t ideal,” Morris told Australian Racing Greyhound.

“But I did that for a reason – we have got to keep him on one turn tracks as much as possible because he has had a long term shoulder issue, so keeping him on the one turn tracks puts less pressure on it.

“I hand-slipped him [on Tuesday] and he went beautiful and I have had him checked by Des Fegan and he is well within himself, so if he gets a clear run this week I think we can expect a big performance.

“I try to keep him off the track in between runs as much as possible. He does most of his work on the walking machine and he has a slip at my parent’s place, but I try to avoid trialling him.

“I think he is at his peak. I don’t think he could be going any better than what he is.”

In order to triumph on Friday, Jesaulenko will have to defeat a quality field including five-time group winner Zambora Brockie (box three), Ando’s Mac (box five) and Outside Pass (box six), but Morris says she is confident going into the race after coming up with box eight.

“He has been boxing beautifully so it didn’t really worry me what box he got. 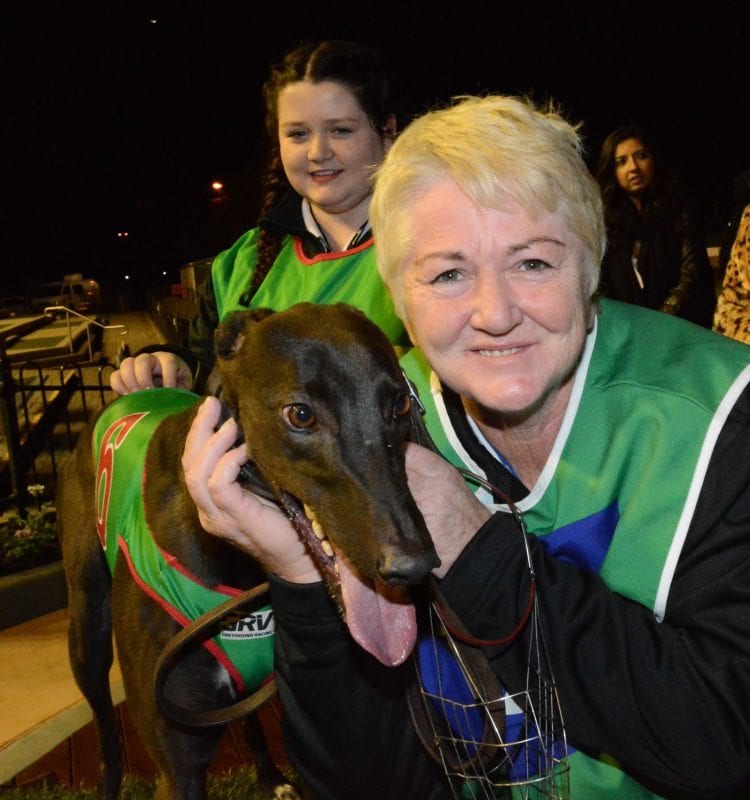 Terri Morris with her star greyhound Jesaulenko
It would be an especially rewarding victory for Morris if her sprinter is to take out the world’s richest greyhound race on Friday, having bred Jesaulenko from her parent’s line.

“It means a lot to me because of the work my parents (Terry and Bev Proctor) have put into this bloodline.

“They have bred with this line for 30 years and this was the first litter I bred myself, although mum was the one who recommended to breed with College Causeway in order to bring some of the Irish breed into the line.

“I still ring them up and ask them a lot of questions to this day, the knowledge that they have got I try to use as much as I can.

“It is really special to make a Melbourne Cup with this dog from mum and dad’s line. They are really proud of me, but I am just as proud of them because they had done all the work to get the line where it is today.”

And Morris said she hasn’t broken ritual heading into Friday’s race, with Jesaulenko still enjoying his ‘treats’ at home.

“He has the worst diet, but it works for him,” she laughed.

“He gets cheese and bacon rolls for breakfast, on race day he gets Weetbix and honey with milk and a banana.

“Even [on Monday] when I took him to get checked we kept up our ritual – he got a king size sausage roll and I get a pastie.

“He has got a cast-iron stomach.”

Win, lose, or draw this Friday night, one thing is for sure: Jesaulenko will be getting his happy meal and soft serve on the way home.

That’s what Greyhound Racing is all about  the battler, Go Jesaulenko and good luck Terri