It’s the saga that has disgusted a nation.

As the backlash continues over the greyhound live baiting debacle which came to light this week, AustralianRacingGreyhound has taken a look at the response captured on Twitter, Facebook and emails sent directly to our website.

It’s fair to say that ARG has never seen an issue like this one gain such wide-spread attention and receive such passionate feedback.

From the moment the Four Corners report, titled ‘Making a Killing’ aired at 8pm on Monday night, the hashtag #4corners went viral.

Thousands of Australians (and even one South African cricketer) tweeted about the story and the message was very clear – this is the greyhound industry’s darkest hour:

In response to our online coverage of the saga, hundreds of readers took to Facebook to have their say: 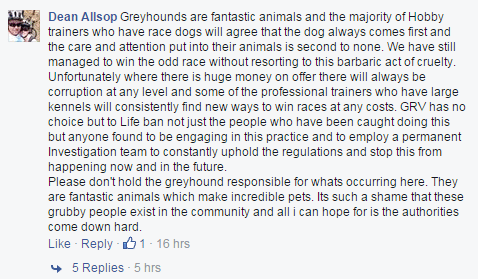 Finally, the ARG servers were sent to bursting point with hundreds of your emails.

I love greyhounds and enjoy watching them race but unfortunately the latest media coverage has given greyhound racing a bad name.
I hope you are taking responsibility for the disgraceful and cruel behaviour of trainers that use live bating. Their behaviour should not be tolerated and you need to cancel their licences. They cannot be trusted around any animals.

As a NSW Nurse Registered with AHPRA I feel the need to ask you to address the issue of “live baiting”
I am currently dealing with an extreme state of distress whilst 4 Corners has displayed extreme cruelty to a) piglets b) a mother and baby native possum and c) terrified rabbits.
I have wept and felt physically unwell due to the psychopathic cruelty of some of your members.
Please address this by barring those disgusting and disordered perpetrators immediately.
I attend a Vetenarian with my pets who works for Greyhound rescue. Greyhounds are wonderful gentle dogs. Don’t allow them to be brainwashed into killers .
Kind regards
Christine Earlam RN BSc

I have just watched the four corners program and I am totally disgusted by your industry. The exposure of animal cruelty by ‘star’ trainers. Do something about this. DISGUSTING! Lay charges on the people who do this and ban them for LIFE. I hope they are jailed.

An extraordinarily shameful expose of your industry s systemic barbarism. I will shudder every time I drive past Wentworth Park. I look forward to seeing many go to prison and living in complete shame.

From: Peter Gowans
Subject: The use of live animals

Never been a fan but after watching Mondays nights Four Corners it confirmed my opinion. I hope that governments wake up and wipes your industry out completely. You care nothing about the dogs you exploit and even less for the “bait” you use to encourage them.

I have just seen the ABC report and cannot believe what they have just broadcast. Your industry should be closed down, your senior management and those in the video should be prosecuted and jailed and monies seized as proceeds of crime. The practices shown which involve the stars of your industry are utterly disgusting..shame on you all

Totally disgusted by what I saw on “Four Corners” last night and believe me I couldn’t watch much of it all. Hope that the full force of the law is applied to these ferral people concerned and that they get what they deserve in every way. Also hope that you as an industry take strong action. How can this be considered a part of training for a sport? The words “cruel” and “barbaric” are no-where near enough.

Today, AustralianRacingGreyhound.com had its say on the issue through its founder, Kevin Pitstock. To read Kevin’s stance on the saga, click here.

Do you have something to say about the live baiting saga in greyhound racing? Get in contact with us here.

Note: AustralianRacingGreyhound.com is a news website that covers the greyhound industry and in no way has any links or affiliation to the governing bodies of the sport. The site is managed by editors, experienced greyhound journalists and writers. We have no official standing within the sport and act only as an independent news source.

Sam, I’m sure you and your friends do the right thing but you are living in a bubble if you think there’s only a fraction in the industry that are involved in barbaric practice. TOM NOBLE has been quoted saying, “if authorities seized all the dogs involved in live baiting there wouldn’t be enough to run one race.” Thousands of dogs are reported to be put down every year because they could not/owners couldn’t be bothered to remove them. The comparison between athletics and greyhound is also ridiculous. Yes, there are cheats in all sports but taking performance enhancing drugs… Read more »

and the problem is that the greyhound racing organisation have not taken proper action. This has not been an important enough issue for them. It had been Greyhound Racing NSW have stated in their information guide that they do property check ONCE every TWO YEARS. They also claim to impose an ‘extensive ban’ on those proved to be live baiting – not a life ban. An ‘extensive’ one. And, when I asked what that meant they deleted my post on their wall – I.e it could mean anything!

I feel sorry for the people who love their dogs and do the right thing but arguing that this is not a systemic issue when big people in the industry have been getting away with it for years and the organisation have allowed it does not do anyone any favours.

I’m a dog trainer. Live baiting is wrong I wouldn’t be do it…….. My boss told me today, now you know what it’s like to be a Muslim.

As a greyhound owner and breeder I’m astonished at the uneducated responses to the industry! Yes there are bad apples in the industry. I’ve cared for my greyhounds and they always come first! Never put one down and always rehomed them. Live baiting has been around for years and is not acceptable this day and age. Tom Noble was old Skool and set in his ways, I’m surprised he got away with it for as long as he did. Reform is needed like limited numbers of dogs to a trainer, limited litters to brood bitches. Fightback lures too. Licenses are… Read more »

Your dogs are terrorists I take it lol

Yes, the one’s that are doing the right thing are tarred with the same brush, That’s unfortunate, but how do you know it’s a minority, obviously you must know people that condone this practice. There is no room for animal cruelty at all. And It’ not animal liberationists that are disgusted by this, most people in all walks of life are sickened by this practice. Obviously MONEY comes before Morality, so these scumbags don’t care less how they get it, as long as they get their payday.

Jedda hobbs you are a total spinner, obviously you dont know how much work goes into training them.