The Capalaba Club committee today (28 July) voted unanimously in favour of a co-operative management arrangement with the Brisbane Greyhound Racing Club, which will see them takeover the administration of the Redlands-based Club.

Capalaba Greyhound Racing Club is a non-TAB race track, which is the only straight track in Queensland, and races Saturday afternoons as well as Melbourne Cup day.

The agreement will see the Brisbane Club ensure the management and promotion of straight track greyhound racing in South East Queensland, assist participants in their various forms of involvement with greyhound racing at Capalaba, and provide an exciting entertainment product for on-course patrons at the Capalaba venue.

The proposal was raised by the Brisbane Club after Capalaba Greyhound Racing Club secretary Bob Patching announced he would be resigning from his position in September.

Capalaba Greyhound Racing Club president Alec Stevens said the decision to enter into this agreement was made to ensure the financial future and success of the Club. 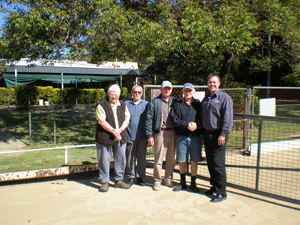 “The Committee of the Capalaba Club have carefully considered what will be in the best interests of the Club in the long term, and believe that our association with the Brisbane Greyhound Racing Club will have a positive impact on our business operations, our financial position and on our service to greyhound industry participants,” said Mr Stevens.

“We will ensure the financial viability of the Club through our alliance with Queensland’s principal greyhound racing club.”

The agreement is an added boost for the Brisbane Club, coming off the back of its most successful Winter Carnival to date with TOTE turnover increasing more than 30 per cent on previous years’.

“Capalaba is unique as it is Queensland’s only straight greyhound racing track, and provides for a wonderful picnic-style atmosphere on Saturday afternoons at the gateway to the booming Redland City,” Mr Byrne said.

Chair of Greyhounds Queensland Limited, the industry controlling body, Kerry Watson, said it was a step in the right direction for greyhound racing in South East Queensland.

“This is a positive step by the Capalaba Club,” said Ms Watson, “I’m confident Luke Gatehouse and his talented staff will be able to advance straight track racing at Capalaba.”

The Capalaba Greyhound Racing Club was established in 1947, and originally hosted 12-dog races with both hurdles and on the flat over 290 yards. In 1987 the track was relocated to its present site closer to Tingalpa Creek, and races every Saturday afternoon and Melbourne Cup Tuesday.

The Brisbane Greyhound Racing Club was established in 1972 at Woolloongabba, and later relocated to the Albion Park Raceway to make way for The Gabba redevelopment in 1992.