ZAMBORA Brockie has been retired to stud following his third placing in a heat of the Group 1 Australian Cup (525m) at The Meadows on Saturday night.

Trained throughout his career by Anthony Azzopardi, Zambora Brockie faced the starter on 53 occasions from which he amassed 31 wins and 12 minor placings.

Azzopardi broke the news on social media on Monday morning and told Australian Racing Greyhound that despite the dog still being in great form, now seemed like the right time to retire.

“He is three-and-a-half-years-old – he has done enough and he has got nothing left to prove to anybody,” Azzopardi said.

“He is absolutely flying still, but I spoke to the owner and we decided to pull the pin now because people want to use him at stud.

“We didn’t want to get to the stage where he was getting beaten and disgracing his name either – he is such a great dog and he doesn’t deserve that.

“On top of those things I would never live with myself if we kept racing him and he fell over and hurt himself.

“There is no need to push him.”

A son of Nitro Burst and Flying Liddy, the black dog is owned by Charlie Azzopardi and started his career on April 4, 2015, winning a maiden 400m event at Bulli in a fast 22.39.

He then went on to win three of his next four starts, all of which were in best of day times, at Dapto, Ballarat and Warrnambool.

Zambora Brockie won his first group 1 event in October 2015, taking out the Vic Peters Classic (520m) at Wentworth Park in a scintillating 29.58.

Following that win he headed to Melbourne where he contested a heat of the Group 1 Melbourne Cup (515m), finishing down the track behind Dyna Double One. He then returned to Sydney, winning five of his next six starts.

When Azzopardi relocated to Victoria in early 2016, Zambora Brockie made the move too, with his next major victory being in the Group 2 Warrnambool Cup (450m) in early May.

Five starts later the speed machine added another trophy to the cabinet, taking out the Group 2 Horsham Cup (480m).

Next it was a trip to the sunshine state where ‘Brockie’ once again proved his dominance, winning the Group 1 Winter Cup (520m) in a fast 29.74.

After his victory in Queensland, Zambora Brockie ran a blistering 29.14 at Sandown Park before heading to The Meadows where he won his heat and final of the Victorian Sprint Championship. 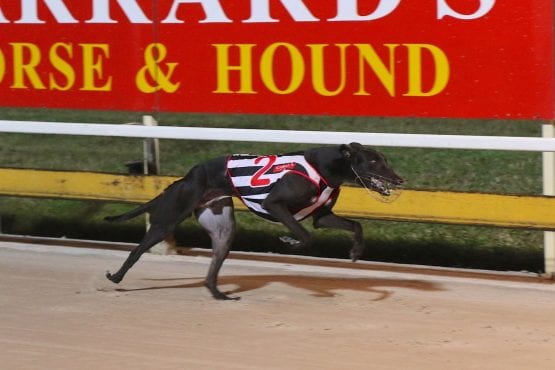 The win booked him a spot in the Group 1 National Sprint Championship (515m) at Angle Park, finishing a gallant second behind local hope Worm Burner.

After three luckless runs following his Adelaide second, Brockie returned to his best at Sandown Park when winning a FFA in 29.40.

The next week, he made it back to back successes when taking out the Group 3 Sandown Shootout (515m) in a fast 29.17.

Then it was a second attempt at the Melbourne Cup and this time Zambora Brockie was brilliant, winning his heat in 29.06. However, the 31-kilogram rocket had no luck in the decider, running sixth after early trouble.

Following the Melbourne Cup, Azzopardi took his kennel star to Bendigo where he dominated winning his heat and final of the Group 2 Ballarat Cup (450m), pocketing an additional $50,000 on top of the $77,000 winner’s cheque as a bonus for winning three country cups within a calendar year.

“He was a machine from day one,” he said.

“His first trial at Richmond he lost the turn completely and he ran 19.90 and I took him back four days later and he ran 18.70.

“At his third trial he ran 18.32 and I rang Charlie and I told him that we had one of the best dogs in the country.

“I remember being very nervous before I started racing him because I didn’t want anything going wrong, but as soon as we got him racing it has just been an exciting ride all the way through.”

Azzopardi also announced that he will be standing Zambora Brockie at stud for a price of $1,950 put GST. He is expected to be available for breeding use in three to four weeks.

“One of his best attributes was his chasing ability, but he also had pace and his run home times were brilliant – he was just the whole package.”