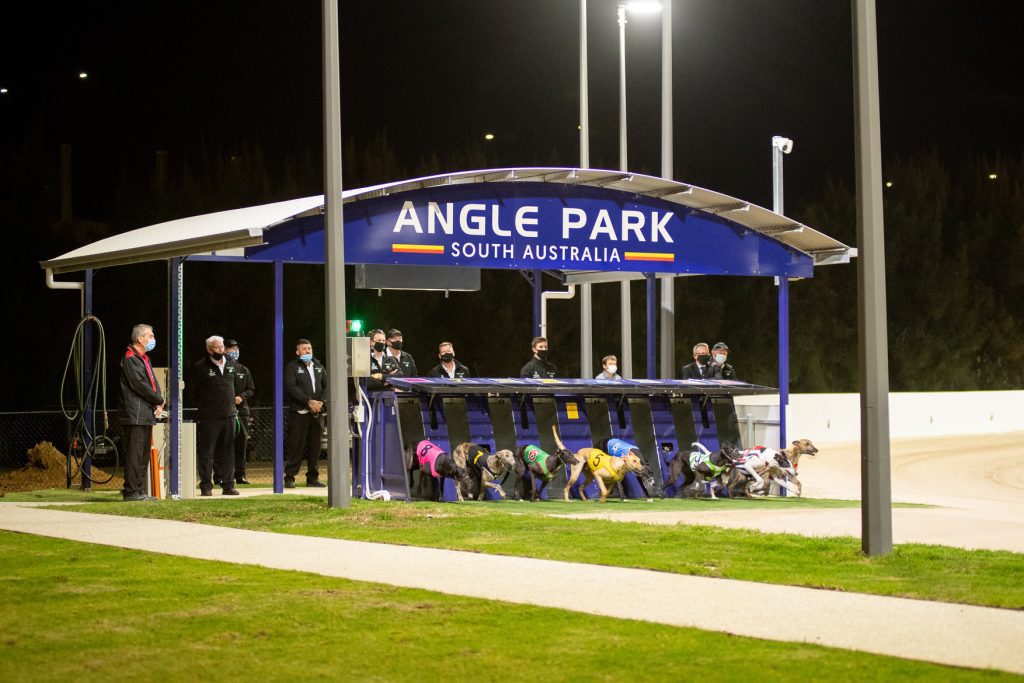 Charlee’s Misty is only new to South Australia having her first start last week in the heats where she ran an encouraging second after being purchased by Ed from NSW.

The daughter of Fernando Bale and Flighty Egyptian made full use of her inside draw as the start was affected, railing hard to the first turn to challenge for the early lead. There was a five way drive for the lead with Charlee’s Misty joined by first reserve, Nikita for Don Turner, Clear View for Tara Rasmussen, Springvale Rex for Gavin Harris and widest of all was Fantastic Faith for Ossie Chegia.

Race favourite, Lot Of Poise for Tony Rasmussen was back near last and in traffic after a slow beginning. As they raced into the first bend Charlee’s Misty asserted her authority on the race and pushed hard to lead with Nikita following through while other runners received checks to varying degrees due to such tight racing.

As the field settled themselves into their racing positions into the back straight Charlee’s Misty scooted away with the lead quickly followed by Nikita, second reserve Paul Keeping for Jack Trengove took advantage of the tight racing and scrambling for positions and moved to third just ahead of Fantastic Faith.

Off the back straight the field was basically in single file with Charlee’s Misty proving very hard to catch. Turning for home and Charlee’s Misty was going nicely in the lead and kicked clear with Nikita being challenged for second place by Paul Keeping who made ground along the rails.

Down to the winning post and Charlee’s Misty came clear for a strong win in a slick 30.83 in winning by over four lengths from Paul Keeping who ran home well for second just ahead of Nikita who battled on into third just ahead of Fantastic Faith.

It was a great feature win for Ed, who only has two dogs in work and helps soften the disappointment from last September when he had one of the favourites for the SA Oaks, Zipping Decoy after her brilliant win in the heats but unfortunately was scratched just days before the Group 3 final.

Charlee’s Misty now has the handy record of 21 starts with five wins and nine placings with career prizemoney around $19,000.