THE New South Wales Government is spreading an anti-greyhound racing campaign across a variety of media outlets, leaving participants angry about ‘not getting a fair go’.

In a blatant attempt to justify shutting down greyhound racing to an enraged public, the campaign includes full page notices in the Daily Telegraph, as well as radio advertisements.

While many in the industry have acknowledged the wrongdoings of the past, the campaign has further enraged a devastated greyhound community, with many of the facts being advertised coming from the McHugh report released last month, which now has serious questions surrounding its accuracy.

“I cannot recall a Government ever using public funds to protest against a community like ours in this way,” Scott said.

“We have every right to be stating our position for maintaining the industry, and for the Government to use public funds to come out and reinforce information which we have said is false is outlandish, outrageous and unprecedented.”

The print and radio promotions both state that up to 70 per cent of greyhounds are deemed wastage by the industry and 4074 dogs are ‘slaughtered’ each year. However, figures from the NSW Greyhound Racing Industry Alliance show the actual amount is less than 10 per cent of that inflated amount.

Greyhound Racing NSW (GRNSW) figures submitted to the Special Commission of Inquiry indicated only 6.9 per cent of greyhounds are unnecessarily, humanely euthanised, with other allocations of dogs being 55.4 per cent remaining with owners/trainers or being re-homed, 12.7 per cent humanely euthanised due to injury or illness and 25 per cent dying from natural causes. 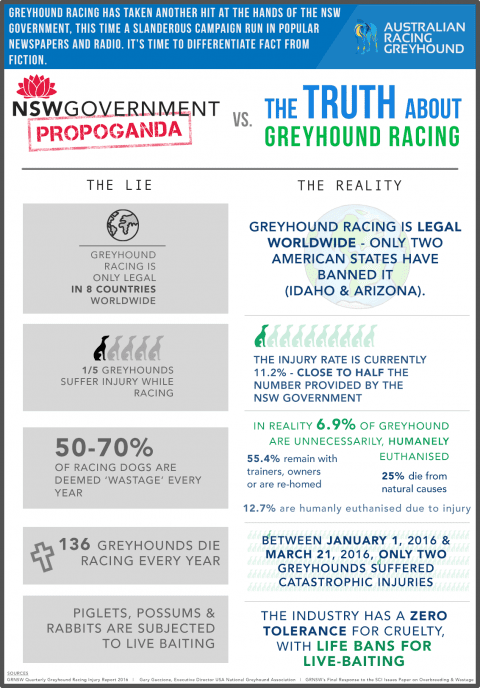 The Government further demonised the industry by stating that, due to it’s systemic cruelty, greyhound racing is only legal in eight countries, with the majority of the states in the US having imposed a ban.

Once again, this information is incorrect, with Australian Racing Greyhound’s Duncan Stearn clarifying that there has never been a time where the majority of the USA conducted greyhound racing, while he also highlighted that only two states from 50 have outlawed the sport – Idaho and Arizona.

This information was further supported by the Alliance, which sourced it from Gary Guccione, Executive Director of the USA National Greyhound Association.

Furthermore, the NSW Greyhound Racing Industry Alliance clarified following the first print advertisement that greyhound racing is legal worldwide – with only the two aforementioned American states having imposed a ban.

The Government’s campaign also states the average life of a racing greyhound is 1.5 years compared with nine years for a pet greyhound.

Participants on social media declared this comment was made despite the fact dogs are not able to commence racing until they are at least 16 months of age, with many continuing their careers until after four. The Alliance noted that a high number of greyhounds live happy and full lives post-racing, with dogs commonly living well into their ‘teen’ years.

Despite the campaigns also declaring that rabbits, pigs and possums are subjected to live baiting, the Alliance has indicated that the industry has zero tolerance for the abhorrent practice, with those found guilty of live baiting receiving life bans from the sport.

The main smoking gun used by the NSW Government, a report by ABC’s Four Corners program, resulted in very little action taken against live baiters because footage taken had been done so illegally. The people shown in the tape are unable to be persecuted because of surveillance and privacy laws in NSW.

Greyhound racing enthusiasts are keen to have these laws changed so those who are found to be doing the wrong thing can be prosecuted, rather than ostracised publicly, before ultimately not being charged with any offences.

Prominent broadcaster Ray Hadley was quick to slam the Premier Mike Baird for focusing on rumours that live baiting still exists within the industry, calling for enhanced laws to enable authorities to catch and persecute those engaging in the activity.

“Yes it’s horrendous, yes it’s dreadful, yes it shouldn’t have happened, but there has been no opportunity for Greyhound Racing New South Wales because of legislation under the Surveillance Act 2005 to remove these people from greyhound racing,” Hadley said on 2GB.

“[Mike Baird] could change that with the snap of a finger and give them the power to get rid of the cheats and the thieves and the hoons from the industry and leave the 80-90-95% of decent people to get on with their lives – but that doesn’t suit his agenda.”

The advertisements also proclaimed that 136 greyhounds die each year while racing, but according to GRNSW’s Quarterly Greyhound Racing Injury Report, only two greyhounds suffered catastrophic injuries while racing between January 1, 2016, and March 31, 2016, and were deceased or required immediate euthanasia.

Additionally, the campaign claims that one in five greyhounds are injured throughout their careers, however in the same time period mentioned above the injury rate was 11.2 per cent. This includes minor issues such as small nicks, and muscle strain – common injuries which are sustained by greyhounds on and off the track as a result of them reaching speeds of up to 70 kilometres per hour.

The Government has attained its information for the campaigns from the Special Commission of Inquiry report tabled by Justice Michael McHugh, despite serious doubts emerging about its accuracy.

Subsequently, the NSW Greyhound Racing Industry Alliance has made an application to the NSW Supreme Court in order to have the document declared invalid.

Deborah555 Sorry Deborah I am getting overheated I was in parliament house today and every time I talked about the Premter and the Deputy people burst out laughing.about the silly things they were doing. One of the howlers is that they are releasing figures on greyhounds which are only at best a guess and using terms like an average of  1. 4074 greyhounds on average are slaughtered each year. (Are greyhound cruel Government advertisement. This type of obscuration is used to convince people that the figure is accurate rather than a 4,000 estimate but the intent of this would not… Read more »

dogem53 No need to guess who he is you can profile him on the government site.

Google his name and NSW Member of parliament and follow the prompts.

John Tracey Deborah555  If I was a National I would be concerned about my seat as well. I agree that the party whip would regard his role as paramount but I do get the impression that he is highly intelligent and rational and maybe  he thinks democracy is a good idea- that’s the impression I get  of him. Baird of course is neither intelligent nor rational and appears to believe he is running a dictatorship.

but if my ears were correct,he tried today to upset our friend RAY HADLEY on 2GB…….emailed in that he was sick of RAYS standing by the dog people and refused to listen anymore to RAYS garbage……….RAY,IN NO UNCERTAIN TERMS TOLD HIM TO,WELL GO AWAY…..LOL

dogem53 Deborah555 John Tracey  I think you will find Jeff spends a lot of time “listening” but may have realised this is far beyond saving greyhounds.

It is a shame that this argument is going to turn away from its central point: That otherwise healthy dogs were being abandoned, injured and killed for the sake of profit and turn into a he said she said battle of competing and conflicting claims. Disappointing, but not surprising because everyone really knows the industry has no rebuttal for the central fact of greyhound racing and that is you kill dogs for profit. I am a Board member of Grey2KUSA Worldwide, an organization that fights to save these marvelous creatures all over the globe. (you can learn more about us… Read more »