THIS week’s review of litters selected from the Victorian Litter Registrations list for the week ending July 5, starts with a nice litter of eight pups by the 2013 Melbourne Cup winner, Black Magic Opal (May 2011 Magic Sprite x Awesome Opal).

She is from a litter of five named, which included Bold Desert, Hello Bekim, Tell Her and Tycoran Devil, with their dam also producing winners from her four other litters on file, whelped in, February 2010 by Pure Octane, October 2010 by Bombastic Shiraz, August 2011 by Premier Fantasy* and May 2014 by Barcia Bale. 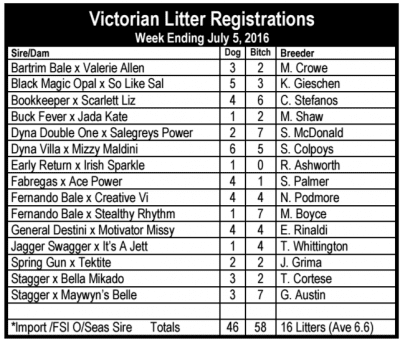 Scarlett Liz is from one of her prolific producing dam’s six litters, which includes Scarlett Bell, Scarlett Bron, Scarlett Cath, Scarlett Flash, Scarlett Ida, Scarlett Lucy and Scarlett Mal, with their dam’s five other litters being by Bekim Bale, Collison, Goodesy, Hallucinate and Whisky Assassin and resulting in a total of 37 named offspring.

She has done very well for herself as a brood bitch, with her first litter, whelped in December 2012, by Spring Gun, producing Bonjour Bonsoir, I’m A Gun, Lucks A Fortune, Scarlett Billy, Scarlett Dawn and Star Watch, then her second litter, whelped in October 2013 by Mantra Lad, produced Little Lizzie, Nanna’s Tribute, Scarlett Lad, Scarlett Millie, Shania Michelle, and Tyler’s Boy, and she has since whelped a litter of four dogs and two bitches by Zulu Zeus, in November 2014.

He only has five named offspring on file at this stage, Uncle Grub (x Brain In Neutral), My Name’s Emma, Stylish Al and Stylish Chief (x Isabrooke) and Rapid Drive (x Silent Rapid) who have all won, which is a great start to career at stud.

He is well bred, being by former top sire Bombastic Shiraz, and the thing that appeals to me the most is his strong winning form over 600 metres on Melbourne’s two city tracks where he won nine times.

She is from a litter of three named, which included Bowman Blue and Remo Cache, with their dam having 13 other named offspring on file from three litters, by Collide, Remo Baron and Where’s Pedro.

She has done well from her first litter, whelped in January 2013, by Fear Zafonic* producing Fear Me Roar, Jazzy New Year, Killara Gem, One Mid, Sindy’s Girl and Sloan Ranger.

He is from a very good litter, his dam’s second by Primo Uno, which included Flossy, Mario Chief, Stagger Uno and Stomp Stomp, after the first litter, whelped in February 2007, with only two named, but both raced at Group level, and she also produced winners from her four other litters, by Elgrando, Melbourne Cup winner, Surgeon, Train A Journey and Australian Cup winner Velocette.

She is from the first of her dam Night Storm’s two litters by Collision, of three named which included Fear The Storm and Storm Surge, with the second litter, whelped in June 2011 producing Black Tristram, Fast Turtle, Ice Storm, Loud Max and Maywyn’s Force.

Night Storm has four other named offspring on file, It’s Raining, whelped in March 2010 by Where’s Pedro, then Make The Switch, Night Tremors and Outside In, who were whelped in November 2012, by Fear Zafonic*.

Maywyn’s Belle has one previous litter on file, five dogs and one bitch, whelped in April 2014 by Dyna Lachlan.

I think Stagger has surprised a few people at stud, and he is currently just outside the top 20 on the Victorian Metropolitan Sires list at the end of July with 13 city wins this year from eight individual city winners.

TURNING our attention to the NSW Whelping Report for the week ending March 20, our first selected for review is one of seven pups by outstanding stud success, Collision (August 2001 Awesome Assassin x Rumble Spirit).

Physical is from a good litter, which included Mozoltov, Next Top Model, Perfect Model, Ritza Surf, Ritza’s Request and Sizzler, with their dam, By Request, also producing winners from both of her other litters on file, Whelped in July 2008 by Run’s House and December 2009 by Collision.

Physical raced five times for two placings, two seconds over 520 metres at Dapto, with winners on file from each of her first three litters, whelped in March 2011 by Where’s Pedro, December 2012 by Oaks Road and July 2014 by Knocka Norris. 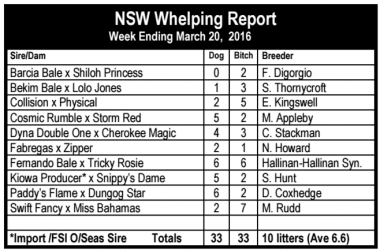 OUR next litter for review is one of 12 pups, registered by the Hallinan-Hallinan syndicate, from Clergate, by eleven times Group winner. Fernando Bale (March 20 Kelsos Fusileer* x Chloe Allen).

She is from a litter which included Tricky Ace, Tricky Ape, Tricky Dee, Tricky Levi, Tricky Mindy, Tricky Pluto, Tricky Rio and Tricky Summah, with their prolific producing dam having winners on file from each of her six other litters, by Bit Chili, Goodesy, Mogambo, Pure Octane, Slater and Smooth Fancy.

The five dogs and two bitches in the litter are from the well bred bitch, Slippy’s Dame (January 2011 Collision x Vergin’ Blue), whose dam is by Flying Penske* x Indigo Creek (Hotshot x Blue Blue Day), giving the litter a double cross of US bloodlines, combined with the best of our local lines.

Slippy’s Dame is from a litter which included Blue To Bits, Blue Too Me, Flying Zesta, Panpan, Rossi Oh, Snippy’s Silky and Shippy’s Shogun.

Their dam has one other handy litter on file, whelped in December 2012 by another imported sire, Fear Zafonic*, which included Fear Indigo, Fear Rodney, Gerry’s Commando, Rusty’s Cape, Sleek Penny and William Mac.

On the track, Snippy’s Dame raced 32 times for six wins and four placings, winning six times over 520 metres at Albion Park (30.22) in Queensland where she did all of her racing.

DON’T often see a litter on the list by the well bred, under-rated sire Paddy’s Flame (January 2006 Larkhill Jo x Miss Holly) but Dungog breeder, Daryl Coxhedge, has a nice litter of eight pups by him on this week’s list.

She is from a litter of eight named, which included Check Ya Later, Cosmic Tigress, Cyclone Dave, Foxman Bro, Iron Will, Let It Rip and Which Secret, with their dam having winners on file from her four other litters, two by Big Daddy Cool, and two by Bit Chili.

The two dogs and seven bitches, which should appeal to prospective buyers with future breeding in mind, are from the beautifully bred bitch, Miss Bahamas (April 2008 Droopys Kewell* x Norway Girl), whose dam is by Head Honcho x Counterfeit Girl (Light Of Fire x Tranquil Flame).

She is from a litter if three named, which includes Rudd’s All In and Sudden Lift, with their dam having 11 other named offspring from three litters, by Addis Boy, Bombastic Shiraz and WW Apple Jax*.

Her breeding career has got off to a good start, with winners from her first two litters, whelped in May 2011 by Cosmic Chief and May 2012 by Milldean Panther*, with winners in both, then she whelped a litter of three dogs and three bitches, by Fabregas in September 2014. 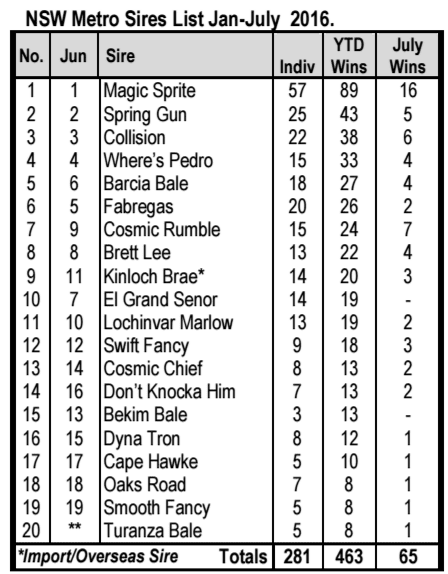 MAGIC SPRITE dominated racing at Wentworth Park during July with another 16 wins which increased his lead on the NSW Metropolitan Sires list by 10 wins.

He now sits on top of the list with 89 wins from 57 individual winners which puts him a massive 56 wins clear of his nearest rival, Spring Gun, who has 43 wins, followed by Collision with 38 wins, Where’s Pedro 33 wins and Barcia Bale 27 wins completing the top five.

Just outside the top 20 both with eight wins each are, Glen Gallon (3-8) and Surf Lorian (3-8), followed by Nitro Burst and Dyna Lachlan with six wins each, then Fear Zafonic*, Big Daddy Cool, Mogambo, Sure As and Miagi, with five wins each.

Winners for the top three July sires, and their dams were as follows:

COURSING this weekend returns to Lang Lang where the feature event on the program will be the GOTBA Cup.

This will be the last hit out for some of the main contenders in the time-honoured Waterloo Cup, the final meeting for the season, to be held at Lang Lang on Saturday August 20 and Sunday August 21, with the first course at all meetings at 10.00am.

BLIPPLE ( Black bitch June 2013 Fabregas x Chevy Princess), Trained at Pearcedale by Angela Jackson. Won over 720 metres at Wentworth Park, November 2015 before two unplaced runs, 545 metres at Coonabarabran, March 16 and 525 metres at The Meadows, June 11, beaten 7.5 lengths, before sixth from box 7 Sandown (SAP) July 31, beaten 6.7 lengths in the race won by Giroud (30.07). Could be looking for more ground as she gets fitter and stronger with each run. Only raced 11 times for four wins so has ability.

CHARMAN ( Black dog, April 2014 Nolen x Set To Talk), Trained at Arcadia South by Ray Mathews and has now had 10 starts for five placings. Last start second from box eight, Sandown (SAP 515 metres, July 31, behind Elusive Jewel (29.73) beaten 4.33 lengths. Not always easy to get across from the eight there and might be better closer to the fence, but not far off a win.

NEXT week we will have the Victorian Metropolitan Sires list for the seven months to the end of July, AGRA breeding rankings for the same period and our usual review of litters from both Victoria and New South Wales, and of course any news that comes in through the Mailbag.