THIS week’s review of litters selected from the NSW Whelping Report for the week ending November 22, 2015 starts with a nice litter of nine pups by the multiple group 1 winner Keybow (December 2011 Take The Kitty x Key Exit) whose dam is by Over Flo x Atlanta Belle (Black Shiraz x Georgia Belle).

Black Riband is from a litter of four, which included Secret Stash, Summerhouse and Swift Pirate, with their dam, Ultra Swift, also producing good winners from her other litters, by Big Daddy Cool, Give Me Five and Surf Lorian. 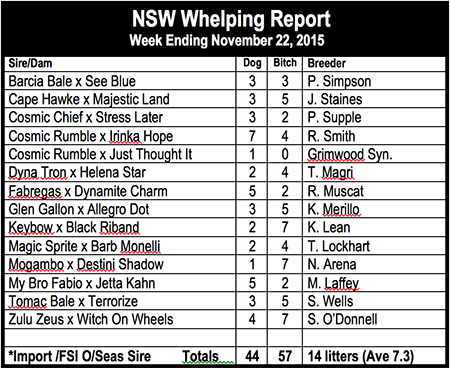 According to my breeding records she whelped one bitch in September 2013, by Cosmic Chief, and had a mating to Cosmic Rumble which has no pups recorded, but she certainly had no problem this time with a nice litter of six pups by Magic Sprite

PIPERS FLAT breeder Nicholas Arena has our next litter for review and with one dog and seven bitches in the litter it should attract plenty of interest from prospective buyers with future breeding in mind.

She also has two Brett Lee litters on file, with the first, whelped in August 2012 having four named, Aeroplane Sally, Destini Diamond, Destini Lobo and Presto Destini, then December 2013, also with four named, Destini Inferno, Destini Scorcher, Destini Spark and Destini Wildfire. Giving her a perfect record with winners from her four litters.

Terrorize is from a litter which included, Concealed, Cortex, Little Miss Chop, Petticoat Polly and Transcendence, with their dam having five other named offspring from two other litters, whelped in November 2012 by Surf Lorian, then November 2013 by Spring Gun.

On the track, Terrorize raced six times without placing, at Taree, Gosford, Nowra and Canberra, but I would suggest it would be better to forget she ever raced, look at her pedigree and her potential as a brood bitch.

According to my breeding records, she whelped a litter with one dog pup registered, in August 2014 by Barcia Bale, bred by Wodonga breeder, David Carter.

The Witches of Woonona

OUR final litter for review from the NSW list this week is one of 11 pups by promising sire, Zulu Zeus (April 2011 Where’s Pedro x Fancy Jaffa) whose very good producing dam is by Collision x Flash Fancy (Brett Lee x Miss Fancy) and it is worth recalling, Miss Fancy is by the successful Irish import Barneys Alarm* x Gay’s Fancy.

Gay’s Fancy was an exceptional race bitch who was a finalist in the NSW St. Leger (now known as the Paws of Thunder), Vic Peters Classic and the Young Star Classic, who has also been a very good producer and granddam of 2010 National Sprint Championship winner Smooth Fancy (Collision x Flash Fancy).

Their dam, Sionara Baby only has one other litter on file, whelped in March 2011 by Premier Fantasy* which produced, Iron Man, Kaytown Lad, Premier Assassin, Premier Event, Premier Series, Reanimation, Sam’s Sionara, Sionara Milly and Vintage Burgundy, with all but Sionara Milly, winning races, and she only had six starts for three placings.

She has one previous litter on file, two dogs and two bitches whelped in January 2014 and with seven bitches in this litter I am sure there will be plenty of interest from prospective buyers with future breeding in mind. 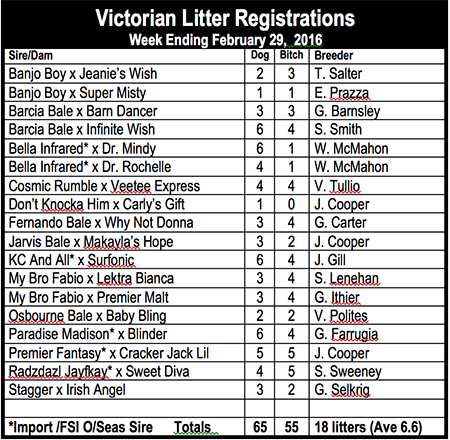 TURNING our attention to the Victorian Litter Registrations list for the week ending February 29, our first litter is one of eight pups by the 2010 Golden Easter Egg winner Cosmic Rumble (April 2007 Spiral Nikita x Spiritual Rumble).

Veetee Express is from a 100% winning litter, which included, Greysynd Chill. Greysynd Cool, Greysynd Jet, Keep One, Stay Warm and Total Confusion, with their dam also producing winners from her three other litters, whelped in February 2010 by El Galo, December 2011 by El Grand Senor and April 2013 by Bit Chili.

Jennifer has it all

WOODSIDE breeder, Jennifer Gill has our next litter for review which has 10 pups, by the highly rated US sire KC And All (October 2006 Gable Dodge x KC Did It Best).

She is from a very good litter, which included, Dozen Oysters, Fear Blue Size, Shakeby, Walk With Faith and the prolific winner Whatta Good Size, with their dam, Surf Queen, also producing good winners from her other litters, by Brett Lee, Head Bound*, two litters by Knocka Norris, (one of which produced 2012 Golden Easter Egg winner, Don’t Knocka Him) and Pure Octane.

His dam, Paradise Alanna has produced winners from each of her seven litters, by Ballymac Maeve, Crash, two by Head Bound, two by Hondo Black, and Royal Impact, with more than 30 individual winners winning more than 200 races.

What a Cracker litter

She is from a 100% winning litter, which included, Dakka Jack, Ditzy Lea, Five Percent, Hoover Jack, Jack’s Teddy, Lil’s Dad’s Girl and Mr Fidget, with their dam also producing good winners from both of her other litters, whelped in December 2011 by Mogambo and July 2013 by Magic Sprite.

She has one previous litter on file, three dogs and four bitches, whelped in February 2015, by Cosmic Rumble who will be worth keeping a lookout for in the second half of this year.

OUR final litter for review this week is one of nine pups by the highly rated US sire, Razldazl Jayfkay (November 2008 Kinloch Brae* x Razldazl Pearl) whose sire Kinloch Brae* has been an outstanding success here over the past 12 months, highlighted by the win of Moreira (September 2013 x Donna Ricca) in last Saturday night’s Golden Easter Egg final at Wentworth Park.

THIS week I have introduced a new segment, aimed at trying to find you a winner, looking for well bred young greyhounds who are likely to win races on Melbourne city tracks.

The first is Pee Cripps (July 2014 Banjo Boy x Elusive Lomar), trained by Jason Sharp for Leigh Mitchell, who has his foot on the till after two placings from his first four starts.

He followed his first up fourth fourth over 390m at Warrnambool with a fall over 450m at Ballarat, before finishing third over 410m at Horsham on March 22, then stepping up to 515m at Sandown on March 27 from box eight where he finished second, beaten 1.13 lengths by Shanlyn George who recorded 30.11 and he is now ready to win.

Our other pup to watch, is Goldenpaw Glory (May 2014 Barcia Bale x Golden Lemon) who is trained by Jeff Britton for the Golden Paw Syndicate.

He too has had four starts and been placed twice, finishing third at his first start over 460m at Geelong, followed by a fourth there the following week, before stepping up to 515m at Sandown on March 20 where he again finished fourth, then on March 27 he finished third, beaten by 11 lengths in the race won by the Robert Britton, Helen Ivers owned, True Value who recorded 29.53 winning by nine lengths.

Forget the margin when you assess his form next start as he is improving with each start and once he gains a bit more confidence I am sure he will be on the winner’s list.