He was from a good litter which included Comeawaywithme, Mickos Army, Nifty County, Soul Brother, Tolerton Lad, White Hill and Yobbo, with his dam, Nifty Niamh also producing some very good winners from both of her other litters, whelped in April 2003 by Larkhill Jo and July 2004 by Climate Control.

Worth noting that nine of his greyhound-data.com top 20 rated offspring (from almost 5000 pups named) were whelped in Australia, so there is no doubt about the bloodlines being successful here and also that his top rated son, Fear Zafonic* is now standing at stud here. 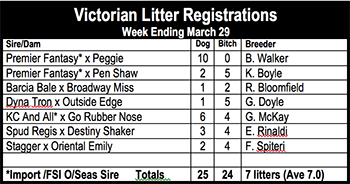 Premier Fantasy* passed away late last year and I am not sure if there any straws of his left here in Australia, or how many there are worldwide for that matter. But it is worth noting we have five sires from his top 20 rated offspring standing at stud here in Australia and I also noticed Farloe Blitz* on that list, who has sired winners here from limited opportunities. Then we also have Hurricane Luke, Leeroy Rocker, Premier Boloney, Premier Style, Shifty Sticka and Tommy Brislane standing here. (Apologies if I have missed any, I am sure someone will let me know).

Peggie, is from a litter of seven named, which included, Cambridge, Dodge The Bill, Magic Dream, Magic Flyer, Raghall and Sweet Latte, with their dam having six other named offspring on file from two litters, whelped in June 2013 by Fear Zafonic* and February 2014 by Slater.

She has one previous litter on file, three dogs and two bitches, whelped in March 2015, by Barcia Bale.

She is from a handy litter which included, Gavdashian, King Wolf, Praha, Skyla’s Star, Tallinn and Vinius, with their dam, Star Diva, also having good winners on file from both of her other litters, whelped in February 2009 by Return The King (which included the successful track bitch, now proven producer Come On Luann) and February 2011 by Dyna Lachlan.

She is from a litter of 11 named, which included, Athena Goddess, Carmine Ozzie, Evanscent, Go Prom Queen, Holding Sway, She Wants Me, Telling You, Tempted, West On Xavier and West On Ziggy.

Their dam, Casey’s Angel has a total of 50 named offspring on file, with six other litters, by Bekim Bale, Brett Lee, Collide, Collision, Smooth Fancy and Where’s Pedro.

Amongst her most successful offspring to date, are All Strung Out, Anything Less, Yesterday’s Wine, Miss Bel Air, Gone To Heaven, Living Proof, Waymore’s Blues, Bad Company, Never Ask, Telling You, Miss Betsy, Someday Lady and West On Angel.

According to my breeding records she has one previous litter on file, six dogs and three bitches, whelped in April 2015, by Jarvis Bale.

Their dam, Greys Destiny*, also has winners on file from her two other litters, whelped in June 2011 by another Australian Cup winner, Velocette, followed by an August 2012 litter by International stud success, Brett Lee.

She has one previous litter on file, with four dogs and four bitches, whelped in May 2014 with six named to date and one winner, Destini Tenor, although three of the others have placings at the time of writing.

The two other litters on this week’s Victorian list are, one dog and two bitches by Barcia Bale x Broadway Miss (Mogambo x Transmit) registered by Roger Bloomfield, then two dogs and four bitches, registered by Frank Spiteri, by Stagger x Oriental Emily.

DURING the process of compiling this week’s litter registration information from Victoria, several anomalies were found between the Litter Registrations list and Fasttrack’s information on the litters for each brood bitch.

The different information comes in the number of dogs and bitches in each litter, e.g. the Litter Registrations list for the first litter had 0 dogs and 10 bitches, which was corrected in fasttrack as 10 dogs and 0 bitches, then the same reversal in another of the litters which I corrected.

If you see something in the Litter Registrations list you don’t agree with, or know to be wrong, please let me know. [email protected] 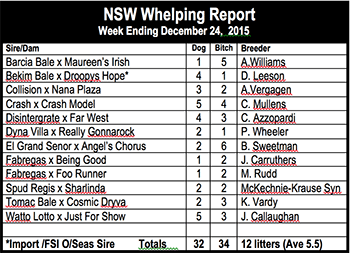 She is from a litter of four named, which included, Feel The Chill, She’s In Vogue and Top Quarter, with their dam’s only two other named offspring, Irish Dance and Smiles A lot, being whelped in October 2012, by Fear Zafonic*.

Droopys Hope is from an outstanding litter, which included, Aero Lillie, Cronody Sophie, Droopys Charity, Droopys Harris and Droopys Xavier, who between them, won more than 80 races, with Droopys Hope racing 37 times for 14 wins and 17 placings, racing for the last time in April 2012.

Their dam, Droopys Darjina also has winners on file from each of her other litters, by College Causeway*, Mall Brandy* and Westmead Hawk.

Crash, whose breeding career has been in Ireland, is the sire of the 2010 English Derby winner Bandicoot Tipoki, and was himself the world 480m record holder (Horsham 26.88). He is from an outstanding litter, from a breeding point of view, his line including Carnage, Crystal Hill, Dazzling Jet, Melbourne Cup winner Hallucinate, Los Caballos, Steffi Grace, Vilasanti, and champion sire Where’s Pedro.

Their dam, Elusive Rebel (Bobniak x Secret Bride) also produced winners from each of her five other litters, a second litter by Brett Lee, and litters by Collision, Elite State, Spiral Nikita* and Token Prince, with a number of successful stud dogs and brood bitches in her record.

With the pedigree highlights of this litter going on forever, it is also worth looking at the breeding of Australian bred sire Barrantes (Curryhills Brute* x Bush Balad) whose dam is by Brother Fox from the 1987 Australian Cup winner, Drop Of Wine (Temlee x Leeander Mist (Gabriel Mist* x Leeander Lass).

Prospective buyers with future breeding in mind could not do any better than a bitch from this litter, that is if any are for sale, they would make a great foundation brood bitch to start your own breeding line with.

According to my breeding records she has one previous litter on file, with five dogs and two bitches, whelped in January 2015 by Golden Easter Egg winner, now very successful sire, Cosmic Rumble.

NEXT we have a very well bred litter of eight pups, by Melbourne Cup winner, El Grand Senor (April 2008 Where’s Pedro x Elgrando Gold), with the pedigree of these well bred youngsters having already been the subject of some detailed discussion this week, and yet another example of the old saying ‘the cream always rises to the top’, which a lot of today’s younger generation might not understand.

Angel’s Chorus is from a very good litter of five named, which included All Strung Out, Anything Less, Tulare Dust and Yesterday’s Wine, with their dam’s other litters having already been discussed this week.

This really is a beautifully bred litter, Benjamin, and in addition to the pedigree and the fact the dam was lightly raced, I like the dam’s win and overall strike rate, with five wins over the tricky 530m, which finds a lot of dogs out over the last ten metres, and the fact she also won over 642m.

She is from a litter which included Cardwell, Forward Pass, Just A Show, Just Like Tina and Photo Bomber, with their dam also having winners on file from each of her three other litters, whelped in November 2011 by Made To Size, August 2013 by Head Bound* and May 2014 by Made To Size again.

From the mailbag ([email protected]) 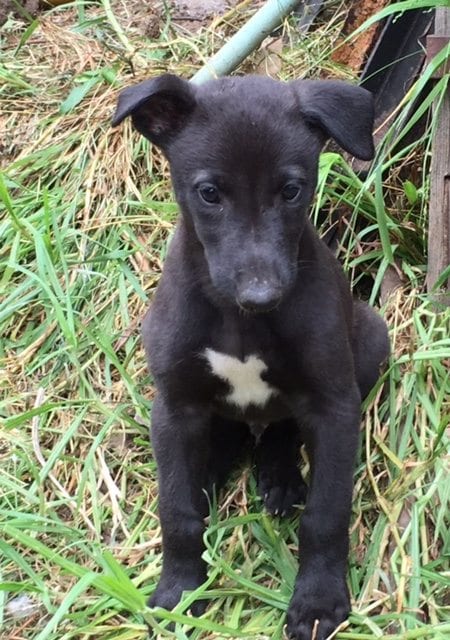 Their dam, Ramblin’ Ruby also has winners on file from both of her other litters, whelped in December 2010 and April 2013 by Where’s Pedro.

Loren said in her email that it was the success of the April 2013 litter by Where’s Pedro, which included Winsome Amanda, Winsome Bluey, Winsome Dan, Winsome Jacko, Winsome Jenny, Winsome Mission and Winsome Warrior who have won more than 50 races between them that led to the choice of El Grand Senor as the sire for this Winsome Courtney litter.

Winsome Courtney raced 37 times for four wins and six placings, winning twice over 520m at Dapto, and also over 520m at Wentworth Park (30.27) and 630m at Nowra (37.53) and it is worth noting that some of the pups from the litter will be for sale after registration and microchipping etc, around the end of May, or early June.

Thanks Loren for sharing the details of the litter for us and especially for the great photos you sent with the email, and as someone who has tried to hundreds of time over the years to get a good shot of greyhound pups, I can tell you these are great.

DETAILS of stud services registered with GRNSW for the month of December 2015 have been released, and show that Barcia Bale and Fabregas were the most popular sires with breeders for the month with nine services each, followed by Dyna Double One and My Bro Fabio with six each, Banjo Boy, Dyna Villa, Fernando Bale, Jagger Swagger and Magic Sprite with four each, Cosmic Rumble and Kiowa Mon Manny* with three each, then El Grand Senor, Goodesy, Keybow, Lochinvar Marlow, Paddy Whacker*, Shakey Jakey, Spring Gun and Where’s Pedro, with two each, completing the list of sires with dual services for the month.

Looking at the all important final full year figures for the whole of 2015, Fabregas tops the list with 86 services, followed by Barcia Bale with 73, Cosmic Rumble 51, Spring Gun 40, My Bro Fabio 32, Shakey Jakey 28, Banjo Boy 26, Magic Sprite 22, El Grand Senor and Lochinvar Marlow 18 each, Collision 15, Glen Gallon 13, Cape Hawke, Fernando Bale, Jagger Swagger and Kiowa Mon Manny* with 11 each, then Djays Octane*, Don’t Knocka Him, Dyna Tron and Tomac Bale with 10 each, completing the list of all sires in double figures.

Let us now look at the full list of all sires with services registered in NSW for the full 12 months of 2015, in alphabetical order, with the two figures representing their services in December then the full year.

Looking back to 2014, briefly, the top 10 most popular sires in NSW for the full year were, Cosmic Rumble with 81 services, Barcia Bale 79, Fabregas and Swift Fancy 76 each, Spring Gun 64, Magic Sprite 56, Lochinvar Marlow 44, Shakey Jakey 46, Cape Hawke and Collision 33 each and El Grand Senor 31.

OUR first one to follow this week is the beautifully bred, fawn dog, Whodat Bangin’ (May 2014 Don’t Knocka Him x Shanlyn Rosey) who finished fifth from box 3 at his first start at Sandown (SAP) on April 17, beaten 15 lengths by Kimber Lodge (29.81) before finishing fifth again, from box one at Sandown SAP on April 24 behind It’s A Buzz (29.60).

Raced by the Whodat Syndicate and trained for them at Tooradin by Amy Laterboom, he’s still got a bit to learn but he is certainly bred to be far better than he’s shown us to date and I’m betting on him improving very shortly.

EDDIE EAGLE (Black Dog, September 2014 Barcia Bale x Lara’s Rock) finished sixth at Sandown (SAP at his first race start on April 24, beaten 13 lengths in the race won by Big Cold Burst (29.84). Raced and trained at Little River by James Psaila, he is sure to have benefited by that run and will improve shortly.