Melkate is from a litter which included Broadway Hit, Electric Bullet, Flying Ash, Good As Done, Jordy Express and Optimus, with their dam, Kowem Girl having winners on file from each of her three other litters, whelped in April 2010 by Bit Chili, August 2012 by Mogambo and her own May 2013 litter by Kinloch Brae* which included Don’t Tell Fil, Entreaty, Nesta No Cry, Parsley Boy, Sudden Outburst and Thank You. 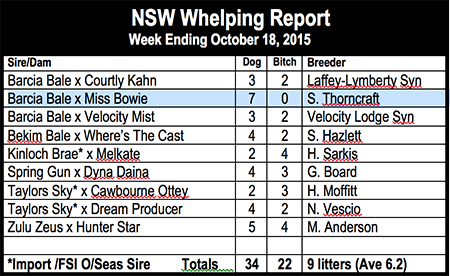 NEXT we have a litter of seven pups by Spring Gun (June 2009 Bombastic Shiraz x Ready For Rain) registered by Greg Board, from Orange.

She is from a litter which included Dyna Chante, Dyna Erwin, Dyna Garth, Dyna Gemma, Dyna Hakon, Dyna Ishaan and Dyna Keaton, with their dam, Serene Bale, also producing winners from her three other litters, whelped in March 2008 by Ahane Lad*, July 2009 by Bartrim Bale and November 2011 by Lonesome Cry.

Certainly plenty to like about her pedigree and her dam’s good record as a producer, but I also like her strong record on the track over 600m and 731m at Angle Park.

Reach for the Sky*

TWO litters on the list this week by the beautifully bred, 2011 English Derby winner Taylors Sky* (March 2009 Westmead Hawk x Rising Angel) who is making a name for himself here as a sire from limited opportunities to date.

His sire Westmead Hawk* (May 2003 Sonic Flight x Mega Delight) won the English Derby in 2005 and 2006 along with the Produce Stakes, ran second in the Scottish Derby and was a finalist in the 2005 Irish Derby and it is worth noting his dam, Mega Delight is by the Australian bred sire, Smooth Rumble (Ginger Follow Through) from the well bred bitch, Knockeevan Joy* (Mustang Jack x Rubys Bridge).

Their dam, Cawbourne Fraz was a prolific producer, with 38 names offspring on file from seven litters, with her other six litters by Bekim Bale, Bit Chili, Bond, Eiffella, Hallucinate and Surf Lorian.

She is from a litter which included Amber Blitz, Deadly Producer, Dream It, Lunar Tom and Miss Kia Ora, with their dam’s only other named offspring on file, Bingo Sally, Mi Tensile, My Names Sandy (2 wins WP this year to date) and Secret Spark, whelped in November 2013 by Cape Hawke.

Dream Producer has one previous one litter on file, five dogs and five bitches, whelped in November 2014 by Lochinvar Marlow, and bred by Heathcote (Vic) breeder Michael Chilcott.

Hunter Star is from a litter of six named which included, Don’t Knocker, Points Table, Sir Honeybadger, Sir Norris and Won On Points, with their dam’s two other litters, whelped in February 2008 by Elite State and March 2012 by Cosmic Chief both producing winners.

Hunter Star only raced twice, striking trouble times, falling at her first start over 515m at Gosford at her first start, in January then not racing until September that year when she finished last over 565m at Maitland and was immediately retired and kept for breeding, with this being her first litter. 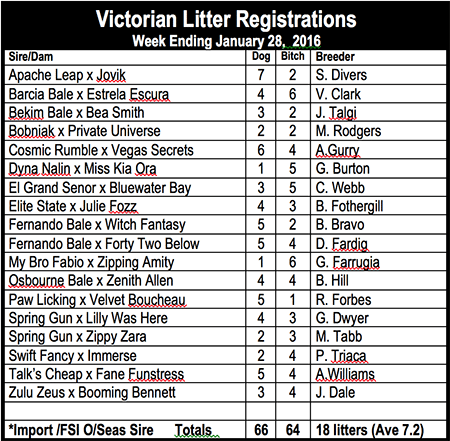 She has one previous litter on file, five dogs and five bitches, whelped in January 2015 by the US sire Djays Octane*.

Harrisdale breeder, Damon Fardig, has the first of his two litters on this week’s list, which is five dogs and four bitches from the very well bred bitch, Forty Two Below (June 2008 Where’s Pedro x Will You Behave) whose dam is by Token Prince x Oh Behave (Big Gimger Boy x Hunter Tylo).

She is from a litter which included, Black Velveteen, Feijoa, Ricciardo and Rock Pool, with their dam also producing winners from her three other litters, whelped in March 2009 by Premier Fantasy*, January 2010 by Hallucinate and November 2010 by Collision.

Bred by Paul Westerveld, Witch Fantasy is from a litter which included Cover Girl, Molly Molly, Our Coralie, Premier Magic and Rush Hour, with their dam, Witch Magic, also producing winners from her four other litters, whelped in April 2006 by Larkhill Jo*, October 2007 by Pure Octane, August 2008 by Hallucinate and January 2011 by Velocette.

She has three previous litters on file, the first of which was four dogs and five bitches whelped in March 2012 by Bartrim Bale, bred by her breeder Paul Westerveld, before transferring to Brett Bravo where she whelped a March 2014 litter of five dogs and two bitches by Brett Lee, then a December 2014 litter of three dogs and seven bitches by Turanza Bale, before this litter, so she certainly has some well bred pups on the ground.

Lilly Was Here is from a litter of five named which included, Ava Rose, Cetane, Light Years Away and Mekong Moon, with their dam also producing winners from her two other litters with named offspring, whelped in May 2011 by Premier Fantasy* and December 2012 by Collide.

Zippy Zara is from a litter of five named, which included Dalmation Ally, Dalmation Ally, Maccaboy and Ten Doeschate, with their dam having only three other named offspring, Bahgallah Girl, Serious Token and Token Ali, all whelped in May 2009 by Token Charlie.

On the track, she only raced three times for a quail win over 311m at Cranbourne (18.32, B 17.94) before finishing sixth in the final won by Twisted Kaos (17.94) then finished fifth over 330m at Temora in September 2013 before being retired and kept for breeding, with this being her first litter.

STUD service figures released by GRV for the month of November show that Stagger was the most popular sire with breeders for the month, with five services, followed by Nitro Burst with four, Barcia Bale with three, then Bella Infrared*, Bookkeeper, Cosmic Rumble, Jarvis Bale, Kinloch Brae*, Kiowa Panther*, Paw Licking and Radley Bale, with two each completing the list of those with multiple services, in a month where there were a total of 58 services registered.

Looking at the year to date list, for the 11 months to the end of November, not a lot between Barcia Bale with 38 and Cosmic Rumble with 31, followed by Fabregas with 24, Nolen 20, Banjo Boy 18, Bekim Bale 15, Nitro Burst 11, and My Bro Fabio, Premier Boloney and Spring Gun, all with 10 each completing the list of those in double figures.

Let us now look at the full list of all sires with services registered in Victoria in the 11 months to the end of November, in alphabetical order, with the two figures for each sire representing their services in November then the 11 months, January to end November.

NEXT week, we will have the Metropolitan Sires lists for both NSW and Victoria for the two months to the end of February, along with our normal review of litters from both states.

I have been asked why I never feature litters bred in Queensland, South Australia, West Australia or Tasmania, and the answer is simple, we don’t get the information from the controlling bodies in the other states as litters are registered like we do from GRNSW and GRV.

If breeders in any of the other states want to email me details of their litters as they are whelped, or as they register them then they will be considered for publication.