She is from a handy litter which included Avalicious, De Ja Moo, Just Bliss, Modest Ruler and Solitary Bloke, with their dam also producing winners from each of her three other litters, whelped in November 2011 by High Earner, March 2013 by Aston Galilee and November 2013 by Cosmic Chief.

Shelbourne Aston is by the Australian bred sire Just The Best (Credibility x Flying Amy) whose dam is by Amerigo Man x Tenthill Flyer (Chariot Supreme x National Queen) and it is interesting how many breeders these days are looking at internationally based sires, who are by Australian bred sires.

He was from a very good litter which included Diver, Greenacre Ben, Musical Moment, Shelbourne Capri, Shelbourne Merc, Shelbourne Tiger, Shelbourne Bonus and Shelbourne Park who according to available results records, won more than 100 races between them.

Their dam, the beautifully bred, Queen Survivor was a prolific producer with 54 named offspring from eight litters, producing winners from each of her other litters, by Boherduff Light, Brett Lee, Come On Ranger, Head Honcho, Roanokee Shanless Park and Spiral Nikita with almost 20 individual winners of more than 10 races, including 10 who won more than 20 races.

Make Do’s sire, Knocka Norris (February 2006 Elite State x Oriental Angel) has Just The Best on the second line of his pedigree so this litter has a double cross of the outstanding Credibility x Flying Amy bloodlines, and I would suggest that any prospective buyers looking for a foundation bitch for their own line, should have a very close look at the five bitches in this litter, that is if any are going to be available. 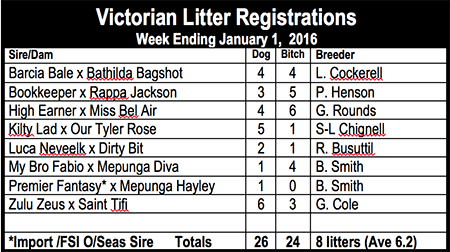 Gold Heritage is from a handy litter of four named, which included, Classy Heritage, Supreme Heritage and Texas Heritage with their dam also having winners on file from each of her three other litters, by Collision, Cosmic Rumble and Fabregas, but she hasn’t been a prolific producer, with just 11 named offspring from four litters to date.

On the track, she raced 36 times for 13 wins and nine placings and in addition to her Group 2 Cranbourne Cup win, she also finished second in the Group 1 Perth Cup and has a litter of one dog and two bitches on file, whelped in January 2014, by Oaks Road.

NEXT we have a litter of nine pups by the beautifully bred, but largely under-rated stud prospect Bookkeeper (February 2011 Bombastic Shiraz x Smashing Amy) whose dam is by Collide x Amy Grace (Bobniak x Flying Amy).

WEST MELTON breeder, Brian Treloar, has our next litter for review, nine pups, registered for the Treloar Family syndicate, by Cosmic Rumble (April 2007 Spiral Nikita x Spiritual Rumble), which should create plenty of interest from prospective buyers with future breeding in mind.

She has two named offspring on file, Cindy Lass and Kim Kadash, from a litter of two dogs and five bitches, whelped in July 2014 by Bekim Bale.

NEXT we have a nice litter of nine pups by the successful Irish imported sire, Fear Zafonic* (October 2006 Premier Fantasy x Farloe Oyster) who has thrown some good winners here, from limited opportunities.

She is from an all winning litter of three named, which included Here After and Relampago, with their dam also having winners from each of her other litters on file, by Bond, Hallucinate (twice) and Surf Lorian.

She has winners on file from her first litter, Golden Fang, Ima Big Unit, Ima Lonely Girl, Ma Ma Marty and Mystique Molly, then she has a litter of four dogs and five bitches on file, whelped in June 2014 by Lochinvar Marlow, and has now been retired to the couch, living a life of luxury with new owner, Joan Grounds.

Come On Luann is from a handy litter, which included, Black Tequila, Dynamic Diva, Expression Eyes, Into The Mist, Larabella, Leigh, Liege, Pucka Diva and Radiant, with their dam producing winners from both of her other litters on file, whelped in February 2011 by Dyna Lachlan and March 2012 by Where’s Pedro.

Success in the breeding barn was immediate, with her first litter, whelped in November 2012 by Premier Fantasy* producing, Ballerino, Come On Fantasy, Kuranda Lass, Premier Hawk and Trip To Cairns, then a January 2014 litter by Westmead Hawk* produced Burnt Ember, Cocoa, Come On Juliet, Hawk Ember and Pink Shoelaces.

She has since whelped a litter of three dogs and five bitches, born May 2015, by Cosmic Rumble, and I would suggest that taking into account her impressive record on the track and early success as a brood bitch, her daughters should be well sought after as breeding propositions.

OUR final litter for review this week from the Victorian list is one of eight pups by the 2008 Group 1 Vic Peters Classic, and Group 1 Temlee winner, Nitro Burst (October 2006 Bombastic Shiraz x Hotburst) whose multiple group 1 producing dam is by Hotshot x Outburst (Denver x Nicole Cruise) and worth recalling, Nicole Cruise is by Grove Whisper* x Gee Whiz.

Their dam, Sweet Fancy’s first litter was whelped back in January 2009, by Where’s Pedro and included the outstanding sprinter, Fancy Dean, and after her first Brett Lee litter, she produced some good winners from a March 2012 litter by Larkhill Ko*, before returning to Brett Lee for another very good litter, whelped in January 2013, then her final litter, whelped in December 2013 by Cosmic Chief with the three named all winning.

Her first litter, whelped in January 2014, by Kinloch Brae* produced two dog pups, one of which is the promising sprinter, Shiny New, who at the time of writing had raced 29 times for eight wins and nine placings, then she whelped a January 2015 litter of two dogs and five bitches, by Jagger Swagger. 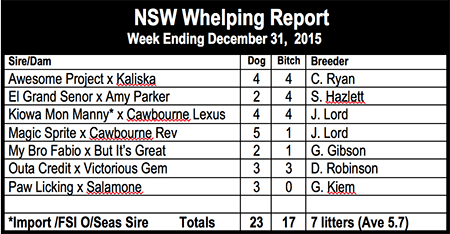 Kaliska is from a very good litter, which included, Booster Valve, Can Can Hurrican, Folk Tails, Hurricane Shiraz, Jamoos Rayne, Locksmith, with their dam’s only other litter on file, whelped in June 2014, by Magic Sprite, producing Bushman’s Faith, Larrikan’s Hat, Magic Skyline and No Apologies.

According to my breeding records she has one previous litter on file, three dogs and one bitch, whelped in January 2015, by Zulu Zeus.

Amy Parker is from a handy litter which included Alumy Bill, Hot Pic, Hot Replica, Joyous Dee, Raylan Givens, Tauvasa Shek and Wayward One, with their dam, Thermal Image, also producing winners from her only other litter on file, whelped in September 2013 by Magic Sprite.

Certainly plenty to like about the pedigree of these well bred youngsters, Stuart, and I do like the strong staying form of the dam, Amy Parker, so good luck with the litter.

The litter has four dogs and four bitches, which are from the beautifully bred bitch (Cawbourne Lexus (January 2012 Dyna Lachlan x American Spot) whose dam is by the US sire Molotov* x Elite Monelli (Elite State x Elusive Rebel), giving the litter a double cross of US bloodlines.

Cawbourne Lexus is from a litter which included Cawbourne Saleen, Caesar To Excel, Cawbourne Cobra, Cawbourn Jag, Cawbourne Porshe, Cawbourne Rev, (dam of the next litter), Cawbourne Thunda and Cawbourne Whip), with their dam also producing winners from her other litters, by Brett Lee, whelped in February 2011, and Kinloch Brae*, whelped in November 2013.

She has three named offspring from her first litter, whelped in July 2014 by Blazin Wildfire*, who have all won races.

OUR final litter for review from the NSW list this week is one with six pups, by the Classic winner and under-rated stud prsspect, Outa Credit (November 2007 Surf Lorian x Una’s Pride), who won the 2009 Lismore Classic, finished second in the 2010 Group 1 National Derby and Group 1 Sale Cup and was a finalist in the 2010 Melbourne Cup.

Victorious Gem is from a litter of four named which included Ace Power, Biffon Racer and Tarawi Belle, with their dam also producing winners from six other named offspring from litters by Bit Chili, Bombastic Shiraz and Nitro Burst. 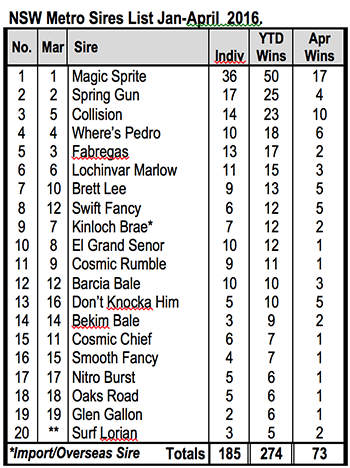 MAGIC SPRITE (March 2008 Brett Lee x Glamorous) increased his lead on the NSW Metropolitan sires list in April after his offspring won 17 races at Wentworth Park for the month, followed by Collision with 10 wins and Where’s Pedro with six wins.

Magic Sprite is now at the top of the list with 50 wins from 36 individual winners and has a huge lead over second placed Spring Gun who has 25 wins, followed by Collision with 23 wins, Where’s Pedro with 18 wins and Fabregas with 17 wins, completing the top five.

Winners for the top three April metropolitan sires at Wentworth Park were as follows:

NEXT WEEK we will have the Victorian Metropolitan Sires list for the four months to the end of April, along with our usual litter reviews, a mailbag email from South Australia, and some more Bred To Win dogs to follow.