THIS week’s review of litters selected from the Victorian Litter Registrations list for the week ending May 25, begins with a nice litter of 12 pups by the international stud success, College Causeway* (August 2006 Go Wild Teddy x College Tina).

She is from a litter of only two named, which included Where’s He Shall, with their dam’s only other litter, whelped in March 2012, by Talk’s Cheap, producing Lone Survivor, Cruiser’s Sol, Dream Collector, Exquisitus, Miss Society, My Girl Honey, Peregon Flyer and Shal She Rock.

She has two previous litters on file, the first, whelped in December 2013, by Dyna Lachlan, produced Pacific Cruiser, Pacific Dreamer, Pacific Gem, Pacific Impulse, Pacific Magic, Pacific Reed and Pacific Secret, who have all won races, then she whelped a litter of five dogs and seven bitches, in September 2014, by Talk’s Cheap.

Given their strong pedigree, and the success of the dam’s first litter, prospective buyers with future breeding in mind are sure to give plenty of attention to these well bred youngsters. 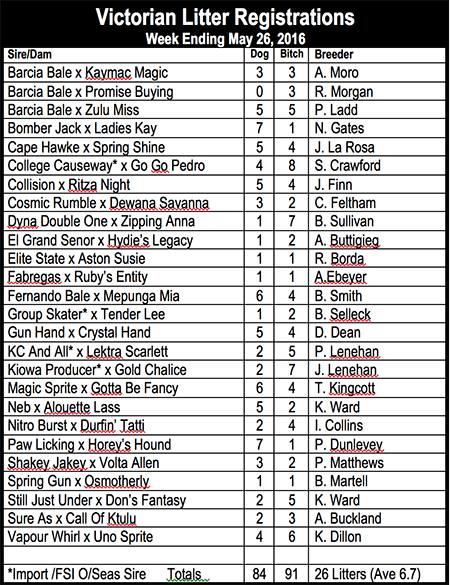 Ritza Night is from a litter which included Midnight Snapper, Ritza Flare, Ritza Franky, Ritza Mitza, Ritza Ryder and Wild Midnight, with their dam also producing winners from her four other litters, whelped in August 2010 by Brett Lee, November 2011 by Bombastic Shiraz, February 2013 by Nitro Burst and June 2014 by Bella Infrared*.

She has winners on file from her first two litters, whelped in November 2012 by Fabregas and January 2014 by Turanza Bale, then has a litter of two dogs and five bitches whelped in October 2014, by Bombastic Shiraz and a litter of one dog and four bitches, whelped in June 2015 by Kiowa Mon Manny*.

She is from a good litter which included, Gold Kate, Gold Lass, Gold Max, Gold Town*, John And Jayjay and Pop’s Max, with their dam also producing winners from her two other litters, whelped in July 2009 by Bombastic Shiraz and February 2013 by Fear Zafonic*.

She is a proven producer, with winners from her first litter, whelped in November 2013 by Fear Zafonic* which included Blue Boy, Gold Bro, Gold Cup, Gold Magic, Golden Swan and Gwen’s Pick, then she has a March 2015 litter of three dogs and two bitches on file, by Cosmic Rumble.

She is from a very good litter of seven named, Fancy Choice, Fancy Tip, Fine And Fancy, Gold Trump, Just As Fancy and Tentens, who all won races, with their dam also producing winners from each of her six other litters, by Black Enforcer, Bombastic Shiraz, Collision (two litters) Kinloch Brae* and Spring Gun, which have resulting in a number of her offspring, both male and female, producing winners at stud.

She has one previous litter of her own on file, whelped in October 2013, by Collision, with six named, Gotta Be Black, Myrniong Angel, Myrniong Fancy, Myrniong Girl, Myrniong Plow and Myrniong Star, who have all won races.

OUR final litter for review from the Victorian list this week is a litter of 10 pups, registered by Kolora breeder, Kevin Dillon, by Vapour Whirl (May 2003 Ashigga x Broad Band).

She is from a litter of four named, which included Solo Diva, Sunshine Diva and Sweet Diva, with their dam’s only other litter on file, also four named, whelped in August 2014 by Cosmic Chief, producing Jesterday, Seven Two, Son Of Irod and Who’s Irod.

Worth noting in her form line, she was also placed nine times over 525m at The Meadows, and with a little bit more luck in running her form could have looked a lot better than it does. 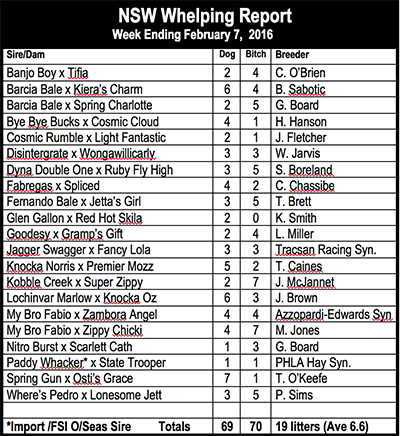 Keira’s Charm is from a litter by the 2008 Melbourne Cup winner, Surgeon, which included Bully Bouncer, She’s A Delicate, She’s Slick, Special Surgeon, Sweet Beth, Swift Amy and Tsunami Joe, with their dam having winners on file from her two other litters, whelped in October 2008 by Collision and September 2010 by Two Up Larry.

She is from a handy litter, which included Kwazulu Icon, Luzaka Icon, Plumb Quik, Spring Amanda and Zola Icon, with their dam also having winners on file from each of her two other litters, whelped in September 2011 by Go Wild Teddy, with four named all winning, then November 2012 by Spring Gun, with 11 named, including the prolific winner, Bangor Blaze.

Jetta’s Girl is from a litter of 10 named, which included Black Book Bob, Catch The Lilly, Debt Overload, Lettuce Catch Up, Pearl Za Zinger, Pipeline Pro, Queen Lorian, Rustic Sunrise and Thunder Rocks, with their dam also having winners on file from a July 2011 litter by Collision and one named from a March 2014 litter by El Grand Señor.

According to my breeding records, she has one previous litter on file, three dogs and one bitch, whelped in January 2015 by Glen Gallon.

The two dogs and seven bitches in the litter are from the very well bred bitch, Super Zippy (September 2010 Collide x Nippy As), whose dam is by Craigie Whistler* x Zippy Xena (Bobniak x Flying Amy).

She is from a handy litter which included All My Life, Miss Missile, Seinfeld and Shintaro Katana, with their dam’s only other litter on file, whelped in November 2009 by Superman, producing Black Spice, Glenferrie Lass, Kennel Of Roses, prolific winner Paper Chaser, Rock Man, Super Hirdy, Super Junior and Super Lady.

NEXT we have a nice litter of eight pups, registered by Cootamundra breeder, Thelma O’Keefe, by Spring Gun (June 2009 Bombastic Shiraz x Ready For Rain).

The seven dogs and one bitch in the litter are from the well bred bitch, Osti’s Grace (December 2009 Hallucinate x Special Osti), whose dam is by Placard x Elite Osti (Star Title x Enchanted Osti).

She is from one of her dam’s seven litters, which included Daniel Duncombe, Mr. Massey, Osti’s Ruby, Rock Magic and Terra Magic, with their dam producing winners from each of her six other litters, by Bit Chili, Bombastic Shiraz, Collision, Cosmic Rumble, Premier Fantasy* and Pure Octane, with a total of 39 named offspring.

She has three named offspring on file from her first litter, of three dogs and three bitches, whelped in January 2014, by Smooth Fancy, named, Daryl’s Desire, Donna’s Desire and Terry’s Desire, all early winners.

ILLABO breeder, Peter Sims, has our final litter for review this week from the NSW list, eight pups by the outstanding stud success, Where’s Pedro (April 2002 Brett Lee x Elusive Rebel), who sadly is no longer with us.

There are three dogs and five bitches in the litter, who are from the very well bred bitch, Lonesome Jett (April 2012 Lonesome Cry* x Seize The Moment), whose dam is by Awesome McLaren x Flashy Fool (Just The Best x Vesuvious).

She is from a litter of three named, which included Cry Harry and Velocity Melzon, with their dam also producing winners from both of her other litters, whelped in March 2011 by Bombastic Shiraz and March 2014 by Brett Lee.

STUD service registrations for the month of February, released by GRV showed 41 services registered from 28 different sires, with Barcia Bale and Fernando Bale the most popular sires with breeders for the month, with four services each, followed by Magic Sprite with three, then Banjo Boy, Dyna Double One, My Bro Fabio and Spud Regis, with two each completing the list of sires with multiple services.

Let us now look at the full list of all sires with services registered in Victoria in the first two months this year, in alphabetical order, with the two figures for each sire representing their February and combined January/February totals.

ALL roads lead to Wentworth Park on Saturday night for the running of the final of the Group 1 Peter Mosman Classic worth $75,000 to the winner.

The classic was first run at Harold Park in 1952 when won by Robin Buchanan, when the race was known as the Bi-Annual Classic, which remained the same until 1988 when the GBOTA renamed the race honoring legendary administrator, the late Peter Mosman.

Looking at this year’s race from a breeding perspective it is really interesting with seven different sires being represented and only Golden Easter Egg winner Cosmic Rumble having dual runners.

We recently had a feature profile on Buck Fever (December 2009 Brett Lee x Kiacatoo Pearl) the sire of Buck Forty (January 2014 Buck Fever x Fancy Jaffa), and now his son has a chance to give him his second Group 1 winner, after Bourbski Fever won the Group 1 Bold Trease at Sandown last year.

Drawn nicely in box two, I think Buck Forty will be in the race all the way and is good enough to go on and win, with El Magnifico drawn out wide and having to get across, the biggest danger, and Ritza Lenny who should have the run of the race for third.

Coursing is at Lang Lang this week where the second day of the two day meeting will see the conclusion of the Syl Doyle Puppy Championship ($3,695 to the winner, $1250 runner up and $295 semi finalists) the main feature on the program.

Some very talented young puppies have made their way to the last stages which will play out between, Sugar Hit Johnny, Dewana Express, Johnnie Red, Elram Girl, Nicky Dal and Delta Bad Hand.

The Gippsland Cup ($750 to the winner, $300 runner Up and $200 semi finalists) is down to the last eight, Onya Jatt, Why Not Barrell, Canya Keato, Bling Worthy, Why Not Mick, Amlin Mystique, Contemplate and Bring Sexy Back.

The first course starts at 10.00am, full canteen and bar facilities available, with supporting events dependent on entries, but it is sure to be a great day out.

HOOTER HARNETT (Black Dog, February 2014 Oaks Road x Mulberry Street). Lightly raced with 15 starts for six wins and three placings. Three wins from four starts, over 565m at Maitland, 700m at Bathurst and 731m at Gosford before stepping up in class when second from box 4 over 720m at Wentworth Park on June 18, behind Iona Muffin. That was only his second start at Wentworth Park and he looks an impressive type who is certain to win there shortly.

MAKO (Black Dog, June 2014 Barcia Bale x Glory Of Love). Nine starts for three wins and five placings. Four seconds in a row, Wentworth Park, Bulli and Wentworth Park including a heat of the Mosman Classic behind Sausage Sizzle, before being outclassed in the semi final won by Shima Song, Buck Forty and Reefton Treasure. Wait till he steps out in something easier shortly.