THIS week’s review of litters from the Victorian Litter Registrations list for the week ending August 3 starts with a beautifully bred litter of nine pups by champion sprinter Dyna Double One (March 2013 Barcia Bale x Crystin Bale), winner of four Group 1 finals, the 2015 Melbourne Cup, the 2015 Brisbane Cup, the 2016 Rookie Rebel and the 2016 Australian Cup.

Their dam, Audacious Elle has one other litter on file, with seven named, whelped in November 2014 by Collision which also produced some very handy winners.

Guru Doll is from a litter which included Bacardo, Boss, Kokoda Spirit, Mister Marshman and Star Doll, with their dam having six other named offspring on file from three litters, whelped in March 2012 by Bekim Bale, December 2012 by Fabregas and March 2014 by Collision.

She is already a proven producer from the seven named in her first litter, whelped in March 2014 by Dyna Tron, then she has a litter of six dogs and four bitches on file, whelped in December 2014, by Cosmic Rumble. 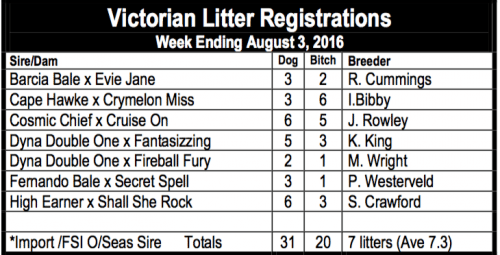 LARA breeder, Rose Geall, has a litter of six pups on the list this week by the recently crowned Victorian Greyhound Of The Year, Fernando Bale (March 2013 Kelsos Fusileer* x Chloe Allen).

The five dogs and one bitch in the litter are from the beautifully bred, Group 3 WA Oaks finalist and proven producer, Where’s Demonica (March 2009 Where’s Pedro x Demonica), whose dam is by Bombastic Shiraz x My Girl Ashlee (Awesome Assassin x Floodgate).

She is from a 100% winning litter of four named, which included Bubbly Brooke, Loveable Lyn and Plankton, with their dam also having winners on file from her two other 100% winning litters, whelped in January 2010 by El Galo and December 2012 by Bekim Bale, giving her a perfect record.

She has produced some very good winners from her first two litters, whelped in March 2013 by Westmead Osprey* and December 2013 by Milldean Panther*, then has a litter of three dogs and six bitches on file, whelped in February 2015 by Premier Fantasy*.

TWO litters on the list this week by dual Group 1 winning sire Kilty Lad (January 2009 Superman x Sisco Train), who is now standing at stud in Ireland, with early winners on the board from his first crop to race there.

She is from a litter of three named, which included Brent’s Girl and Destinee Saint, with their dam, Cosmic Goddess also producing winners from her five other litters, by Bombastic Shiraz (which included Cosmic Cooper), Brett Lee (which included Cosmic Brigid, Cosmic Chief, Cosmic Diva, Cosmic Planet and Cosmic Medusa), Collision, Hallucinate and Premier Fantasy* with a total of 38 named offspring from her six litters.

She is from a litter which included Aye Aye Captain, Zelemar Flash and Zelemar Knight, and worth noting she is a half sister to the proven sire Oaks Road (November 2008 Spiral Nikita* x Leprechaun Pace) and she has two previous litters on file, five bitches, by Cosmic Rumble, whelped in March 2013, then two dogs and five bitches, by Magic Sprite, whelped in November 2014.

RUSHWORTH breeders Peter and Shara Cullie have a nice litter of eight pups on the list week by the freakish, three time Group 1 winner, My Bro Fabio (March 2012 Turanza Bale x Flamenco), who raced 52 times for 26 wins and 14 placings, earning stakes of $478,575.

Shiraz Monelli is from a litter which included Cabernet Monelli, Gooney Monelli, Merlot Monelli, Moselle Monelli, Sherry Monelli and Viva Monelli, with their dam also producing winners from her four other litters, by Collision, Dyna Tron, Magic Sprite and Mogambo, with a total of 30 named offspring.

OUR final litter from the Victorian list this week, with the small list allowing us to review all seven litters, is one of seven pups by champion sire Where’s Pedro (April 2002 Brett Lee x Elusive Rebel).

Leprechaun Macey is from a litter of three named, which included Johnny Ritza and Quasi, with their dam, also producing winners from both of her other litters, whelped in March 2009 by Spiral Nikita* and January 2010 by Token Prince.

TURNING our attention to the NSW Whelping Report for the week ending April 23, where again we have a small list of only five litters, which also gives us the unusual opportunity to review every litter.

Redskin is from a litter of five named, which included Emily’s Hot, George’s Dream, Jovi and Power Trey, with their dam, She’s Hot also producing winners from her five other litters, by Dyna Lachlan, El Galo, Head Bound*, Pure Octane and Where’s Pedro.

She has some very good winners on file from her first three litters, whelped in November 2012 by El Grand Senor, June 2013 by Collision and August 2014 by Where’s Pedro, then has a litter on file of one dog and one bitch, whelped in March 2015 by Barcia Bale.

She is from a litter which included Bear Lezah, Don’t Pick Me, Eye Eye Sloy, Future Proof, Hot Hits, Mother Little, So Sorry and Viracocha, with their dam, Zilla, also producing winners from both of her other litters, whelped in September 2007, by Big Daddy Cool, which included the New Zealand champion, Little Mother, and December 2008 by Pure Octane.

She is already a proven producer, with winners from her first litter, with six named, whelped in September 2013 by Elite State, then she has a litter of three bitches, whelped in October 2014, by Take The Kitty.

She is from a litter of three named, which included Pearly and Devine Amrak, with their dam’s only other litter, whelped in June 2009, by Collision, also having only three named, Greysynd Pearl, Plenty Miss and Plenty Pearl.

She has one named offspring on file, Love You Forever from her August 2014 litter of three dogs and two bitches, by Tomac Bale.

Country Rebel is from a handy litter of nine named, which included Country Bell, Country Shark, Country Spot, Cyclone Country, Dark Country, Dynamic Hunter, Tiny Country and Ultimate Country, with their dam, Fawn Country only having two other named offspring on file, Alert Country and Ben’s Country, who were whelped in January 2011 by Thai Alert.

She has three named offspring, all good winners, Country Fox, Country Gun and Country Heat, from her first litter, whelped in November 2012 by Spring Gun, then she has a litter of three dogs and five bitches on file, whelped in January 2015, by Barcia Bale.

She is from a 100% winning litter, of six named, which included Fancy Kiwi, Fancy Lola, prolific winner, Fancy My Luck, Fancy Rick, Fancy Rover and We No Fancy.

STUD Service figures released by GRNSW for the month of April, showed champion sprinter Dyna Double One was the stand out sire for the month, with 10 services, followed by Barcia Bale and Febregas with six each, Hay Fergus and Magic Sprite with three each, then Bekim Bale, Don’t Knocka Him, Dyna Villa, El Grand Senor, Keybow, Kiowa Producer*, My Bro Fabio and Shoulders, with two each, completing the list of sires with multiple services.

Looking at the combined figures for January to April, Dyna Double One is on top with 28 services, followed by Barcia Bale with 18, Fabregas 17, Fernando Bale 11, Magic Sprite 10, Don’t Knocka Him 9, El Grand Senor 8, Swift Fancy 7, Dyna Villa 6, Bekim Bale and Kinloch Brae* five each, Collision, Cosmic Rumble, Kiowa Mon Manny* and My Bro Fabio with four each, Banjo Boy, Buck Fever, Hay Fergus, Keybow, Kiowa Producer*, Spring Gun, Sulzanti and Where’s Pedro with three each, then Brett Lee, Jarvis Bale, KC And All*, Oaks Road and Shoulders with two each completing the list of all sires with multiple services during the first four months this year.

BARON FESTINI (White & black dog, September 2014 Destini Fireball x Cloak Of Gold) Trained at Lethbridge by Janis Rinaldi. Fifth over 390 metres at Ballarat, fourth over 390 metres at Warrnambool and last over 460 metres at Geelong before last start third from box five, over 515 metres at Sandown (SAP) August 28, beaten 13 lengths in the race won by EXS And OHS who won by ten lengths (30.73). Improving with experience and will do better.

BLACK ECLIPSE (Black dog, February 2015 Barcia Bale x Bronelly Dancer). Trained by Tricia Curtain at Cranbourne South and was second, then last over 450 metres at Ballarat before sixth from box four over 515 metres at Sandown (SAP) on August 28, beaten 16 lengths in the race won by Electromagnetic, who ran 29.56 in a maiden heat. Never out of trouble and could improve with experience.

NEXT week we will have the NSW Metropolitan Sires list for the eight months to the end of August and our usual review of litters, from Victoria and New South Wales, along with any news that comes in through the Mailbag.

Got a question on any of our sires and brood bitch lists? Want to know individual winners for a sire? Or want to send us news on a litter you’ve just bred, or any greyhound racing related question, simply email me at [email protected]