Their dam, Miss Megastar, also produced winners from each of her three other litters, whelped in March 2006 by Token Prince, October 2006 by Big Daddy Cool and November 2011 by Where’s Pedro.

She has been a good producer already, with winners from her first three litters, whelped in September 2012 by Heston Bale, July 2013 by El Grand Senor and May 2014 by Kynan’s Express.

NEXT we have another beautifully bred litter of nine pups, registered by Pearcedale breeder, Shona Crawford, by High Earner (May 2007 Collision x Double Guess).

The six dogs and three bitches are from the very well bred, consistent stayer, Shall She Rock (March 2012 Talk’s Cheap x Shall She), whose dam is by November Fury x Trios Pinari (Fortified Speed* x Shy Flight).

She is from a handy litter, which included Lone Survivor, Cruiser’s Sol, Dream Collector, Exquisitus, Miss Society, My Girl Honey and Peregon Flyer, with their dam only having two other named offspring, Go Go Pedro and Where’s He Shall, who were whelped in October 2009 by Where’s Pedro. 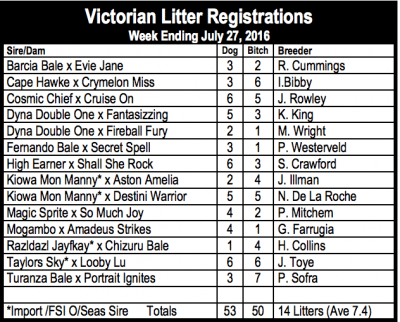 She is from a handy litter which included Aston Abira, Aston Aditi, Aston James, Aston Jobson, Aston Molly, Aston Red, Aston Susie and the very good producer Queen Of Cyprus, who is currently getting plenty of winners from her Cosmic Rumble litter.

Their dam, Cheeky Sprite has proved herself an outstanding producer, producing some very good winners from her three other litters, whelped in December 2005 by Token Prince (including Queen Lauryn and Sassy Sprite), March 2007 by Surf Lorian (including Santino Marella) and September 2009 by Where’s Pedro (including Great Gunns), including bitches who have gone on to prove themselves at stud.

Aston Amelia’s first litter, whelped in March 2014 by Collision, produced Aston Emilio, Aston Gaudi, Aston Hammer, Aston Prada, Aston Sissy and Collision Course, then she has since whelped a litter of one dog and two bitches, by Barcia Bale, in April 2015, with her first two litters both bred by Ray Borda in South Australia.

Greys Destiny* has been a great producer, with winners from her June 2011 litter by Velocette and August 2012 litter by Brett Lee, and she has just one named to date from her September 2014 , second litter by Where’s Pedro.

Looby Lu is from a litter which included Deadly Clear, Deadly Surfer, Deadly Vane, Dozen He Go, Miss Vane and Slicky Scooby, with their dam also producing winners from an August 2013 litter by Fear Zafonic* and a repeat mating to Vee Man Vane, whelped in October 2014.

She is from a litter of five named, which included Magic Didak, Pretty In Blue, Pretty Nollina and Pretty Pearl, with their dam also producing winners her two other litters, August 2010 by Cosmic Rumble and December 2011 by Bartrim Bale.

Portrait Ignites raced 29 times for the handy record of nine wins and six placings, doing most of her racing in Tasmania where she won four times over 461 metres at Hobart (25.99), twice over 515 metres at Launceston (29.59) and 452 metres at Devonport (25.90) after having won over 515 metres at Sandown (29.97) in one of three Victorian starts before heading south.

She has one previous litter on file, four dogs and six bitches, whelped in April 2015 by Barcia Bale. 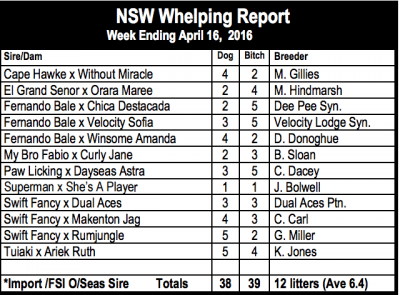 The Dee Pee Syndicate, from Toongabbie, has the first of the three litters, which is two dogs and five bitches, from the 2014 Group 1 National Sprint Championship winner, and 2014 Group 1 Melbourne Cup runner up, Chica Destacada (May 2012 Cosmic Rumble x Eluthra), whose dam is by Most Awesome x Buena Sera (Hotshow Sam x Sarah Isle).

Chica Destacada is from a litter which included Capital Game, Torero, Voussir, Spiritual Charm, Spiritual Love and Time To Riot, with their dam also producing winners from her four other litters, by Bombastic Shiraz, El Galo, Magic Sprite and Premier Fantasy*.

She is from a litter which included Kilto, Madam Abbey, Nakara, Permitted and Wishez, with their dam’s only having one other litter on file, whelped in November 2009 by El Galo.

She is from a handy litter, which included Winsome Bluey, Winsome Dan, Winsome Jacko, Winsome Jenny, Winsome Mission and Winsome Warrior, with their dam also producing winners from both of her other litters, whelped in December 2010 by Where’s Pedro and February 2012 by Bit Chili.

NEXT we have a nice litter of eight pups by the outstanding sprinter and well bred stud prospect, Paw Licking (March 2011 Elite State x Kingsbrae Di).

She is from a litter which included Dayseas Cosmo, Dayseas Rigg, Flash Goran and Sinuk, with their dam also producing winners from her other litters, by Big Daddy Cool, Bond, Dyna Tron and Path To Power.

OUR final litter from this week’s NSW list, is one of nine pups, bred by Orangeville breeder, Keith Jones, by the under-rated sire Tuiaki (March 2008 Premier Fantasy* x Shireen’s Habit).

She is from a litter of seven named, which included Red Ariekm Ariek Mirage, Big Dee Ariek, Ear’s Ariek, Go Michelangelo and Go Teresa, with their dam’s only other litter, whelped in March 2011, by Where’s Pedro, producing Ariek Pirate, Ariek Viv and Where’s Ariek.

She has winners on file from one previous litter, two dogs and two bitches, whelped in February 2014, by Spring Gun, with three named, Ariek Ammo, Ariek Recoil and Spring Ariek.

TURNING our attention to South Australia, where we have chosen two litters for review from their May litter registrations list of six litters, which produced 21 dogs and 23 bitches, and an average of 7.3 pups per litter.

He is a proven sire, from only three named offspring on file, Amalite, Blood Red and Bluestone, who were whelped in January 2015 by Frantic Fusion.

She is from a litter of four which included Adim Assassin, Chelsea Flower and Gemtree, with their dam’s only three other named offspring, My Diamond Tina, Papatheo and Running Radish, whelped in December 2009, by Bond.

She is a proven producer with two previous litters on file, nine dogs by Magic Sprite, whelped in February 2014, then three dogs and three bitches, whelped in November 2014 by Lochinvar Marlow, with both litters bred by Jason Caddy from Surrey Downs.

Between them Kalden Komoto and Sometimes Speedy raced 161 times for the great record of 56 wins and 68 placings, so these well bred youngsters certainly have winning in their blood.

NOT many litters around these days by the 2002 Sandown Shootout and SA Greyhound Of The Year, Silver Saul (February 1999 Oak Raider x Sudden Magic), whose dam is by Sudden Storm x Willow Lee (Tempix x Delpha Lee), but we have one this week.

She is from a litter which included Club Seven, Galapagos, Only Jess and Pedrosa, with their dam also producing winners from her own litter by Silver Saul in January 2005, and she also has a March 2006 litter by Where’s Pedro on file.

STUD Service figures released by GRV, for the month of April showed a total of 28 services by 18 different sires, with only five sires with multiple services, Dyna Double One with three, then Banjo Boy, Barcia Bale, Fabregas and Kinloch Brae* with two each.

Looking at the combined figures for the first four months of the year, Fernando Bale has been the most popular sire with breeders, with 15 services, followed by Dyna Double One with 12, Barcia Bale 11, Magic Sprite 9, Banjo Boy 7, Kinloch Brae* and Stagger with 6 each, Fabregas, My Bro Fabio and Nolen with 5 each, Bella Infrared*, Hostile, Kiowa Mon Manny* and Premier Boloney with three each, then Bekim Bale, Blue Giant, Cosmic Rumble, Dyna Tron, Echelon, General Destini, Hooksy, Jagger Swagger, KC And All*, Kiowa Producer*, Nitro Burst, Oaks Road, Paradise Madison*, Smart Missile, Spud Regis, Vee Man Vane and Walk Hard with two each, completing the list of sires with multiple services.

Now let us have a look at the full list of all sires with services registered in Victoria during the four months to the end of April, in alphabetical order, with the two figures for each sire representing their services in April then then the four months January to April combined. 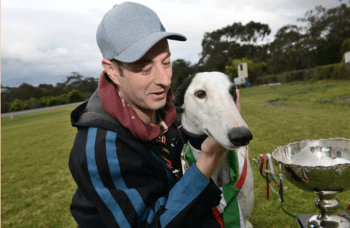 THE 2016 Coursing season came to a fitting climax with the running of the two day Waterloo Cup meeting at Lang Lang last weekend in cold wet and windy conditions.

Outstanding coursing greyhound, Better Than This (October 2013 Knocka Norris x Father Of Mine), trained at Cranbourne by Andrew Paraskevas and unbeaten this season, was too god for the far less experienced Dragon Class (October 2013 Dyna Tron x Minnie Power), trained at St Albans by Charles Merceica, in the $12,970 to the winner final. The runner up collected $3,875, with defeated semi finalists $800 each and defeated quarter finalists $200 each.

The other main support event, the Waterloo Purse was won by the John Taylor trained, Ido Voodoo (October 2013 Head Bound* x Surf Queen) who proved to be too good for Geoffrey Howell’s Levenseat Bevan (Vee Man Vane x Potomac) in the final.

It was good to see GRV Board Chairman, Bernie Carolan, and CEO Allan Clayton at the traditional official NCA Waterloo Cup lunch, supporting coursing and grass roots greyhound racing in this state.

The lunch also saw NCA President, Peter Craig, pay tribute to long standing Treasurer Heather Villenger, who will retire from the position after the AGM .

Heather has been an amazing contributor, not only to Coursing, but to greyhound racing in general throughout Victoria for many years and whilst it will no doubt be difficult to replace her on the NCA Executive, it will be good to see her have a well earned rest.

TOUGH AS NAILS (Black dog, September 2014 Fabregas x Great Gunns) Trained by Gerry O’Keeffe at Neerim Junction and had three placings from four starts over 460 metres at Warragul before last start second over 515 metres at Sandown (SAP) on August 21, beaten 3.4 lengths in the race won by Rock Away (29.62). Now had 12 starts for four wins and six placings, has plenty of ability and will win again soon.

LOOSE UNIT (Black dog, February 2014 Cosmic Chief x Such Is Life) Trained at Lethbridge by Jordan Cooper and won over 500 metres at Bendigo and 545 metres at Ballarat, before finishing seventh over 595 metres at Sandown (SAP) on July 31. Freshened up before third over 515 metres there (SAP) on August 21, beaten 2.86 lengths in the race won by Unika Allen (29.71). Now had 12 starts for four wins and three placings and not far off another win.

DEWANA EXPRESS (Black dog Cosmic Rumble x Wildcard Lass) Another ‘Dewan’ chaser from the Carrum Downs kennel of Matthew Dewan, who has now had ten starts for two wins and six placings. Placed Sandown 515 metres before striking trouble and eighth there, then back to SAP meeting August 21, when good second, beaten 1.06 lengths by Scorching Fella (29.96). Not far off another win.

NEXT week we will have an update on the NSW Stud Service figures for the month of April and our usual review of litters, from Victoria and New South Wales, along with any news that comes in through the Mailbag.