THIS week’s review of litters selected from the Victorian Litter Registrations list for the week ending June 28, begins with a nice litter of nine pups by the 2012 Golden Easter Egg winner, Don’t Knocka Him (November 2009 Knocka Norris x Surf Queen).

She is from her dam’s only litter, which included Pagani Chloe, Pagani Duke, Pagani Ebony, Pagani Lola and Pagani Prince and on the track she raced 49 times for four wins and 19 placings, winning all four races over 390 metres at Shepparton (22.53) where she was also placed 16 times, and also placed over 425 metres at Bendigo and 300 metres up the straight at Healesville.

She is from a litter of four named, which included Immortal Panther, Rogue River and Stonedance, with their dam, Smashing Amy, having produced some outstanding winners from both of her other litters on file.

On the track, Noxlee, only had the one start, over 350 metres up the straight at Healesville, in January last year, from box three, finishing fifth, beaten by seven lengths in the race won by About To Peak (20.04).

She is from a litter which included All Guns Blazing, Bomber Title, Infinite Power, Preakness and She’s A Blaze, with their dam also producing winners from both of her other litters, whelped in October 2013 by Bombastic Shiraz and December 2013 by Collision.

Regal Patch raced 36 times for nine wins and 13 placings, winning over 520 metres at Cranbourne with one placing at Sandown in her first four starts, before transferring to Western Australia, where she won eight of 32 starts, with 12 placings, winning five races over 530 metres at Cannington (30.63) and three times over 509 metres at Northam (29.77). 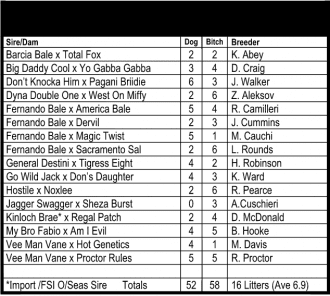 She is from a litter which included Almighty Wilslow, Carra Winslow, Cindy Winslow, Dark Heart, Donnie Winslow, My Lady Winslow and Proctor’s World, with their dam also producing winners from her two other litters, whelped in November 2005 by History Lesson and October 2010 by Mogambo.

Proctor Rules raced 31 times for two wins and four placings, winning over 430 metres at Bendigo (25.20) and 450 metres at Warrnambool (25.62), where she was also placed twice and worth noting she was placed twice over 550 metres at Ballarat.

She whelped a litter of four dogs and four bitches, in April 2014, by Most Awesome, with one named to date, one of the dogs, Classic Winslow.

TURNING our attention to the NSW Whelping Report for the week ending March 13 where we only have a small list of seven litters, with our reviews starting with one of 10 pups by top Victorian Metropolitan sire Barcia Bale (March 2010 Go Wild Teddy x Princess Bale).

She is from a handy litter, which included Kwazulu Icon, Luzaka Icon, Plumb Quick, Spring Amanda and Spring Charlotte, with their dam also producing winners from her two other litters, whelped in September 2011 by Go Wild Teddy and a litter of eleven named inNovember 2012 by Spring Gun.

From father to son

NEXT we have a litter of seven pups, from Spring Hill breeder, Scott Board, by the outstanding multiple Group 1 winner, Dyna Double One (March 2013 Barcia Bale x Crystin Bale).

Emily Dawn is from a litter which included Brother’s Memory, Dawn Knows Best, Hilltop Dawn, Supreme Brother, Bee Jay Dawn, Brother Supreme, Crack Of Dawn and Paula Dawn, with their dam also producing winners from her two other litters, whelped in November 2007 by Collision, then July 2012 by Where’s Pedro.

She has one previous litter on file, whelped in July 2015 by Spring Gun which unfortunately resulted in the one dog pup, and it appears she missed when mated to Magic Sprite, so she has done well with this litter.

She is from a very good, 100% winning litter, which included Eleven Madison, Fratelli Fresh, Le Burglar, Magic Earner and Sokyo, with their dam also producing winners from each of her four other litters, by Collision, Hallucinate, Magic Sprite and Where’s Pedro.

Doozy was lightly raced with 15 starts from which she recorded one win, over 535 metres at Richmond (30.77) and five placings, three over 520 metres at Dapto and one each over 472 metres at Bulli and 520 metres at Wentworth Park.

She has a litter of five dogs and two bitches on file, whelped in July 2015, by Barcia Bale, so she certainly has some well bred youngsters on the ground to start her career as a brood bitch. 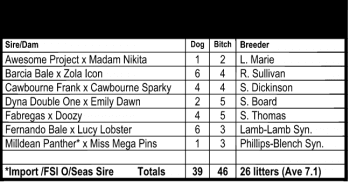 2014 Group 1 Vic Peters winner, Lucy Lobster is from a litter of only two named which included One Tress Lass, with their dam also producing winners from four other litters, by Bombastic Shiraz, Mantra Lad, Slater and Surf Lorian.

SEVEN litters on the South Australian Litter Registrations list for April, and we have chosen three to review this week, starting with two litters by Lochinvar Marlow (July 2007 Bombastic Shiraz x Sensation Lee).

Registered by The Kelly Gang syndicate, the first litter for review is one dog and five bitches from the well bred bitch, Dream Choice (April 2011 Cosmic Rumble x Wongawillicath), whose dam is by Placard x Wongawillimilly (Phantom Fire x Parachilna).

She is from a litter which included Choice Man, Dark Dee, Direct Sonic and Sweet Cosmic, with their dam also producing winners from her two other litters, by Big Daddy Cool and Surf Lorian.

Ruby Swift is from a litter of nine named, which included Black Beluga, Couger Alert, Linear Hot, Montessori, Nebula, Quevega, Riley Cracks It and Wallace Lad, with their dam also producing winners from her only other litter, whelped in April 2011 by Bombastic Shiraz.

Power Merc is from a litter of nine named, which included Burra Badgirl, Enamaroe, Housefire, Kingoonya Queen, Pippa Ya Rippa, Ra Ra Ra, Red Tin and Snappa Cheerway, with their dam having five other named offspring from two litters, by Bekim Bale and Pure Octane.

She has one previous litter on file, three dogs and two bitches, whelped in March 2015, by Cape Hawke.

STUD Service figures released by GRV for the month of March showed that Fernando Bale and Magic Sprite were the most popular sires of the month with three services, with Barcia Bale, Hooksy, KC And All*, Kiowa Producer, Oaks Road and Stagger, with two each completing the list of eight sires with multiple services, from the month’s total of 34 registered services from 24 different sires.

Let us now look at the full list of all sires with registered services in Victoria for the three months to the end of March, in alphabetical order, with the two figures for each sire representing their March Services, then January to March totals. 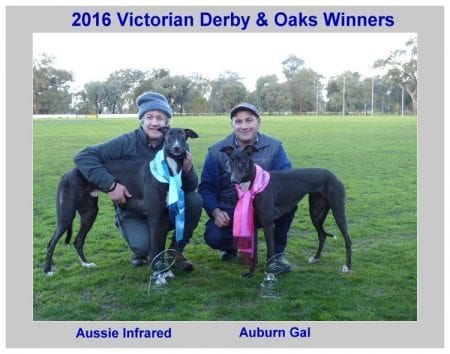 COLD, wet and windy, Longwood was the venue for last weekend’s running of two of Victoria’s oldest coursing classics, the time honoured, Victoria Derby for dog puppies and Victorian Oaks for bitch puppies.

This year’s Victoria Derby was won by the beautifully bred, Aussie Infrared (May 2014 Bella Infrared x Ebby Miss) trained by Rosalyn Hume, who was too good for the Katrina Jordan trained Ali’s Title (May 2014 Brett Lee x Cheap Chloe in the final after two days of excellent coursing.

The main support to the two age classics was the GRV Twin Code Challenge, which sees the winners and runners up in the four events contesting the twin code challenge final at Shepparton on August 4.

The four winners, Bakali, Swan To Steele, I’m Cast Bear and I’ve Got Wings, along with the four runners up, Magic Sorcerer, Cosmic Spur, Arome Peche and Taxi, are off to Shepparton.

Winners of the remaining events on Sunday’s second day of the programme were, Critic, who defeated Avatar Storm, Sultan, who defeated Donkey Tron and Nitro Princess, who defeated Showgirl Miss.

Thanks to NCA Secretary, Sue Delaney for keeping us up to date with all the fields and results, and also for the great photo of the two classic winners, Aussie Infrared with Geoff Collins, partner of trainer Rosalyn Hume, and Auburn Gal with Paul Elul.

BETTER IN BOOTS (Black bitch, March 2014 Magic Sprite x Fainting Fancies) Trained at North Sunshine by Martin Galea, her three starts have all been over 515 metres at Sandown (SAP) where she has finished third, eighth and third, beaten 15 lengths and 16 lengths at her first two starts, both behind Pechey, the first in 29.54, before a last start third from box seven, July 24, beaten six lengths in the race won by Rosie Riccarton (30.08). Will improve further with experience so keep an eye out for her.

KING OF DIAMONDS (Brindle dog, November 2014 Dyna Tron x Wild Fire) One of three from the same litter, trained at Devon Meadows by John Carr, who was first up sixth at Sandown (SAP) July 24, beaten six lengths in the race won by Shark Fever (30.53). The other two, She’s Got Dash ran second in the same race, and Celtic Fire ran third in the race won by Dyna Boomer who ran 29.55 in a maiden.

JUST AS TOUGH (Black bitch, September 2014 Fabregas x Great Gunns) Trained by Gerry O’Keefe at Neerim Junction she finished well back on debut over 515 metres at Sandown (SAP) after missing the start then getting into all sorts of trouble in the race won by Dyna Boomer (29.54). Will improve with a little more luck very shortly.

NEXT week we will have the NSW Stud Service figures for March and our usual review of litters from both Victoria and New South Wales, and of course any news that comes in through the Mailbag.

We are particularly interested in hearing from Queensland breeders about their litters, after we still have not received any response from the authority there in regards to our request for information.