THIS week’s review of litters selected from the Victorian Litter Registrations list for the week ending August 29 begins with three litters by 2015-16 AGRA Greyhound Of The Year, Dyna Double One (March 2013 Barcia Bale x Crystin Bale).

Wallan breeder, Brent Sullivan, who has been very busy of late with whelpings and started last week’s review with two litters, has two of the three litters by Dyna Double One.

Buxton Miss is from a litter which included prolific winner, Kiss Me Ketut, Morningside, Not Onya Nelly and Quick Succession, with their dam also producing winners from each of her five other litters, by Bekim Bale, Black Enforcer, Brett Lee, Hallucinate and Vee Man Vane.

According to my breeding records, she has a litter of four dogs and three bitches on file, whelped in July 2015, by Banjo Boy, who are now 14 months old, so she certainly has some well bred youngsters on the ground to kick start her breeding career. 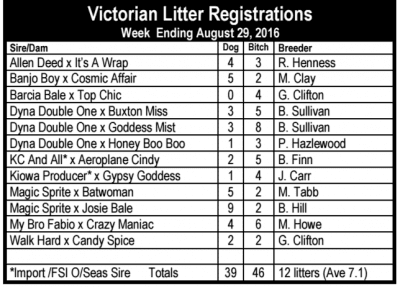 Goddess Mist is from a litter which included Check Mate, Amber Blaze, Carbon Neutral, Cosmic Kingdom, Cosmic Star, Don Julio and McKnight, with their dam, Cosmic Goddess having an exceptional record as a producer with winners from her other litters, by Bombastic Shiraz, Brett Lee, Cosmic Rumble, Hallucinate and Premier Fantasy*.

Goddess Mist only raced twice, finishing third in her first race start, over 400 metres at Geelong in April 2014 before injury struck at her second start, eighth over 400 metres at Warragul in May 2014 which ended her track career.

She has six named offspring on file, Canny Drive, Eftpos Jess, Macquarie Mist, Megadrive and Ningham Express, who were whelped in October 2014, by Mogambo, then, one named, Penske Mist, whelped in August 2015 by Flying Penske*.

She is from her dam’s only litter, of seven named, which included Aeroplane Blazer, Blue Blood Queen, Brodus Clay, Choco Rocco, Rock and Treadstone Chloe.

On the track she was lightly raced with just 16 starts from which she managed two wins and five placings, winning twice over 425 metres at Bendigo (24.48, 24.49), with four placings there and one placing over 390 metres at Shepparton.

She has one previous litter on file, of six dogs and four bitches, whelped in September 2015, by Oaks Road, which were bred by Toolleen breeder, Robert Hayes.

The dam has been an outstanding producer, with good winners from both of her other litters on file, whelped in May 2011 by Dyna Lachlan and May 2012 by Cosmic Chief.

Josie Bale only raced 18 times, for two wins and nine placings, winning twice over 450 metres at Ballarat (25.87, 25.95), where she was also placed and worth noting she was placed twice over 525 metres at The Meadows and six times over 515 metres at Angle Park.

TARNEIT breeder, Mark Howe, has a nice litter of 10 pups on the list this week by freakish sprinter, My Bro Fabio (March 2012 Turanza Bale x Flamenco).

Crazy Maniac is from a litter which included El Train, Powerful Flight and Sir Dumbledore, with their dam also producing winners from both of her other litters on file, whelped in August 2011 by Bo Frazier and October 2012 by Dyna Tron.

She is already a proven brood bitch, with winners from her first litter, bred by Kylie Cassidy, whelped in October 2013, by El Grand Senor, which included Amaroo Gonzales, Beachbar Kenny, Inside Elle, Salute The Wolf and Screw And Bolt. 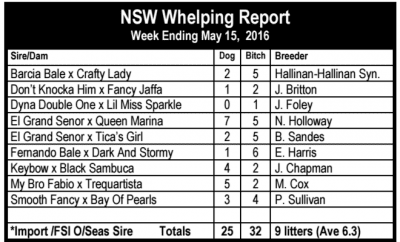 TURNING our attention to the NSW Whelping Report for the week ending May 15, our first litter selected for review has seven pups by leading Victorian metropolitan sire Barcia Bale (March 2010 Go Wild Teddy x Princess Bale), who is currently in fifth place on the NSW metropolitan sires list.

The Hallinan-Hallinan syndicate, from Clergate, registered the litter of two dogs and five bitches, who are from the beautifully bred, lightly raced bitch, Crafty Lady (July 2009 Bit Chili x Valeri’s Purse), whose dam is by Most Awesome x Many Tricks (Head Honcho x Miss Cruise).

She is from a litter which included Crafty Annie, Crafty Graham, Crafty Hen, Crafty Jamie, Crafty John, Crafty Joseph, Crafty Marg, Crafty Mark and Crafty Warwick, with their dam, Valeri’s Purse also producing winners from each of her other litters, by Made To Size, Pure Octane and Slater.

She has six named offspring on file, from her February 2014 litter by Nolen, which produced, Zipping Gator, Zipping Hersi, Zipping Kara, Zipping Nolen, Zipping Silva and Zipping Stu, then she has four dogs and three bitches on file, whelped in September 2015 by Mogambo.

She is from a litter which included Fascinate Mary, King Sapphire, Mike Marlow, Queen Esther and Zac Marlow, with their dam also producing some very good winners from her only other litter on file, whelped in September 2013, by Spring Gun, which included, Big Tee Rex, Magic Spring, One Samuel, Queen Audrey, Spring Solomon and Zion.

Tica’s Girl is one of her dam’s only two named offspring, along with Ticabond Victory, who raced only once, when unplaced over 274 metres at Appin in April 2013.

The one dog and six bitches in the litter, are from the very well bred bitch, Dark And Stormy (February 2009 Bit Chili x All Display), whose dam is by Rapid Journey x Another Bonus (Head Honcho x Berrigaan).

She is from a litter of four named, which included All Debree, Big Bonus and Total Debree, with their dam also having winners on file from both of her other litters, whelped in May 2005 by Elite State x April 2007 by Collision.

OUR final litter for review this week is one of seven pups by the beautifully bred, stud success, Smooth Fancy (November 2007 Collision x Flash Fancy).

Bay Of Pearls is from a litter which included Kath’s A Cougar, Kath’s Rebel, Star John, Star Reggie, Uncut Ruby and Wild Albert, with their dam only having two other named offspring, Shirley A Star and Star Jack, who were whelped in July 2010 by Bit Chili.

Her breeding career has got off to a good start with winners from the seven named from her first litter, whelped in May 2013, by Magic Sprite, Bay Of Sprite, Dianne’s Pearl, Magic Kitchen, Pearls A Plenty, Pearl’s Angel, Renouf’s Magic and Sister Tasha, then she has a litter of three dogs and three bitches on file, whelped in August 2015 by Oaks Road.

STUD Service figures released by GRV covering services registered in the month of May, showed a total of 25 services by 19 different sires, with only four sires with multiple services, Kinloch Brae* with four, and Bekim Bale, Fernando Bale and Paw Licking with two each.

Let us now look at the complete list of all sires with services registered in Victoria in the first five months of 2016, in alphabetical order, with the two figures for each sire, representing their services in May, then the five months January to May. 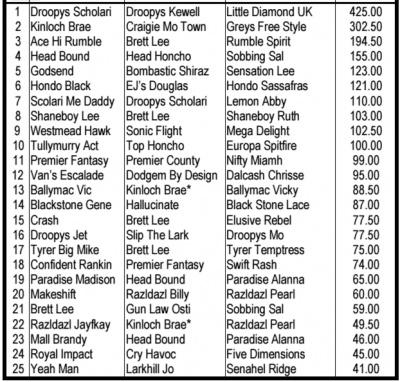 While it is necessary to freshen up our breeding stocks from time to time with overseas bloodlines, I often think there is too much emphasis placed on international sires, sometimes to the detriment of our own Australian bred bloodlines, but that’s probably a dangerous debate to get into, and whichever way you think, better left for another day.

I always find it interesting to look through the breeding of the top sires from around the world, and often find myself lost in my private little place where pedigrees dominate thoughts.

Interested to know thoughts on the English-Irish list, or the current state of our own breeding industry, setting aside the current problems in NSW. So, if you’ve got an opinion you would like to put forward, email: [email protected]

STILL IN PLAY (White & black dog, March 2014 Djays Octane* x She’s A Player). Trainer – Kevin Chivell, Sunbury. Only raced twice for eighth, from box six over 525 metres MEP, August 17 beaten six lengths in the race won by Crazy Kicker (30.04) before second up fourth from box four, 515 metres SAP, September 18, beaten 9.3 lengths in the race won by You Bug Me (30.16). Hasn’t had much luck with boxes in first two starts, but looks to have plenty of ability and won’t take long to break through.

BEETEE (Black dog, May 2014 Cosmic Rumble x My Mum Sienna). Trainer – Brian Toner, Giffard West. Raced five times for four placings and has his foot right on the till. Thirds over 520 metres at Cranbourne, 600 metres MEP and 600 metres The Meadows, before last start third, from box five, SAP, September 18, beaten 6.3 lengths in the race won by Canal Court (34.80). Has been a model of consistency to date and should be rewarded with a win shortly.

NEXT week we hope to have the US Sires list for the eight months to the end of August, stud service figures from NSW for the five months to the end of May, and our usual review of litters, from Victoria and New South Wales, along with any news that comes in through the Mailbag.