His sire, Black Shiraz (March 1993 Ginger x Dark Horizon) is from one of the most successful sire lines of all time, going back through three Australian Cup winners, Ginger, Eaglehawk Star and Tangaloa, to the great Temlee.

Better With Age did not race, but the other eight all won races, with Bombastic Shiraz the most successful, becoming the only greyhound to ever win the Triple Crown; the Melbourne Cup, Sandown Shootout and the Topgun, with his 35 starts resulting in 18 wins and 11 placings, which earned connections $360,000 in stakes, and he was judged Victorian Greyhound Of The Year.

His litter of five dogs and six bitches on this week’s list, registered by Jodie Lord for the Asa Syndicate, from Gunning, is from the beautifully bred bitch, Cawbourne Whip (January 2012 Dyna Lachlan x American Spot) whose dam is by Molotov* x Elite Monelli (Elite State x Elusive Rebel).

Cawbourne Whip is from a handy litter, which included Caeser To Excel, Cawbourne Saleen, Cawbourne Cobra, Cawbourne Jag, Cawbourne Lexus, Cawbourne Porshe, Cawbourne Rev, and Cawbourne Thunda, with their dam, American Spot producing winners from both of her other litters, whelped in February 2011 by Brett Lee and November 2013 by Kinloch Brae*.

She has one previous litter of six dogs and five bitches on file, whelped in March 2015 by Brett Lee, so she has been a prolific producer to date and has some beautifully bred youngsters on the ground. 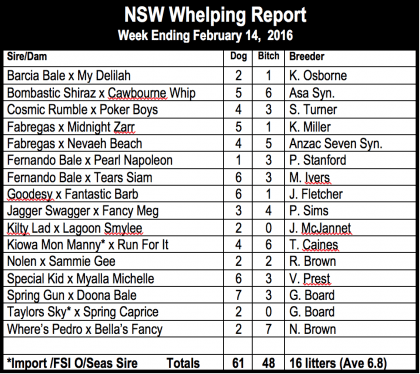 She is from a litter of four named which included Big Daddy Zarr, Drama Zarr, and Pumped Up Zarr, with their dam also producing winners from her other litters, by Bond, Hallucinate, Just The Best, Spiral Nikita*, Where’s Pedro and Whisky Assassin, with a total of 29 named offspring from her seven litters.

She has two named offspring, De Mel Zarr and Ef Ay Zarr, from her first litter of two dogs and four bitches, whelped in September 2014, by Barcia Bale.

She is from a litter of four named, which included Blue Beach, No No Notorious and Senor Beach, with their dam also producing winners from her three other litters, whelped in September 2009 by Bombastic Shiraz, April 2011 by El Galo and June 2013 by Magic Sprite, with every one of her 22 named offspring winning races, which is an amazing achievement.

The four dogs and six bitches in the litter, which should attract plenty of attention from prospective buyers with future breeding in mind, are from the very well bred bitch, Run For It (March 2009 Where’s Pedro x Miss Beeslee), whose dam is by Collision x She Sprant (Token Prince x Kellbrett Jeanie).

She is from her dam’s first Where’s Pedro litter, which included Miss Sabre, Noble Pedro, Pretty Good, Trix, Where’s Tobin and Yankee Lady, with her second Where’s Pedro litter, whelped in February 2012 also producing winners, as did her two other litters, whelped in November 2010 by Magic Sprite and October 2012 by Tuiaki, which was an outstanding litter of seven named who were all winners, including five who won more than 10 races each.

OUR final litter from the NSW list this week is one of nine pups by outstanding stud success, Where’s Pedro (April 2002 Brett Lee x Elusive Rebel).

She is from a handy litter, which included All Too Fancy, Fancy Chance, Fancy Mumma, Fancy Ruby, Lusair, Smokin Fast, Villainous and Wise Warrior, with their very good producing dam, Sweet Fancy, also producing good winners from each of her other litters, whelped in January 2009 by Where’s Pedro, October 2010 and January 2013 by Brett Lee, then December 2013 by Cosmic Chief.

Bella’s Fancy only raced four times for one win and one placing, winning over 535m at Richmond (31.30) and finishing second over 520m at Wentworth Park. 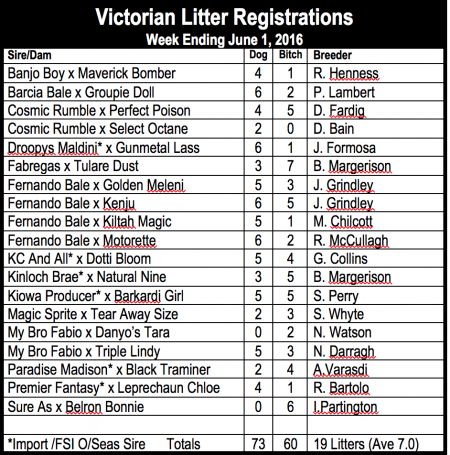 Belron Bonnie is from her dam’s second Where’s Pedro litter, with five named, which included Belron Bingle, Blue Ava, outstanding sprinter, now at stud, Peter Rocket and Yes We Did.

In addition to her first Where’s Pedro litter, whelped in December 2005, Belron Blue also produced winners from her two other litters, whelped in April 2008 by Global Warming and May 2009 by Hallucinate.

On the track, Belron Bonnie raced six times without placing and she has three named offspring on file from her first litter; Belron Bliss, Belron Gaz and Belron Gus, who were whelped in March 2014, by Stagger.

The three dogs and seven bitches are from the beautifully bred bitch, Tulare Dust (August 2012 Bekim Bale x Casey’s Angel), whose prolific producing dam is by Spiral Nikita* x Leprechaun Yap (Hotshot x Leprechaun Miss).
She is from a litter which included the prolific winner, All Strung Out, Angel’s Chorus, Anything Less and Yesterday’s Wine, with their dam producing winners from her six other litters, by Brett Lee, Collide, Collision, Go Wild Teddy, Smooth Fancy and Where’s Pedro.

On the track, Tulare Dust raced 10 times for two wins and six placings, winning twice over 520m at Cranbourne (30.18), where she was also placed four times, with additional placings over 515m at Sandown and 525m at The Meadows.

She is from her dam’s only litter, which included Donde Es Pedro, El Deseo, Evade, Kona Leeroy, Submachine Gunn and Wot Ya Got, with my breeding records showing she has a previous litter on file, of three dogs and two bitches, whelped in June 2015, by Barcia Bale.

RESPECTED Wattle Flat breeder, Geoff Collins, has a nice litter of nine pups on the list this week by the highly rated US sire, KC And All* (October 2006 Gable Dodge x KC Did It Best).

She is from a litter which included Agent Jack, Dominic Toretto, Holy Mackerel, Jimmy Crab, Llewy’s Lad, Redneck Ruby, Ruff Cut Diamond and Staker’s Chin, with their dam’s only other litter on file, whelped in May 2014 by Collision, having three named, Golden Ollie, Kuta’s Lad and Nachos Pav.

Ten for US Import

She is from a handy litter, which included Bingo Bob, Dellbriezie, Oddball, Potomac, Really Rockin’ Rockin’ Along, Silly Zara and Zarbility, with their dam also producing winners from her two other litters, whelped in January 2007 by Where’s Hoover and November 2007 by Bond.

She has one previous litter on file, with unfortunately just the one dog pup, whelped in November 2014 by Kinloch Brae* and I would suggest he will certainly be one to look out for.

STUD Service figures released by GRNSW for the month of February showed a total of 47 services registered from 23 different sires, with those having multiple services being; Dyna Double One with 8, Kinloch Brae* and Swift Fancy with 4 each, Barcia Bale, Fabregas, Fernando Bale and Magic Sprite with 3 each and Don’t Knocka Him, El Grand Senor, Kiowa Mon Manny* and Where’s Pedro, with two each.

Looking at the combined figures for January and February, Dyna Double One tops the list with 13, followed by Fernando Bale with 7, Fabregas and Swift Fancy with 6 each, Barcia Bale with 5, Don’t Knocka Him, Kinloch Brae* and Magic Sprite with 4 each, Bekim Bale, Dyna Villa and El Grand Senor with 3 each, then Banjo Boy, Cosmic Rumble, Kiowa Mon Manny* and Where’s Pedro with 2 each completing the list of all sires with multiple services.

Let us now look at the full list of all sires with registered services in NSW for the first two months of the year, in alphabetical order, with the two figures for each sire representing their services in February, then January-February combined.

The final of the time-honored Ray Boundy Memorial, honoring one of most colorful bookmakers of days gone by, was won by the Andrew Paraskevis trained. Better Than This (October 2013 Knocka Norris x Father Of Mine) who defeated Happy Hour (September 2013 Nitro Burst x Hotel Baci), trained by Les Weeks at Tyabb, with both looking likely contenders for the Waterloo Cup at the end of the season.

The other support event was the Gippsland Cup, which saw the final fought out by litter brothers, Why Not Barrel and Why Not Mick (June 2013 Nitro Burst x Why Not Bev) trained at Clyde by Wayne Mannix, with Mick proving too strong for Barrell on the line, and I would imagine we will see both of them in the Waterloo Cup as well.

Congratulations to all the winners, the NCA, and Lang Lang Club for two days of competitive coursing with twelve events on both days, and a reminder the next Coursing meeting, will be at Longwood on Sunday July 7, featuring the Longwood Cup.

NADAL (Black dog, July 2014 Barcia Bale x Golden Duck) Trained by Dean Swain and started favourite when he got into all sorts of bother at his first race start, over 520m at Wentworth Park, on June 22 when third in a maiden heat, won by the very smart greyhound, Reviewer (September 2014 Fabregas x Scissor Queen) who missed the trouble and got right away to win by 11.5 lengths in 29.97. Showed plenty of track sense in running on into the placings and will be all the better for that run. Next time!

MR. ZIP ZIP (Black Dog, July 2014 Barcia Bale x Dozen Oysters) Trained by Michael Ivers this pup finished third from box three, when having his first start, over 520m at Wentworth Park, June 22, beaten 4.25 lengths in the race won by Mega Fletch (30.69). Will improve with experience and look for him at his next start.

COGBURN (Fawn Dog September 2014 Fabregas x Scissor Queen) Litter brother to the very smart, Reviewer, who finished third at his first start, from box two over 520m at Wentworth Park on June 22, beaten 7.75 lengths in the race won by Black Hole Sun (30.20). Will benefit from the experience of that run and keep an eye on him next time out.