Their dam also has winners on file from each of her two other litters, whelped in December 2009 by Brett Lee, and May 2012 by Collison, which included the very fast sprinter Shakey Jakey, who is now standing at stud with great potential if he gets the right bitches and enough of them to make it count. 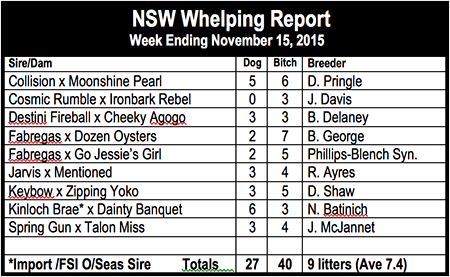 She is from a very good litter, which included, Fear Blue Size, Shakeby, Surfonic, Walk With Faith and the prolific winner Whata Good Size, with their dam, Surf Queen, producing winners from each of her five other litters, by Brett Lee, Head Bound*, Knocka Norris (twice) and Pure Octane.

One of her two Kocka Norris litters, produced the 2012 Golden Easter Egg winner, now sought after sire Don’t Knocka Him, whith the second litter including another prolific winner, Tear Away Size.

Dozen Oysters raced 16 times for five wins and six placings, winning twice over 420m at Lismore (24.24), twice over 407m at Grafton (23.03) and also over 311m at Cranbourne.
\
She has one previous litter on file, four dogs and four bitches, whelped in July 2014 by Barcia Bale, so she certainly has some well bred pups on the ground to tempt prospective buyers.

She is from a litter which included Go Black Jack, Go Crash, Go Mini Mouse and Izzy Impact, with their dam, Go Mighty Mouse, also producing winners from her three other litters, by Bombastic Shiraz, Elite State and Knocka Norris.

She has two previous litters on file, whelped in November 2013, by Milldean Panther* with four named, Meteor Panther, Pantera Nera, Shadow Panther and Tepow, then one named, Bluestone Jesse, who was whelped in April 2015 by Cosmic Rumble.

Zipping Yoko is from a handy litter, which included Zipping Dermot, Zipping Elvis, Zipping Lenny, Zipping Midge, Zipping Nora, Zipping Oscar, and Zipping Tyrone, with their dam’s only other litter on file, whelped in October 2013 by Mantra Lad, having three named, Zipping Jinx, Xipping Porche and Zipping Prince, who are all winners.

Zipping Yoko raced just three times for three placings, a second and third over 450m at Bathurst and a third over 530m at Cannington.

Keybow is from a litter which included Bat Outa Hell, Flying Kitty, Key Missile, Key Nuclear, Miston Belle, Total Felix and Total Fox, with their dam also producing winners from both of her other litters, whelped in January 2010 by Big Daddy Cool, then November 2013 by Spring Gun.

Dainty Banquet is from a litter of four named, which included Flybuy Banquet, Rocket Banquet and Tycoon Banquet, with their dam having just five other named offspring, from two other litters, First Banquet, Futurama Trilogy and Wombat Way, who were whelped in May 2008 by Eiffella, then Blossom Boquet and Star Banquet, who were whelped in April 2013 by Humdrum. 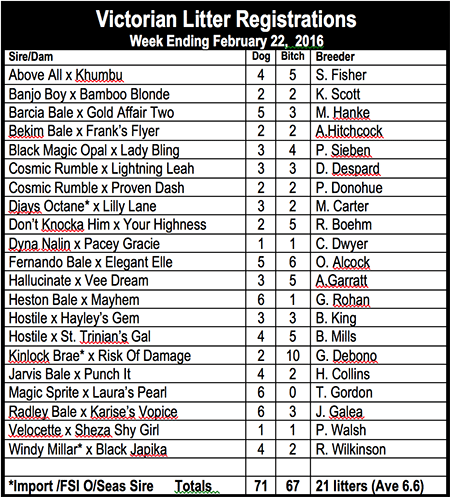 TURNING our attention to the Victorian Litter Registrations list for the week ending February 22, our first litter review is a nice litter of nine pups by the talented New Zealand bred, dual Group 1 winner, Above All (July 2012 Magic Sprite x Kara Janx) whose dam is by Fashion Thief (No Intent x Token Fever) from More Than This (Shining Kev x Little Girl Lost).

Their dam, Spalding Miss also produced several good winners from a June 2011 litter by Surf Lorian, then had just the two named from her April 2012 litter by Bekim Bale, Arengo (18-2-2-2) and Golden Hour, who did not race.

She has produced some good winners from her first litter, whelped in March 2013 by Hutmaker, which included, Annie Oatmeal, Xray Cray, Danger Money, Kantega, Makatu and Track Runner, then she whelped a litter of three dogs and six bitches, by Velocette in April 2014.

Elegant Elle is from a litter which included, Lochinvar Cobra, Lochinvar Mondo, Lochinvar Rossi, My Jack Rabbit and Pure Bekim, with their dam, Pure Elle, producing some outstanding winners from her three other litters, whelped in December 2009 by Bombastic Shiraz, January 2011 by Bit Chili and April 2013 by Fabregas).

With six bitches in the litter there should be plenty of interest from prospective buyers with future breeding in mind, especially given the pedigree of Audacious Elle, combined with the US cross to Kelso’s Fusileer, and the outstanding record of Chloe Allen (September 2007 Primo Uno x Rosemary Bale) as a brood bitch.

On the track Vee Dream raced 12 times for one win and three placings, winning over 400m at Warragul (23.12) where she was also placed, with additional placings over 450m at Shepparton and 390m at Warrnambool.

According to my breeding records she has two previous litters on file, four dogs and three bitches, whelped in April 2013 by Fabregas, then just the one bitch pup, whelped in November 2014 by Knocka Norris.

Worth noting that the six named from the Fabregas litter have all won races, Hard Wicket, Hell On Wheels, Hydra, Logic Lad, Moyarra Okuibi and Moyarra Operani, which should add further to the interest in this litter.

OUR next litter should have prospective buyers with future breeding in mind reaching for the phone, with 12 pups in the litter by successful US bred sire Kinloch Brae* (August 2005 Craigie Mo Town x Greys Free Style).

Registered by Lang Lang breeder, Geraldine Debono, the two dogs and 10 bitches are from the very well bred bitch, Risk Of Damage (November 2010 Path To Power x Above The Sky) whose dam is by Primo Uno x Above The Clouds (Head Honcho x Highly Blessed).
Risk Of Damage is from her dam’s only litter, which included Bad Advice, Big Sub Woofer, Bolt Me Down, Champagne Dream, Holy Track, Mick Mow and Plea For Beer.

Nine for the Voice

Karise’s Voice is from a litter which included, Always Whistling, Celtic Colleen, Lennon’s Lassie, New Gold Dream, Sisco Dance, Sisco Dream and Sisco Legend, with their dam also producing winners from each of her three other litters, whelped in January 2009 by Superman, December 2009 by Bo Frazier and December 2012, again by Superman.

She has one previous litter on file, three dogs and four bitches, whelped in February 2015 by the US sire Kelso’s Fusileer, who should reach the tracks towards the end of this year.

Radley Bale is from a litter of 12, with only two making any real impression on the track but his record was outstanding, with 102 starts for 37 wins and 27 placings, which earned stakes of $570,883.

Fabregas had “Potential top sire” stamped on his record card after he has won his first three or four starts, and retired after winning the 2012 National Sprint Championship final, which took his record to 12 wins from 13 starts, with stakes earnings of $131.055.

He is from a very goodl litter which included, Magic Potion, Ostentatious and Wicked Shiraz, with their dam, Wicked Witch producing good winners from her other litters, by Bartrim Bale, Dyna Lachlan, Hallucinate and Meticulous and she also has two named from her latest litter, whelped in December 2013 by Turanza Bale.

Bombastic Shiraz was Premier Victorian Metropolitan sire in 2007, 2009, 2010, 2012 and 2013, joining the great Temlee as a five time winner, behind Head Honcho who topped the list six times and all time record holder, Chariot Supreme who topped the list for seven consecutive years, from 1987 to 1993. 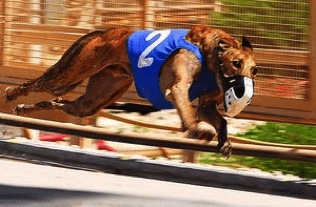 LOOKING through the breeding of the finalists of last Saturday night’s $250,000 to the winner Golden Easter Egg, the standout highlight was the three runners for the successful US born, Irish based sire, Kinloch Brae (August 2005 Craigie Mo Town x Greys Free Style) including the $2.50 favourite Moreira (x Donna Ricca).

Breeding of the Easter Egg finalists:

Mitcharlie Mia was trying to emulate the feat of her sire Don’t Knocka Him who won the race in 2012, and Dawkins Bale was trying to go one better than 2015 when he finished second behind his recently retired “millionaire” kennel mate, Fernando Bale.
Fernando Bale came from box eight when he won in 2015, with Dawkins Bale coming from box one, but worth recalling trainer, Andrea Dailly, did win the race in 2013 with Grigorieva Bale who started from box four.