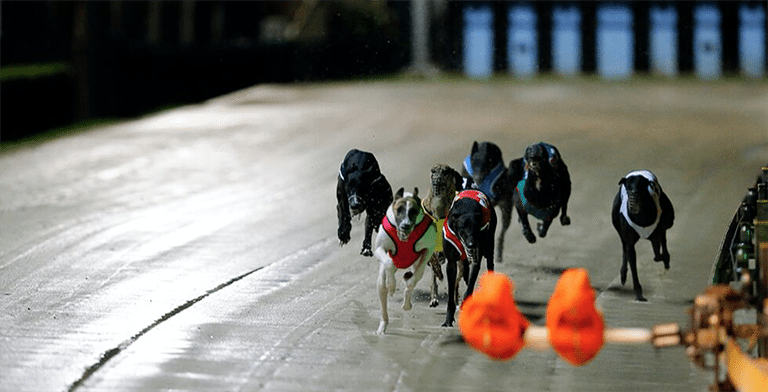 TOPPER Teretto gave nothing else a look in when registering a top-notch triumph in the final heat of the Group 1 Golden Easter Egg at Wentworth Park on Saturday night.

Jumping from box seven, the Anthony Azzopardi-prepared chaser fired straight to the front of the pack, leading by three lengths on the first turn.

Full of running out in front there was no catching the son of Collision and Cadence which crossed the line seven lengths clear of Almost Black and Daithy Allen in a slick 29.81.

Drawn out wide in box eight, Falcon’s Fury had no trouble crossing the field, slipping into top gear once on the bunny.

Out in front it was a case of times and margins, with Falcon’s Fury defeating Srixon (box seven) and Aqua Cheetah (box four) to clock a fast 29.71.

It was Falcon’s Fury’s first start since finishing at the tail of the field in the Group 2 Maitland Cup 10 days prior, with the Paul Braddon-trained dog relishing being back in the Harbour City where he has now won five races from seven starts.

Nangar Bear has produced a career best run to win the eighth heat of the Group 1 Golden Easter Egg on Saturday night at Wentworth Park.

Stepping from box one, the Dennis Barnes-trained dog bounced straight on the bunny, leading in the early stages over One Thing (box six) and Mumma Josie (box eight).

In the charge around the first turn, race favourite Ritza Lenny (box three) had railed into second position, however he was still spotting the leader a massive margin.

Around the home turn Nangar Bear was in a race of his own, cruising to the line to score by six-and-a-half-lengths in a flying 29.71.

ROYAL Turbo proved too classy for his rivals on Saturday night when taking out heat seven of the Group 1 Golden Easter Egg.

Jumping from box one, Royal Turbo was beaten for speed by Pedro Cerrano (box two) in the early stages but was able to muster pace and rail through to take up the top spot around the first turn.

Once out in front Royal Turbo never really looked in danger, defeating a fast finishing Ando’s Mac (box five) and Pedro Cerrano in 30.05.

Trained at Agnes Banks by Glen McKinley, Royal Turbo is a son of Swift Fancy and Addiction and has now won 10 of his 21 starts including five over the track and trip at Wentworth Park.

STAR Torana caused a boilover in the sixth heat of the Group 1 Golden Easter Egg on Saturday night, defeating a high-class field to book her spot in next week’s semi-finals.

Jumping from box seven as a 30/1 shot, Star Torana carved across from the outside as the field packed tight around the first turn, taking the lead on the inside of race favourite Aston Dee Bee (box eight).

Through the catching pen the two leaders came together, causing Aston Dee Bee to drop back as Star Torana sprinted clear.

Taking full advantage of box one was another roughie, Full Of Rust, but the brindle dog was no match for the winner which powered to the line to record her 20th career victory in 30.09.

STRIKER Light will remain in contention for another group 1 title at Wentworth Park after a scintillating victory in the fifth heat of the Golden Easter Egg on Saturday night.

The winner of the 2017 Group 1 National Futurity, Striker Light was brilliantly away from box two, leading clearly over She’s Grand (box five) and Lucky Chap (box eight) in the run to the line on the first occasion.

Through the catching pen, Striker Light kicked away from her opponents, with Lucky Chap slipping into second spot and taking off in pursuit of the leader.

Despite the best efforts of Lucky Chap, Striker Light proved too slick at the finish, recording a blistering 29.67.

Trained by Brett Bravo, Striker Light is now a winner of 11 of her 18 starts, with her finishing time a new personal best over the track and trip at Wentworth Park.

WICKED Warrior has gotten up in the last stride to score a thrilling win in heat four of the Golden Easter Egg at Wentworth Park.

Jumping from box one, the Jason Magri-trained dog was only fairly into stride, with Gosford Cup winner Barking Bad (box seven) taking control of the race in the run through the catching pen.

Following him across from out wide was Big Flood (box eight) which managed to get nearly a length in front down the back straight, but Barking Bad gave him the hip and shoulder to once again assume the top spot.

Meanwhile, Wicked Warrior had weaved his way into third spot and was quickly closing in on the leading pair, railing underneath Big Flood coming off the back before switching to the outside in the run around the home turn.

Down the straight Wicked Warrior and Barking Bad went stride for stride, with the former doing enough to get the win, clocking 29.99.

ANDREA Dailly has one through to the semi-finals of the Group 1 Golden Easter Egg, with Shima Song scoring a determined victory from box five on Saturday night.

When the lids flew open, Hugo Boss (box four) rolled forward to take the early lead, leading over his half sister Lagoon Jazzy (box two) as Shima Song slipped into third through the first turn.

The first three stayed unchanged down the back straight, but swinging around the home turn Shima Song began working hard, hooking down the outside and storming down the centre of the track.

UP Hill Jill bounced back to her brilliant best when taking out the second heat of the Group 1 Golden Easter Egg.

Trained in Victoria by David Geall, the daughter of Premier Fantasy and Where’s Demonica was only fairly away from box three, but managed to muster plenty of pace in the run to the first turn, railing through to lead over Magic Spring (box eight) and Black Hole Sun (box two).

Down the back the Group 2 Laurels winner was in a race of her own, stretching out to score by two-and-one-quarter lengths over Black Hole Sun in a nippy 29.82.

MACK Tux put in a flawless display to score in the opening heat of the Group 1 Golden Easter Egg (520m) at Wentworth Park on Saturday night.

Stepping from box seven, the black dog exploded from the traps, carving across from out wide to go straight to the early lead. Slipping straight into second spot was WA star Astrozone (box two) which loomed ominously throughout the majority of the event, but in the run to the line Mack Tux kicked on strongly, clocking a fast 29.78.

Astrozone will improve after a look at the track, finishing second, whilst second reserve Fimple Allen (box three) rounded out the trifecta back in third.