Greyhound Racing SA (GRSA) is set to deliver a new style of racing to punters this May.

Starting May 2, GRSA will commence a trial of G-SIX racing at Angle Park, Gawler and Mount Gambier.

G-SIX racing involves six-dog fields being drawn as the norm for those venues through until the end of July. The new format of racing mirrors the traditional approach at English tracks but with the additional appeal of dogs being more generously spaced at box-rise.

GRSA stated that: “in a constantly evolving market, and having regard for different wagering client needs, this change reflects a willingness by GRSA to challenge traditional thinking and explore new approaches to the delivery of its racing product.”

How G-SIX racing works:
– Maximum of 6 dogs in each race
– Vacancies in the ‘3’ and ‘6’ alleys
– The 6 dogs will utilise the rug colour which correlates to their box draw – ie red, black/white stripes, blue, yellow, black, pink
– The two reserves will be numbered 9 and 10 and carry the standard rug colours for reserves 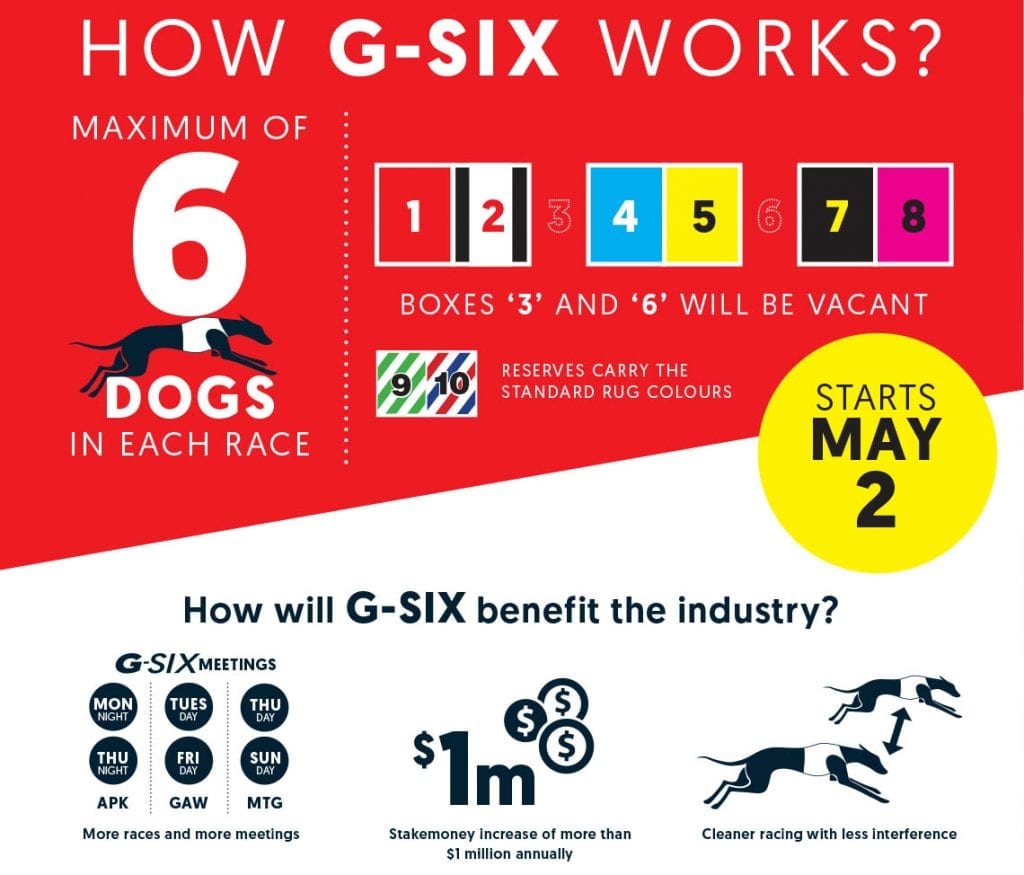 GRSA says the trial format has been made possible with the assistance of Tabcorp.

Tabcorp General Manager of Wagering, VIC, TAS, SA, NT, Trevor Parkes said: “GRSA is a key partner of TAB and greyhound racing is an exciting sport within the Australian entertainment landscape. We have supported the trial of 6 dog races with scheduling on Sky Racing and looking forward to seeing how participants and punters respond to G-SIX racing.”

GRSA Chairman Grantley Stevens is just one of those expecting the concept to be a game-changer in Australia.

“In this instance, less really does amount to more. The G-SIX initiative will allow us to run more race meetings and more races on each card.

“Participants will race for the same stakes, but more often, and wagering clients will be offered more choice. South Australia is a proud innovator and one which believes in pushing the boundaries as a driver of positive change.”