The October long weekend always promises to be a memorable one at Coonamble Greyhound Club, with the running of the annual Maiden series, with $10,000 presented to winning connections on Monday afternoon.

Thirteen heats were conducted on Saturday afternoon; with some brilliant first-up performances include debutant Spring James, who recorded a fast time of 17.42 over the 301m distance. Trainer Gregory Board made every second of his four-hour trip from Orange worth it, successful with three of his four starters and a second placing. Spring Marcus will join Spring James in the final, after clocking a smart time of 17.68 in heat one.

South Penrith trainer Michael Hodges also had a memorable afternoon, with two impressive winners making Monday’s final and Dance On Air clocking the next best of the day in 17.63. Set It Off will also represent the Hodges kennel in the final, with a strong heat win clocking 17.65. Other heat winners included Lady Jay for Karen Sanderson (17.67), Duck Down Valley for Desmond Winter (17.71), Freak Show for Terry Callen (17.71), Head High for Dave Pringle (17.73), Just Missed for Shannon Ellis (17.76), Spring Major for Gregory Board (17.79), Local Fatboy for Michael Hodges (17.83), Lorian Bolt for Barry Coyte (17.95) and Nosey Morgan for Byron Phillips (18.07).

The weekend’s proceedings kicked off on Friday with two non-tab meetings in the morning and another at night. A huge crowd was in attendance to witness three heats of the Multicam Routers 530m series, with Dave Pringle’s Grader Jack recording a sizzling time of 30.55.

Friday evening’s meeting saw two heats of the 21st Century Meats run and won over the 400m, with Dennis Barnes chaser Rockin’ Fancy the fastest heat winner in a time of 23.16. The beautifully bred son of Spring Gun and Flash Fancy recorded his third win from start number five and will be very hard to beat in Monday’s $2,000 final.

Two heats of the www.australianracinggreyhound.com series for greyhounds with no more than five career wins were held over 530m, with Dennis Barnes successful once again. Fancy Lola clocked a brilliant time of 30.51, giving the Cudal trainer another strong chance of taking out the final worth $2,000 to the winner.

Six best eight races were conducted on Friday, with Most Arrogant for Len Haaring taking out the $1,000 Tony Reilly Memorial Final in 17.59, recording her fourteenth career win. Dennis Barnes notched up another winner with All Too Fancy victorious in the Coonamble Bowling Club Final over 400m, worth $1,000, whilst Allen Ivers took out the second Coonamble Bowling Club Final over 530m with She’s Ayce, and collected $500 in prizemoney. The final two races of the day saw Sapphire Madam for Shannon Ellis take out the Heikens Supa IGA Final over 301m in 17.52 and Wiley Warhorse triumphant for Kevin Buckley in the Terminus Hotel Final in 23.36, with both trainers collecting $500 for their efforts.

Saturday morning’s meeting included the running of the Rocky Ridge Farm Final over 400m, with first reserve Uniting Cargo saluting for trainer Ron Steel in 23.50. Two heats of the $2,000 Coonamble Shire Council Cup were also conducted over 301m for greyhounds with one to five wins, with Peter Dunne’s Never Looked clocking the fastest heat time of 17.59. Four heats of the Woy Woy Poultry Super Maiden Series were also run and won with He’s Zarr Badger for Colin Miller recording the fastest time over the 400m of 23.10.

Racing will recommence on Monday morning at 9am, with all the big finals to be decided in the afternoon, starting at 1pm.

Below are some snapshots from a packed Coonamble Carnival on day one. Thanks to Terry Callen! 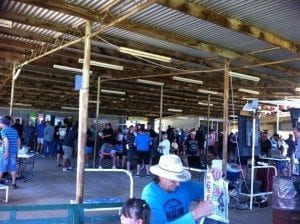 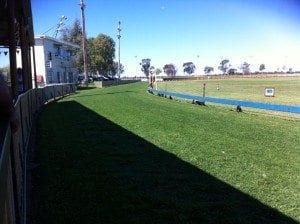