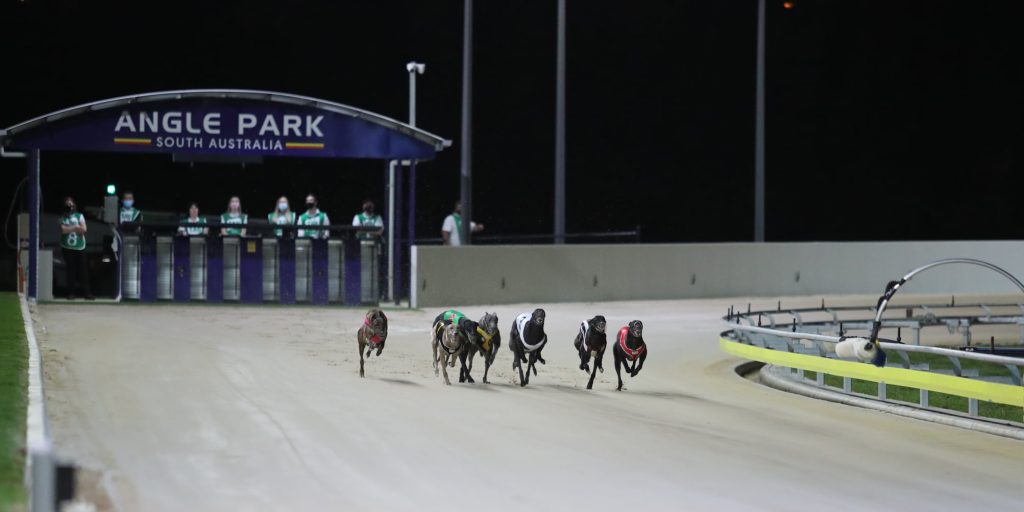 The novel nature of The Phoenix has to be a major highlight of the year, not just because of the cash but due to the extraordinary run by winner Wow She’s Fast (My Bro Fabio x Fair of Face).

Not yet two years old, this thumping 31.5kg bitch got away much as expected, mildly edging out Koblenz (8) on the way around the first turn and heading out after leader Spotted Elk. But I can’t remember a racer then pouring on so much mid-race power and running away from the field in the run home. That was breathtaking.

Koblenz’ early speed was a fraction below its best while favourite Aston Rupee (5) never got into the race from the squeeze box.

What was equally interesting was the Watchdog’s prediction:

“Very intriguing race, however I’m banking on KOBLENZ (8) doing what he does best, and that is jump and run. He is one of the best beginners in the game and with the inside and middle division expected to bunch through the bend, he could be off and gone as they head to the back”.

This misses the key factor in Meadows sprints; to lead from the outside boxes is a daunting proposition, especially in a top level race. The dog has to jump well clear to avoid giving way to inside dogs which gain an extra advantage due to the circular nature of the layout (quite different from Sandown, for example, which is more cigar shaped). On paper, Koblenz had some chance of doing that, but not this time. (Incidentally, Meadows worst box is actually #3, suggesting a compression as outside dogs push over, followed by 7, 6 and 8).

This should grab the attention of GRV people who claim they will be looking at both city tracks with improvements in mind. Over its life Meadows has tried several minor changes to its sprinting trip but none have really helped. It’s the shape of the turn, folks.

The fix is a bit like trying to modernise an old Collins submarine. You can always fiddle here and there but, in the end, you can’t make it run faster. You have to go back to scratch and start again. That’s what happened at Angle Park which is really good now, and so is the new Cannington track. Grafton is another good example. Not so at Wentworth Park, which has never worked, or at Albion Park which was crowded in by the trots and compromised from the start. Launceston has never been satisfactory from the beginning due to the silly cutaway first turn. Sometimes a stick of dynamite is the way to go.

While on this subject, it’s been intriguing to see speeds in km/hr posted on some city races as the dogs go about their business. They get up to the mid 60s in the back straight, declining to the high 50s in the run home. All very well but what do you do with this information, what does it tell you and who prompted it? (Was it UTS again?).

I have been analysing race data for more years than I can remember but I can’t for a minute see how this stuff would help. Times are a help, yes. Interference, yes. Running styles, yes. Boxes, yes. But how would actual speeds help with predictions or with track design? I put it in the same category as run-home times – good for bar talk but that’s all.

Back in 2016 you might remember a regular critic, “Hugh”, was often writing in to complain about greyhound racing of any description. He just does not like people making money out of animals, which his privilege, of course. In doing that, he outlined a number of objections and so I plucked out three of them here to illustrate where we stand.

This is done not so much to shoot him down as it is to highlight areas where the industry has to be on the ball – or preferably ahead of it. His quotes and my comments are set out below.

Hugh:“Greyhounds don’t get the choice to opt out, they perform, or they die, or if they’re lucky they get adopted”.

This may have been arguable in part in years gone by but no longer is it possible. Big advances in rules about breeding and lifetime care are now universal and strictly applied. In any event, much of the data used by the Special Commission in NSW was faulty and euthanasia rates were grossly overstated.

“Mechanical hare racing is a very recent phenomenon but it has served one special purpose: it has almost certainly sustained the continuation of the breed, as well as its general purity”.

This was my own thought but Hugh generally rubbished it, which indicates he is not aware of the underlying issues. There are two main ones.

First, a breed of any description will be sustained if humans place value on it. Greyhounds, like most dogs, have a close relationship with humans, one that is enjoyed by both parties, and they are usually trainable. But the greyhound is also geared to chase after prey. It is in their genes and they have been employing it for millennia. Without that quality, greyhound racing, or its predecessors (eg searching out small animals for its medieval masters or guarding SA farmers from kangaroo damage) would not be practicable. Today, they love getting ready for the track and know exactly what is involved when they get there. Just watch them as they arrive.

Secondly, there is little doubt (notwithstanding contrary some arguments) that the greyhound has remained completely or mostly pure in its heredity due entirely to its close association with its owners – typically people of high standing in the community including many of royal blood (eg Prince Albert, consort of Queen Victoria, was one). Trading in greyhound stock has always been under pretty good control.

Without those values it is arguable that the greyhound would not be in its preferred position today.

Comparable examples would be retrievers rushing out to haul in downed birds, bloodhounds tracking criminals through the bush, kelpies cornering a flock of sheep, labradors showing the blind how to get around. In all these cases, the dog is doing what comes naturally, and is happy doing it. It is also something that is valued by humans who therefore place a high value on those animals.

Hugh:“All breeds of dogs were bred from wolves via artificial selection by humans. Where is the intrinsic value in a given breed of dog?”

Not totally true as wolf progeny tended to vary over centuries due to a combination of their environments, their opponents and the interest taken by humans. In some cases (eg Henry VIII reign) it was law that courtiers should first qualify as greyhound masters/trainers. Certainly, people have bred away from the greyhound – eg the Italian (mini) Greyhound – but not to it. The greyhound’s apparent purity also contrasts with current fashions which churn out curious mixtures, all of which tend to have shorter lifetimes and often extra health problems.

These examples illustrate the sort of qualities that the greyhound industry needs to convey to the public. That will not happen automatically. The story has to be well framed and the key points highlighted:

The last few years have seen many advances in the Masters/Veterans category. It is surely the most sensible and economically sound move ever taken by greyhound authorities. It not only offers the opportunity to increase lifetime earnings but also eases the burden of looking after aging dogs.

Not all clubs were in favour of the move initially, reasoning that dogs were less keen by that stage. However, it is plain that, injuries permitting, lots are eager to continue with what they know – chasing the bunny. Ideally, more effort should go into this category as it seems to have latent growth potential.

Just looking at the last several days across the country, we find that some 30% of meetings did include a Veterans’ event. Funny though, there were zero such races in Victoria which was really the initiator of races for oldies in the first place. No doubt a longer survey would show more involvement.

Leaving out Victoria, there were Veterans races in 43% of meetings. Queensland clubs were easily the most frequent supporters.

For the future, clubs might consider that we are talking about experienced dogs with well declared form. As such, it’s likely that punters will favour them over fresh faced newcomers entered in added prize money series where wild guesses have to be in play to pick a winner. Sure, we know owners/trainers like those maidens (for the early cash) but the overall product would be better rounded if we trimmed some of the rewards for youngsters and gave it to the oldies.

My office window looks out onto a four lane main road together with big numbers of joggers, bikers, exercising oldies and folks off to work on the busy footpaths.

A year ago, a tall statuesque young blonde began appearing at speed around 8:30 every morning, tugged along by a large black greyhound. Hardly missed a day. Then, mid-year she disappeared but returned some three months later – both girl and dog looking great but now joined by a babe in a stroller. So that’s now two people added to the greyhound fraternity. We do have a future.