She is from a very good litter, of nine named, which included Billy’s Shelby, Danger Is Sweet, Hailstorm Billy, Hidden Hawk, Planet Waves, Set Sail South, Supersonic Hawk and Vintage Euphoria, with their dam only having one other named offspring on file, Cyclone Shelby, who was whelped in March 2010 by Collision.

She has five named offspring on file, Clear Sense, Deadly Origin, Emerald Drive, Kilty Drive and Open Mind, who were whelped in April 2014, by Kilty Lad, and she also has a litter of six dogs and five bitches on file, whelped in February 2015, by Don Chendo. 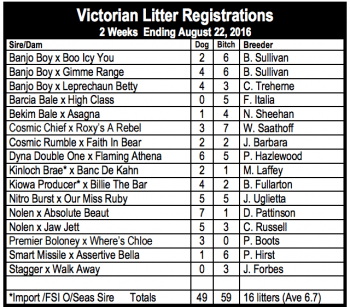 She is from a litter which included, Angel Millie, Munta, Prince Holyfield, Ritza Angel and Token Spinner, with their dam also producing some very good winners from her March 2009 litter by Spiral Nakita*, and has two other litters on file, by Bombastic Shiraz and Lonesome Cry*.

Leprechaun Betty raced 28 times for three wins and seven placings, winning over 525 metres at The Meadows (30.49), where she also won twice over 600 metres (34.76) and worth noting she was also placed over 515 metres at Sandown.

She is from a litter of three named, which included Elite Runner and Rebel Commander, with their dam’s only other litter on file, whelped in January 2010 by El Galo, having two named, With Love and Gizmo Gadget.

Eleven for Double One

HEATHCOTE breeder, Peter Hazlewood, has a beautifully bred litter of 11 pups on the list this week by recently crowned AGRA Greyhound of the Year, Dyna Double One (March 2013 Barcia Bale x Crystin Bale).

Their dam, Flaming Nikita, also produced good winners from two litters by Big Daddy Cool, whelped in December 2007 and December 2010, a September 2011 litter by Where’s Pedro, and a January 2013 litter by College Causeway*.

Flaming Athena has two named offspring on file from her first litter, Cailah Rose and Cailah Shakey, who were whelped in March 2015, by Shakey Jakey, and who are not far off hitting the track.

Flaming Athena certainly has the pedigree to make a name for herself as a brood bitch, with her dam producing so many very well bred winners.

OUR final litter for review from the Victorian list this week, has ten pups by the under-rated sire Nitro Burst (October 2006 Bombastic Shiraz x Hotshot), who is currently in 12th place on the Victorian Metropolitan Sires list, also included in this week’s Talking Breeding, with 36 wins for the eight months to the end of August, from 20 individual winners.

She is from her dam’s only litter, which included Commander Dino, Miss Telebela, Rosetta Caprici, Rosetta’s Junior and Shannon Capricio. 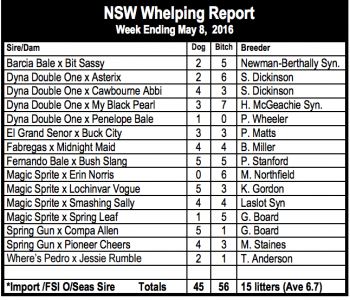 The Newman-Berthally Syndicate from Padstow, registered the litter of two dogs and five bitches, who are from the beautifully bred bitch, Bit Sassy (May 2010 Bit Chili x Meredith Grey), whose dam is by Big Daddy Cool x Thai Again (Token Prince x Thai Magic), and worth recalling, Thai Magic is by Grove Whisper* x Lauren’s Desire.

Bit Sassy is from a handy litter, which included Dinkum, Itsa Lifestyle, Little Grey, Montanus, Switch Up and Tian Hao Jewel, with their dam also producing winners from litters by El Grand Senor and Fabregas and also having two litters with one named from each, by Magic Sprite and Paddy’s Flame.

She is already a proven producer, with winners from the six named offspring from her first litter, whelped in April 2014 by Where’s Pedro, which produced, Bit Wicked, Tiarama, Wicked Jenmar, Wicked Pedro, Wicked Sassy and Wicked Warrior.

CUDAL breeder, Benjamin Miller, has a nice litter of eight pups on the list this week, by 2012 National Sprint Championship winner, Fabregas (October 2010 Bombastic Shiraz x Wicked Witch) who is now an Australia wide stud success and he only turns six years of age next month.

She is from a handy litter, which included Midnight Maneuva, Midnight Nan, Midnight Rumour, Midnight Scandal, Three Rivers and Tribal Beat, with their dam also producing winners from each of her five other litters, by Barcia Bale, Bombastic Shiraz, Brett Lee, Buck Fever and Collision.

WALLERANG breeder, Peter Stanford, has a litter of five dogs and five bitches on the list this week by 2015-16 Victorian Greyhound of the Year, Fernando Bale (March 2013 Kelsos Fusileer* x Chloe Allen).

Kiacatoo Pearl also produced winners from her two other litters, whelped in September 2011 by El Grand Senor and May 2012 by Collision, which included the outstanding sprinter Shakey Jakey, now standing at stud.

Buck Fever has come to breeder’s attention in recent months with some outstanding performances by Buck Forty and Burn One Down, from his January 2014 litter out of Fancy Jaffa (November 2007 Collision x Flash Fancy).

Bush Slang is a proven producer, with winners from both of her first two litters, whelped in October 2012 by Collision and December 2014 by Fabregas.

Orange breeder, Greg Board, has the first of his two litters, five dogs and one bitch, from the well bred bitch Compa Allen (March 2012 Collide x Jamison Bale), whose dam is by Bond x Tannice Bale (Head Honcho x Jindara Bale) and worth recalling, Jindara Bale is another successful brood bitch by Grove Whisper*, from Star Lee.

Spring Leaf is from a litter which included Spring Jade, Spring Tyrant, Trigger It, Spring Ellie and Spring Emporer, with their dam, Scarlett Cath’s only other litter on file, whelped in April 2013, by Collision, producing Spring Ales, Spring Bluestone, Spring Puzzle and Spring Twig. 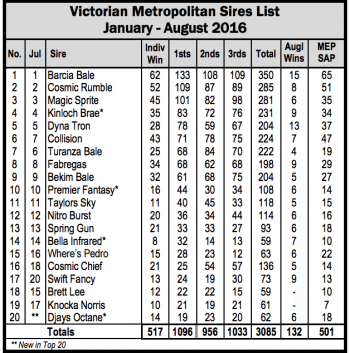 BELLA VITALI (Brindle bitch, May 2013 Collision x Domino Vitali) Lightly raced bitch, trained at Pearcedale by Geoff Howell, who has only had 22 starts for two wins and six placings. Good second over 520 metres at Cranbourne on August 26, before fifth there the following week, then seventh from box 8 over 515 metres SAP September 11 when she could not get across before the bend, beaten 10.5 lengths in the race won by Dewana Express (30.01) with the placegetters coming from boxes one, two and three. Has plenty of ability but maybe better suited back at the provincials.

HOOF IT (Black dog, January 2014 Lochinvar Marlow x Isseymiyake) Trained by Christopher Watson at Drouin West. 18 starts for three wins and five placings. Fourth Sandown 515 metres August 16 before winning over 525 metres at Traralgon on September 5, then last start fifth, box one, SAP September 11, beaten 7.7 lengths in the race won by Tuffy Bale (29.78). Always thereabouts and not far off another win based on that Sandown run.