She is from a 100% winning litter of six named, which included Madi Monster, Mepunga Armagh, Mepunga Fearon, Mepunga Marsha and Whatta Brew.

Their dam, Mepunga Harmony also produced winners from her three other litters, whelped in June 2012 by Bekim Bale, March 2013 by Fear Zafonic* and December 2013 by Barcia Bale. 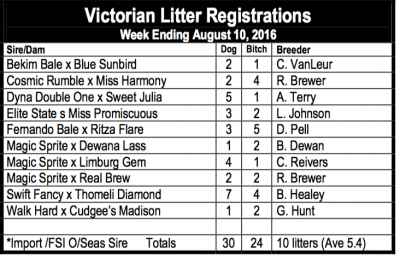 NEXT we have a litter of six pups by the recently retired, champion sprinter, Dyna Double One (March 2013 Barcia Bale x Crystin Bale), who was crowned 2015-16 AGRA Australian Greyhound Of The Year during the recent National series in South Australia.

Sweet Julia is from a litter of only two named, which included Renman, with their dam producing a long list of good winners from her six other litters, by Black Enforcer, Bombastic Shiraz, Elgrando, Time Fly’s and Waterview Star, for a total of 31 named offspring from seven litters.

She is already a proven producer with winners from both of her litters, Julia Fly’s was the only pup in her first litter, whelped in April 2012 by Time Fly’s), who raced 78 times for 12 wins and 28 placings, then all three named in her August 2013 litter by Kinloch Brae* won good races, Gardsman, Lawman and Spokesman, with those first two litters bred by Karen Leek at Devon Meadows.

NOT too many litters around these days by the outstanding sire, Elite State (April 2001 Just The Best x Spark Again) but he has a litter of five pups on the list this week, registered by Dennington breeder, Leslie Johnson.

She is from a litter which included Closing Speed, Drill And Blast, Greysynd Rush, Lara Bingle, Mr. Trixstar and Super Bingle, with their dam, Elle Bingle having two other litters on file, whelped in December 2007 by Surf Lorian, with one named, and September 2009 by Bombastic Shiraz, with five named.

She has two named offspring, Mr. Prom and Okay Alpha, from her January 2014 litter of three dogs and two bitches, by Barcia Bale, with an early win from Okay Alpha.

TOOLLEEN breeder, Daniel Pell, has a nice litter of eight pups on the list this by the recently crowned Victorian Greyhound Of The Year, Fernando Bale (March 2013 Kelsos Fusileer* x Chloe Allen).

She is from a handy litter which included, Flame, Midnight Snapper, Ritza Franky, Ritza Mitza, Ritza Night, Ritza Ryder and Wild Midnight, with their dam, Midnight Flare, also producing winners from her four other litters, whelped in August 2010 by Brett Lee, November 2011 by Bombastic Shiraz, February 2013 by Nitro Burst and June 2014 by Bella Infrared*.

She is a proven producer, with winners from her first litter, of nine named, whelped in August 2014 by Collision, then she whelped a litter of three dogs and seven bitches, by Turanza Bale, in March 2015.

She is from an excellent litter, which included Fantasy Diamond, Mepunga Fantasy, Mepunga Geordie, Mepunga Nicky, Mepunga Premier, Talanjee Magpie and Zimmer, with their dam also producing good winners from her two other litters, whelped in August 2008 by Bombastic Shiraz and April 2010 by Big Daddy Cool. 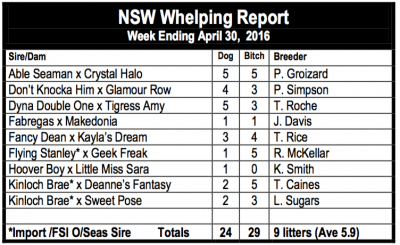 TURNING our attention to the NSW Whelping Report for the week ending April 30, our first litter for review is one of 10 pups by the little used, well bred sire, Able Seaman (April 2009 Over Flo x Dyante Gee), whose dam is by Kobble Creek (Gun Law Osti x Trojan Tears), from Gemma Gee (Ben’s Perfection x Our Legend).

Registered by Kearsley breeder Patricia Groizard, the five dogs and five bitches in the litter, are from the well bred bitch, Crystal Halo (October 2011 Elite State x Its Shine Maybe), whose dam is by Bit Chili x She Be Nimble (Silent Emotion x Nimble Queen).

She is from her dam’s only litter of four named, which included Bourke And Wills, Mister Defusion and Points North, and on the track she raced 41 times for six wins and nine placings, winning five times over 365 metres at Nowra (21.04) and also over 297 metres at Dapto (17.66).

Her first litter, whelped in December 2013 by Swift Fancy, has five named, Blue Dream, Calm Dream, Kayla Rossa, Peaceful Dream and You’re Dreaming, all winners, then she has a litter of four dogs, whelped in November 2014 by Glen Gallon.

NEXT we have a litter of six pups, registered by Lewiston breeder, Robyn McKellar, by the successful US sire, Flying Stanley* (January 2005 Kiowa Sweet Trey x Flying Rimes).

Geek Freak is from a litter of three named, which included Like A Bomb and Osti’s Moment, with their dam producing winners from her five other litters, by Collision, Go Wild Teddy, Hallucinate, Premier Fantasy* and Where’s Pedro.

She has one named offspring, Dashing Geek, whelped in April 2014, then she whelped a litter of two dogs and two bitches in April 2015, by Barcia Bale.

She is from a litter which included, Harper Rose, Noble Fantasy, Premier Dancer, Premier Mozz, Stitch Up, Tuktu and Watch Out Traps, with their dam also producing winners from each of her four other litters, by Cosmic Rumble, Kinloch Brae*, Lochinvar Marlow and Tuiaki.

She has one previous litter on file, with six dogs and two bitches, whelped in July 2015, by Just The Best.

AGRA Australian Greyhound of the Year

It was a night of nights on the National scene with Delegates and club members coming together from all over Australia to celebrate the AGRA Awards night.

The Awards night now takes place with the National Championships in August each year. It was another night to remember and a glittering affair. Each State that has staged the event since 2006, have gone to great lengths to put on an outstanding show, with GRSA no exception.

The winner was selected by panel of judges consisting of administrators and media representatives from each state. The panel was asked to allocate votes 3, 2 and 1 to the three finalists in order of each judge’s preference in a secret vote.

Accepting the award from GRSA’s Chairman Michael Fabbro, Paul & Jan Wheeler accepted the award on behalf of their son Brendan the owner of Dyna Double One. They remarked on what a fantastic experience it had been for the Wheeler family following the fortunes of Dyna Double One throughout the year. His battles with kennelmate Fernando Bale had been sensational, with Dyna Double One taking the upper hand in the Melbourne Cup final, followed by more Group 1 wins with his famous kennelmate on the sidelines and retired.

DDO had travelled far and wide competing in many major group events throughout the year thrilling crowds where ever he racing and had truly become the sports pin up dog with enormous popularity particularly in his home state of Victoria where he did most of his racing. 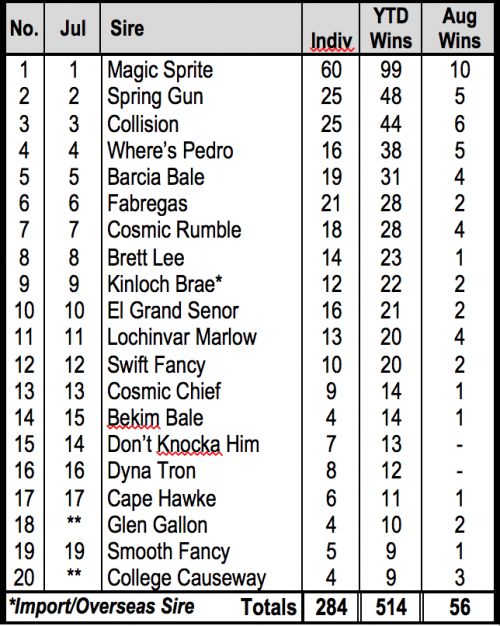 OUTSTANDING stud success, Magic Sprite (March 2008 Brett Lee x Glamorous) exerted his authority again in August, with another 10 Wentworth Park wins taking his total to 99 for the eight months to the end of August.

He leads the race to the 2016 Premier NSW Metroplotan Sires title by 51 wins over second placed, Spring Gun who has 48 wins, followed by Collision with 44 wins, Where’s Pedro with 38 wins, and Barcia Bale with 31 wins completing the top five.

Just outside the top 20 at the end of August with eight wins each are Oaks Road, Turanza Bale, Big Daddy Cool and Surf Lorian, who are followed on seven wins by Dyna Lachlan, six wins each by Nitro Burst and Premier Fantasy*, then five wins each by Fear Zafonic*, Goodesy, Mogambo, Sure as and Miagi.

PRODIGAL SON (Black dog, June 2014 Collision x Wynburn Diamond). Trained at Tooradin by Jodie Selleck. Eleven starts for 1-1-2 in Tasmania before coming to Victoria where his first start, over 515 metres at Sandown (SAP) September 4, from box four, saw him beaten nine lengths in the race won by Tinker Bob (29.79) who won by five lengths. Previous four starts in Tasmania before coming over resulted in a 461 metres Hobart win and a 600 metres placing at Launceston. Has plenty of ability and still maturing.

JOE MAMA (Black dog, July 2014 Bekim Bale x One Kay). Trained at Botanic Ridge by Graham Nicoll. Five starts for two placings, Healesville 350 metres, then The Meadows 525 metres (MEP) and fifth over 525 metres at The Meadows, before finishing fifth over 515 metres at Sandown (SAP) on September 4. From box three he was only beaten 3.24 lengths in the race won by Little Miss Emm (30.42). Sure to improve with more experience.

NEXT week we will have the Victorian Metropolitan Sires list for the eight months to the end of August and our usual review of litters, from Victoria and New South Wales, along with any news that comes in through the Mailbag.

I think it’s disgusting that the horse racing authorities can name their lot after a champion greyhound hall of famer.