Their dam, Girl Aloud, also has good winners on file from each of her three other litters with named offspring, whelped in May 2012 by Vee Man Vane, March 2013 by El Galo and August 2014 by Fabregas.

She is already a proven producer, from her first litter, whelped in August 2014 by Banjo Boy, which produced Banjo King, Banjo Zip, Kiewa Drive, Lady Banjo, Lonnies Banjo and Power Burn, then she has a litter of three dogs and six bitches on file, whelped in May 2015 by Barcia Bale, so she certainly has some very well bred youngsters on the ground.

Her dam, Girl Aloud has winners on file from each of her four litters with named offspring, whelped in December 2010 by Mogambo, May 2012 by Vee Man Vane, March 2013 by El Galo and August 2014 by Fabregas. 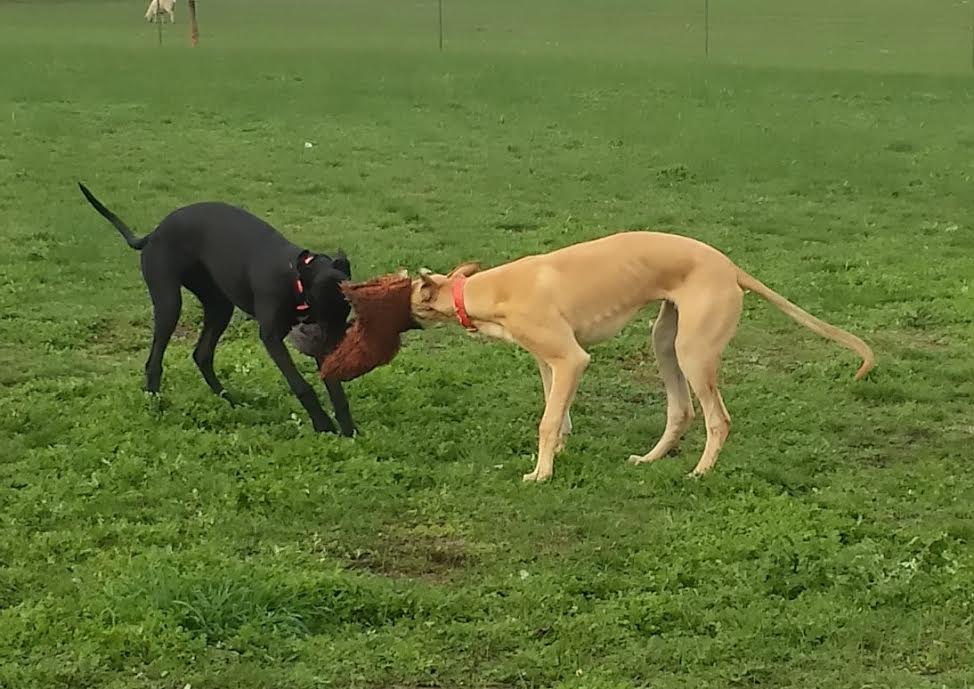 Two of the pups from Athos x Zoenah’s Entity do battle over a pillow.

Athos is from a litter which included Coup De Vent, Milady De Winter and Windy Spur, with their dam, also producing winners from her only other litter, whelped in December 2010 by Black Enforcer, which produced Kayla’s Penny, King Enforcer, Monaleen Flyer and Monaleen Moons.

Athos is probably the closest bloodline to Turanza Bale available at stud in Australia today and I am a little surprised he has not received more attention from breeders, with his impeccable bloodlines and the versatility he showed during his track career.

Combine that with the winning bloodlines of Zoenah’s Entity and her dam Girl Aloud and the outstanding pedigree of Athos and these well bred youngsters should create enormous interest amongst potential buyers with future breeding in mind.

Well done Richard, and thanks for the photos of the pups, I for one will be watching their progress with great anticipation, and I will also be interested to see if Athos gets a few more bitches in the coming months as breeders become more aware of his impeccable pedigree. 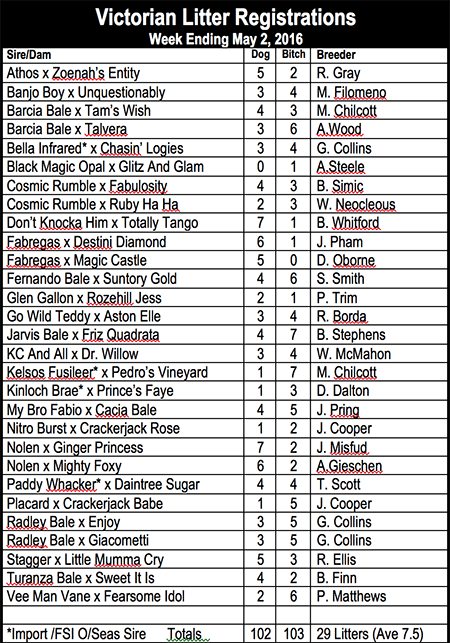 Tam’s Wish is from a litter which included Go Jetta Go, Hillview Bart, Oneza, Pedro’s Vineyard, Stutter and Thanks Louise, with their dam also having winners on file from her only other litter, whelped in February 2010 by Paddy’s Flame.

According to my breeding records she has one previous litter on file, two dogs and five bitches, whelped in May 2015 by 2010 Australian Cup winner Dyna Lachlan.

The dam of the litter is Pedro’s Vineyard (October 2011 Where’s Pedro x Miss Merlot) litter sister to Tam’s Wish, dam of the first litter in this review.

NEXT we have a nice litter of seven pups, registered by Wattle Flat breeder, Geoff Collins, by the highly rated US sire Bella Infrared* (July 2009 Kiowa Mon Manny x Bella Ionic) who is currently having success here with four individual winners from his March 2014 litter from Fyna Bale, which produced Demon Bale, Eren Bale, Felton Bale and Helma Bale, all metropolitan winners who have won 14 races between them so far this year.

EIGHT pups in our final litter for review from the Victorian list this week, by another Golden Easter Egg winner, Don’t Knocka Him (November 2009 Knocka Norris x Surf Queen).

She is from a litter which included Arcadia Fantasy, Arcadia Hawk, Fantasizing, Premier Magpie and Premier Pizazz, with their dam also producing winners from her two other litters, whelped in November 2006 by Schwartzanager and January 2009 by Paddy’s Flame.

On the track she raced 46 times for 12 wins and ten placings, winning five times over 515m at Angle Park (29.80) where she also won twice over 600m (35.23) and won four times over 520m at Cranbourne (30.53, with a single win over 460m at Warragul (26.18).
According to my breeding records she has one previous litter on file, four dogs and six bitches, whelped in September 2014 by National Sprint Championship winner, Fabregas. 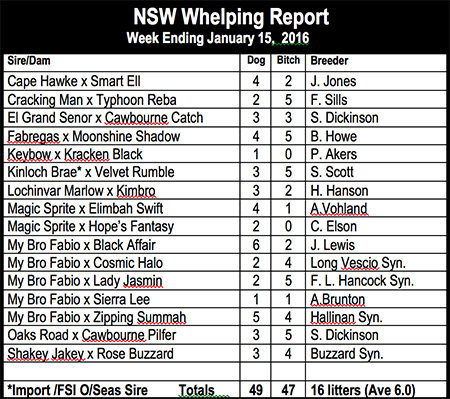 Typhoon Reba is from a litter of four named, which included Rain Chief, Typhoon Hank and Typhoon Walter, with their dam only having one other litter on file, with six named, whelped in January 2014 by Kniloch Brae*.

She is from a litter of three named, which included Billionaire and Blitz To Excel, with their dam also producing winners from her five other litters, by Big Daddy Cool, Brett Lee, Cawbourne Frank, Elite State and In For Life.

On the track she did all of her racing in New Zealand, where she raced 30 times for three wins and four placings, winning twice over 295m at Christchurch (17.36) and also over 390m at Southland (22.72) and according to my breeding records she has one previous litter on file, three dogs and five bitches, whelped in March 2015, by Disintergrate.

She is from a handy litter, of four named, which included Cawbourne Combat, Endless Dream and Sugar Hit Daisy, with their dam’s only other litter on file, whelped in May 2011 by Knocka Norris, having three named, Long Flat Black, Premier Black and Premier Blue.

Cawbourne Pilfer also did all of her racing in New Zealand, where she had 22 starts for six wins and six placings, all over 295m at Christchurch (17.38) and she has one previous litter on file, four dogs and three bitches whelped in March 2015, by Spring Gun.

She is a proven producer with two successful litters on file, whelped in December 2012 by Collision, then February 2014 by Barca Bale so the well bred youngsters in this litter should attract plenty of interest.

She is from a litter of four named, which included Amanda Rumble, Tobias Rumble and Tweed Aura, with their dam also producing many good winners from her other litters, by Bombastic Shiraz, Collision, Kiowa Mon Manny*, Premier Fantasy* and Where’s Pedro. 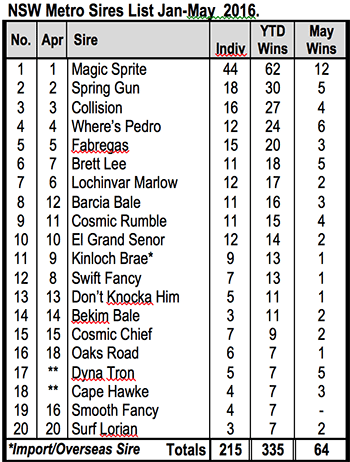 THE NSW Metropolitan Sires list for the five months to the end of May sees Magic Sprite’s wins more than double his nearest rival, after his offspring won another 12 races at Wentworth Park in May.

He now sits at the top of the list with 62 wins, from 44 individual winners, followed by Spring Gun with 30 wins, Collision with 27 wins, Where’s Pedro with 24 wins and Fabregas with 20 wins completing the top five.

Just outside the top 20 at the end of May, with six wins each are, Nitro Burst,, Turanza Bale and Glen Gallon, followed with five wins each by Dyna Lachlan, Big Daddy Cool, Mogambo and Miagi.

Winners for the top five May sires at Wentworth Park, and their dams, were as follows:

COURSING in Victoria was at Lang Lang last Sunday where the club played host to the Victoria Coursing Club, and their Cup was the main event on the 12 event program.

The Andrew Paraskevas trained, Better Than This (October 2013 Knocka Norris x Father Of Mine) defeated the improving Sun Choice in the first round then went on to defeat pre race favourite Flash Riot in the semi final, before accounting for Brendan Dewan’s, Dewana Result (July 2012 Cosmic Rumble x Wildcard Lass) in the final.

The Little River Hotel 1 limit stake was won by the Paul Ellul trained, Robacola (September 2013 Symmetry x She Can Sal) who was too strong from Needs Wings (December 2013 Nolen x Alotta Mojo) in the final.

Coursing this week goes to Longwood where the club will play host to the Melton Coursing Club who will conduct the Western Saws Cup, with two one limit stakes in support on a 12 event program.

KINBRAE MILLY (Blac bitch, May 2013 Kinloch Brae* x Lady Arko) Raced 16 times for one win and seven placings before last start win over 720m at Wentworth Park on May 25, from box 1 beating Crystal Fire and Detroit Lyon. Came off consecutive seconds over 618m at Richmond, fifth over 535m there, sixth over 600m at The Gardens and a win over 450m at Maitland. Her dam, Lady Arko (April 2008 Where’s Pedro x Zarbo) was an outstanding, at times luckless stayer who raced 36 times for 16 wins and nine placings. Stayers usually take a while to reach their peak but this one has all the potential.

COSMIC ACT (Fawn dog, September 2014 Cosmic Rumble x Dewana Savanna) Well bred pup who came from box five on debut over 515m at Sandown on May 29 when beaten four lengths into second place by Chief Bale (29.69) Bit stiff to come up against one that runs that time in a Maiden when you’re having your first start. Better for the run and could go one better next time.

Got a question on Coursing, and of our sires and brood bitch lists, or want to send us news on a litter you’ve just bred, or any greyhound racing related question, simply email me at [email protected]

Sweet It IS litter missed ??