THIS week’s review of litters from the Victorian Litter Registrations list for the week ending May 9, starts with a nice litter of eleven pups by Melbourne and Australian Cups winner Dyna Double One (March 2013 Barcia Bale x Crystin Bale).

She is from a litter which included Altena Bale, Cheria Bale, Dyna Irvine, Euro Bale, Fourier Bale, Hawker Flex, and Henchey Bale, with their dam’s only other litter on file, whelped in November 2012, by Collision, producing Dixon Bale, Earl Bale, Flame Bale and Governor Bale. 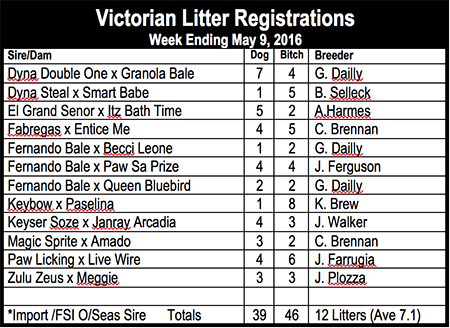 Itz Bath Time is from a handy litter which included Dandy Kid, Lake Cosmos, Mad Russian, Murradoc Whiz, Steve Natural and Woodland Jack, with their dam having only three other named offspring on file, Crystal Injected and Turbo Injected, who were whelped in September 2012 by Fear Zafonic*, then Every Cloud, whelped in April 2013 by Oaks Road.

She is from a handy litter, which included Amado, El Henley, El Rosa, El Stonier, Lily Where’s Mum, Lizzy Tibay, Lost For Words and Lucky Star, with the dam having winners on file from her three other litters, whelped in October 2008 by Pure Octane and June 2007 and December 2010 by Elite State.

She has two previous litters on file, with winners from her first litter, whelped in October 13, by Premier Fantasy* which produced, Ads Boy, Denya, Enticing Affair, Koch, Lady Capulet, Little Mix, Pop Ya Bubble and Stefanovic, then she whelped a litter of dour dogs and four bitches by Cosmic Rumble, in May 2015.

Colin also has a litter of three dogs and two bitches on the list this wee, by Magic Sprite (March 2008 Brett Lee x Glamorous) from Entice Me Juliet’s litter sister Amado.

Her sire, Disintergrate (April 2007 Collision x With Integrity), whose dam is by Token Prince x Thai Charm (Rapid Journey x Thai Magic) is beautifully bred and although he hasn’t had a very high profile as a sire, he has produced some good winners, and probably falls into the category of “under-rated”.

OUR final litter for review from this week’s Victorian list is one of ten pups, by outstanding sprinter and stud prospect, Paw Licking (March 2011 Elite State x Kingsbrae Di).

She is from a litter which included Cream Crackered, Ethan Junior, Sphinx and Sweet Lips, with their dam’s only other litter on file, whelped in September 2013, by Dyna Tron, producing Suspicious Cal, Suspicious Col, Suspicious Joe, Suspicious Lee, Suspicious Pete and Suspicious Sam, with all but Suspicious Col winning, and he has been placed in five of his 12 starts. 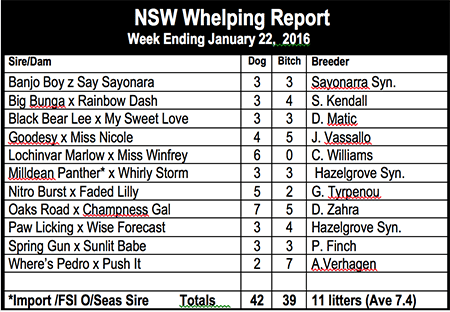 TURNING our attention to the NSW Whelping Report for the week ending January 22, our first litter for review is one of seven pups by the 2010 Group 2 Tweed Galaxy winner, Big Bunga (April 2008 Hallucinate x Special Sauce) whose dam is by Tambray Gravy x Macbai Maree (Token Prince x Undermatched).

Big Bunga is from a litter of four named, which included Fawntastic, Limit Breaker and Thickness, with his dam also producing winners from her three other litters, whelped in October 2009 by Big Daddy Cool, June 2012 by Magic Sprite and May 2013 by Don’t Knocka Him, with a total of 12 named offspring from four litters.

NEXT we have a nice litter of nine pups by the outstanding sprinter and stud prospect, Goodesy (November 2007 Collision x Frosty Fruits).

She has two named offspring on file from her first litter, of three, John Girl and Keiras Magic, who were whelped in January 2014, by Magic Sprite.

A Dozen for the Road

She is from a litter of five named, which included Big Date, Dale, Out All Nite and Where’s Mindy, with their dam’s only other litter on file, whelped in April 2013 by Fabregas, producing Fabrawhat, Night Mona, Night Spark, Snake A Gully, Starz Fun, Tricky Trey and Vampire Hunter.

According to my breeding records she has one previous litter on file, six dogs and four bitches, whelped in April 2015 by Lochinvar Marlow so she has now produced 21 pups in two litters.

Nine pups for Push It

She is from a litter of two named, which included Joke’s On You, with their dam’s only other litter on file, whelped in October 2010 by Dual Enforcer, having seven named, Ausbred Enforcer, Cane D’oro, Dual Feature, Dual Injected, Dual Skinny, Reese’s Bay and She’ll Enforcer. 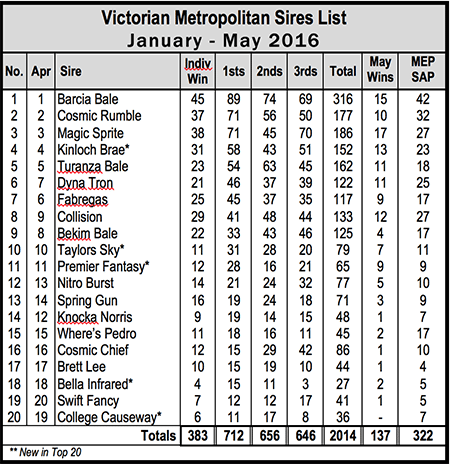 BARCIA BALE has maintained his place at the top of the Victorian Metropolitan Sires list at the end of May, after his offspring won 15 races on Melbourne’s two city tracks during the month.

He now leads with 89 wins, from 45 individual winners, 18 more than Cosmic Rumble and Magic Sprite, who both have 71 wins, with Kinloch Brae* 58 wins and Turanza Bale 54 wins, completing the top five.

Winners for the top three May sires, and their dams, were as follows:

AGRA’s breeding rankings for the five months to the end of May have been released, with the ranked positions determined by a points system applied to all Group races on a sliding scale of points first to eighth.

COURSING in Victoria was at Longwood last Sunday, where the $1000 to the winner Western Saws Cup was won by the Leonie Dalton trained, Arby (Magic Sprite x Cyclone Babe) who defeated Ribacola (Symmetry x She Cal Sal), trained by Paul Ellul in the final.
The two, one limit stakes were won by Carlanna Jobe (El Grand Senor x Showood Ellie) who had a walkover in the final when Lagoon Mist was scratched, and I’ve Got Wings (Knocka Norris x Time And Money) who defeated John’s Magic (Spring Gun x Magic Castle) in the second final.

The next coursing meeting is at Lang Lang on Sunday June 19, featuring the first week of the Sylvester Doyle Puppy Championships and the Ray Boundy Memorial, which conclude on Sunday June 26.

SHE’S ROXZANN (Fawn bitch, May 2014 Big Daddy Cool x It’s A She) Tasmanian bred bitch who was beaten 17 lengths at first start, over 515m at Sandown on May 16 after being slow out from box two and never recovering. Improved substantially second start, from box one over 515m at Sandown again on June 5, when third, beaten less than a length in a close finish, behind Dyna Dalma and first starter Miss Baroque, in 30.19. On the improve and worth following as she gains more experience.

COSMIC ACT (Fawn dog, September 2014 Cosmic Rumble x Dewana Savanna). Showed pace at first start, Sandown 515m on May 29 from box 5, when beaten 4.5 lengths by Chief Bale, before second start, Sandown June 5, from box three when second again, beaten seven lengths by Fanta Bale who ran 29.36. Gotta be stiff striking one that quick in a maiden heat so watch out as he gets more experience.

Got a question on Coursing, any of our sires and brood bitch lists, or want to send us news on a litter you’ve just bred, or any greyhound racing related question, simply email me at [email protected]